Collaborative entry Last edit by: markmjcampion a day ago
Croagh Patrick, aka The Reek, is an instantly recognisable conical seaside peak a few k SW of Westport. It’s one of the country’s busiest hills with a significant amount of summiteers on one ...

billbaggins 6 days ago
A’Mhaighdean and Ruadh Stac Mór are two of the more remote Munros. Their summits provide some of the best views in Sc... walk, Len: 39.5km, Climb: 1748m, Area: Loch Maree to Loch Broom (Britain) A\'||

eamonoc 4 days ago
Climbed as first of three Carns in the heart of the Bluestack Mts, approach from minor road at Northern end ofLough Eske

Coast Summary Collaborative entry Last edit by: Sweeney 5 days ago
The Sturral is a little known, but striking headland on the west coast of Donegal. To gain the summit requires walking on exposed steep terrain, with a scrambling route then back towards eith...

Sweeney 5 days ago
Headed out to climb the Sturral from Port to the west. Scrambled directly along the ridge, and then turned around at the last steep few metres to the top, as it involved 1 committing climbing...

Fergalh a week ago
Parked at 657638 Underneath Rinvyle Castle beside the beach. Followed track through two gates until 650641 than turn North west to the point. From here if the tide is out it is a short walk t...

Fergalh a week ago
Parked at 932273 and strolled over bridge to island. Turned right and at 931273 walked up a green lane past a orange house until i reached a T junction. Here i turned right and than crossed w...
Most Recent Monthly Newsletter.
Conditions and Info
Use of MountainViews is governed by conditions and a privacy policy.
Read general information about the site.
Opinions in material here are not necessarily endorsed by MountainViews.
Hillwalking is a risk sport. Information in comments, walks, shared GPS tracks or about starting places may not be accurate for example as regards safety or access permission. You are responsible for your safety and your permission to walk.
See the credits and list definitions.

Park at Lettergesh Beach car park. The rocky summit dome of Benchoona is already visible off to the left. Walk back up to the road and turn left. 150m further on is a little unsignposted lane going up to the right. This GPS track begins and ends at the entrance to the lane.

The lane goes past several houses then comes to a gate with a "Keep Gate Closed" sign. Go through it, and the lane continues up quite steeply to a water treatment plant on the hillside. (This is clearly visible from the road, so if the route is unclear, look for the plant and try and trace the lane down from it.)

Past the water treatment plant, the lane turns into a grass and gravel track. Soon it comes to a second gate, this one bearing a "No dogs allowed" sign. Go through the gate, unless you have or are a dog. The track continues with a stream with very steep banks on the right. After just a minute or so, the track crosses the stream via a sturdy concrete bridge. Don't cross the bridge, but head off the track and to the left to Benchoona,
whose rocky dome (not really a dome, but it looks like one from this side) is still just visible over the nearer slopes.

The second ("No Dogs Allowed") gate, with the stream running alongside it on the other side of the fence. Benchoona is off to the left. Altnagaighera is just visible on the skyline: 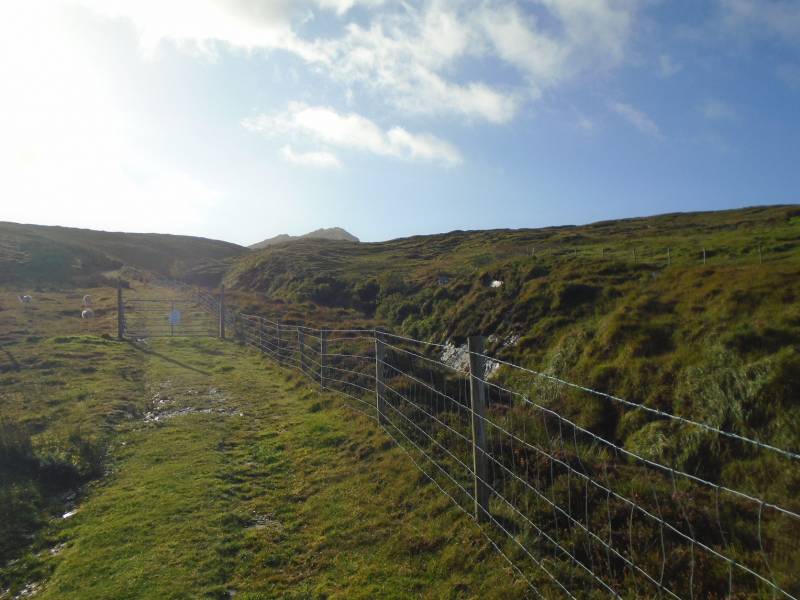 The route from here to the top is a matter of preference. My route could probably be bettered, but it got me there without much drama, just a lot of zig-zagging on the rocky high slopes (no scrambling needed).

It's all easy walking from Benchoona onwards, with no substantial ascents. The walk along the pleasantly narrow ridge to the minor top referred to variously as Altnagaighera/Binn Fraoigh/Garraun SW is well worth doing, and the descent from there is easy, though there are a few rocky outcrops to be avoided further down.

The ruins of a structure of some sort on the slopes of Bechoona. The little gorge running through the bog is also visible in the middleground: 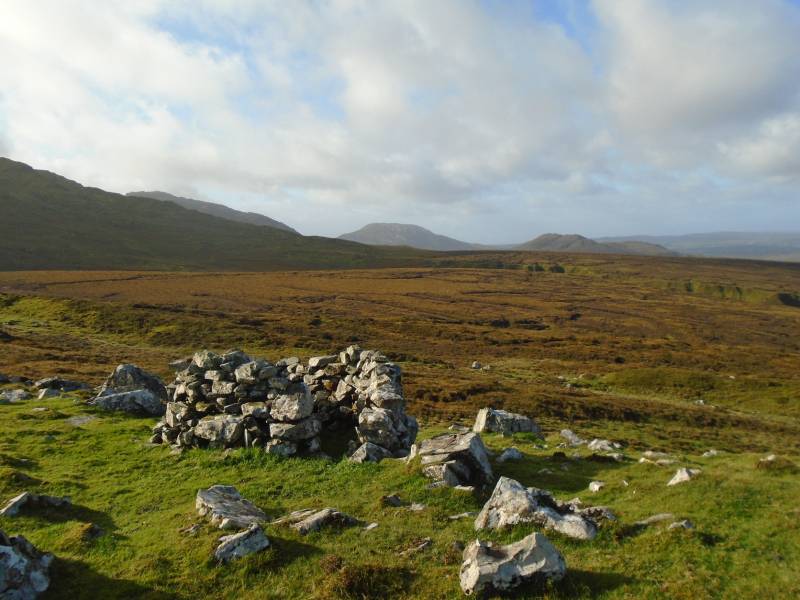 On the descent from Altnagaighera and in the boggy plains below it's best to stay right of the stream that starts on the mountainside and leads all the way back to the bridge that you didn't cross on the way up. This stream has formed a little gorge through the bog which is a nice feature. Anyway, finally cross the aforementioned bridge and back down the lane past the water treatment plant and there you are.

The journey time that appeared when I created and uploaded the GPx is not accurate and not the same time as appeared when I synced my watch with Garmin Express. It took 2 hours and 6 minutes, not 1 hour 40. (And distance was 9.33km, rather than 8.8km.) This time is for a solo walk with only a few quick photos stops and including a bit of running on the descent. 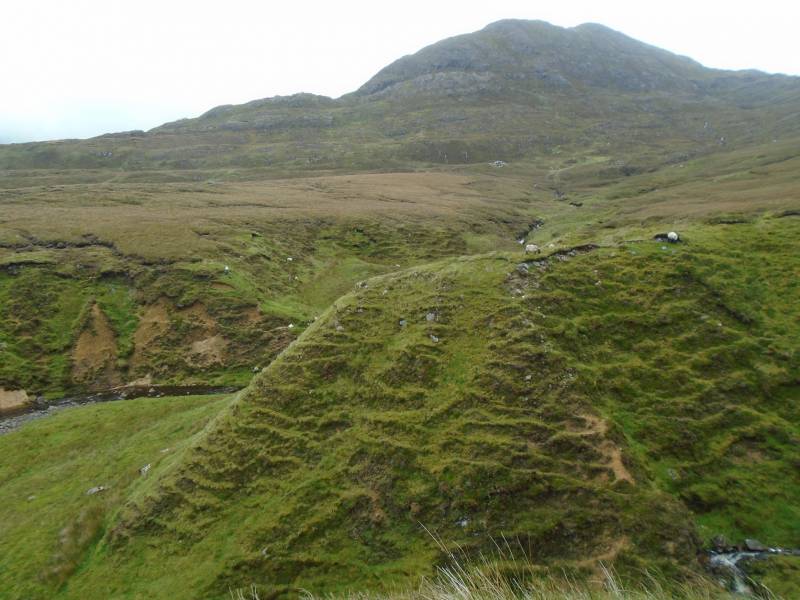 NOTE: ALL information such as Ascent, Length and Creator time taken etc should be regarded as approximate. The creator's comments are opinions and may not be accurate or still correct.
Your time to complete will depend on your speed plus break time and your mode of transport. For walkers: Naismith's rule, an approximate though often inaccurate estimate, suggests a time of 2h 47m + time stopped for breaks
NOTE: It is up to you to ensure that your route is appropriate for you and your party to follow bearing in mind all factors such as safety, weather conditions, experience and access permission.