Collaborative entry Last edit by: simon3 3 days ago
Binn Mhairg or ‘Peak of Woe’ has a slightly off-line location. Situated as it is at the end of a ridge extending 500 metres north from Binn Chaonaigh, it is just that bit too isolated to attr...

InTheFade 4 days ago
A nice hike up Gleann na gCapall up to Lough Erhogh ascending up the back to saddle between Mangerton and Mangerton Nort walk, Len: 11.6km, Climb: 733m, Area: Mangerton (Ireland) ||

paddyhillsbagger a day ago
One of the joys of scaling Abbey Hill is the abundance of flora & fauna on it's slopes.Climbing It for the 3rd time with my brother & his daughters with their young & keen eyes uncovered an u...

This walk uses Onzy's suggested access point for Doughruagh, a makeshift pallet gate along the N59 beside the parking spaces at an old quarry site. Instead of going straight up Doughruagh from the col, I went down the far side to the secluded Lough Knappagh, which lies between Doughruagh and Altnagaighera/Garraun SW Top.
The lake is in a very secluded spot hemmed in by hills on three sides and looking down to Lettergesh, the Atlantic and the Mayo islands on the fourth. Even from Doughruagh itself, it's mostly invisible, unless you go to the extreme north of the summit area.

Looked at from the lake, Doughruagh and Altnagaighera form an intersesting contrast, especially on a sunny day. The former is black, craggy, permanently in shadow and faintly menacing; the latter is bright green, sunlit and speckled with sheep. 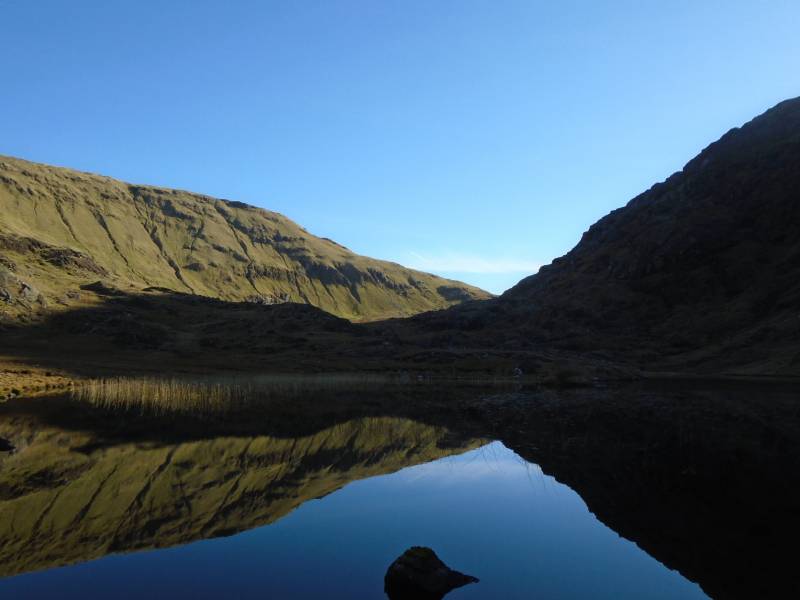 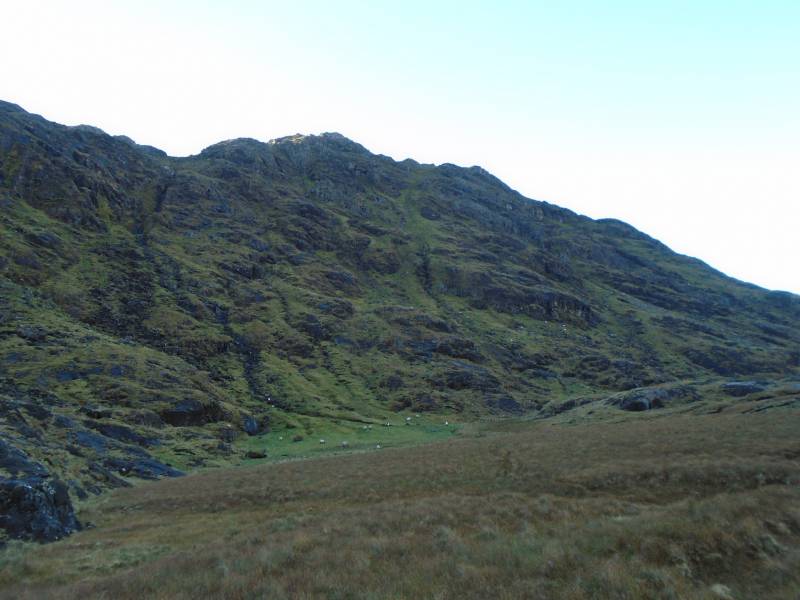 I wanted to ascend Doughruagh from this side A) for novelty and B) for a challenge. Its north face is its steepest as well as hardest to get to. The easiest line here would be by ascending from east of the lake. But as I walked around the lake I took a rockier line a bit further west instead.

My ascent line started among the boulders at the right of the photo below. At the end of the boulder field I headed right initially. I scrambled a bit, but then decided it was too exposed/difficult and headed well left to end the ascent on the easier grassy line going left to right in the centre of the photo: 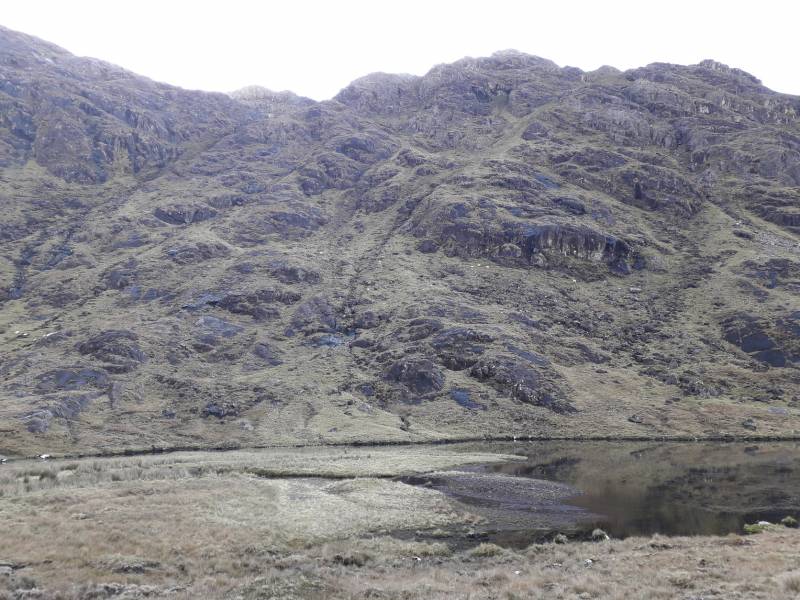 I visited the summit and the south top, staying almost half an hour at the top in the late autumn sunshine. A couple of hundred metres southwest of the south top, I saw a large cairn, just beyond it a small cairn on the slope. I hadn't planned to descend this side, but I thought perhaps this indicated a good route. There seemed to be a faith path away from the cairn that led to a short scramble through the small cliffs that go right along the southern side of the mounain just beneath the summit. It was probably as good a way through these cliffs as any. After this, all signs of a path disappeared.

My final objective was the Sacred Heart statue that sits above Kylemore Abbey. There is a path up to the statue from the Abbey, but it's only open for guided tours. From above, the approach to the statue is on slopes almost wholly covered in heather (after the scramble at the top), quite a contrast with the other side of the mountain.

On the descent, looking back up to the rocks guarding the summit: 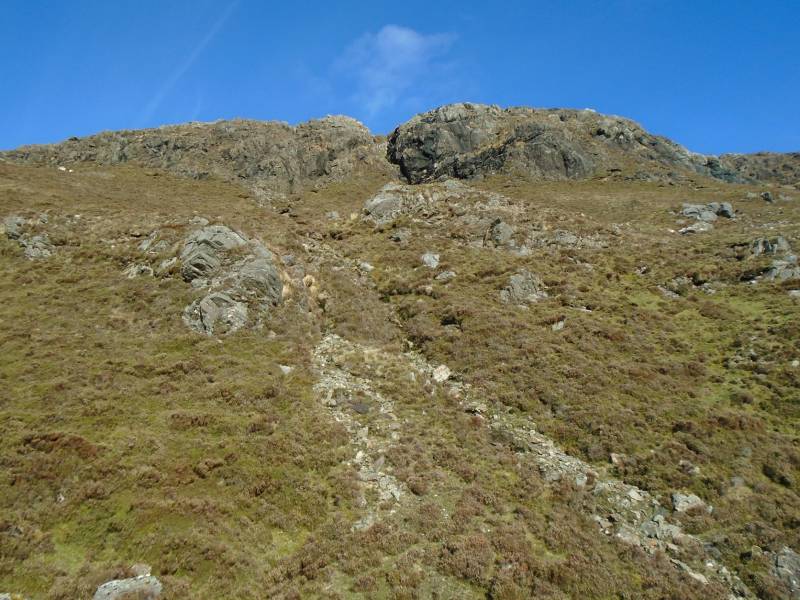 After another long break at the statue, I followed the track that leads along the side of the mountain, leaving it to return to my car on the shores of Kylemore Lake. It had taken over 3 and a half hours, longer than I had planned. But there's plenty to enjoy around Doughruagh, and such is the isolation (there was nonbody else on the hill all day) it's very easy to forget that for part of the walk you're just minutes from one of Ireland's most popular tourist attractions! 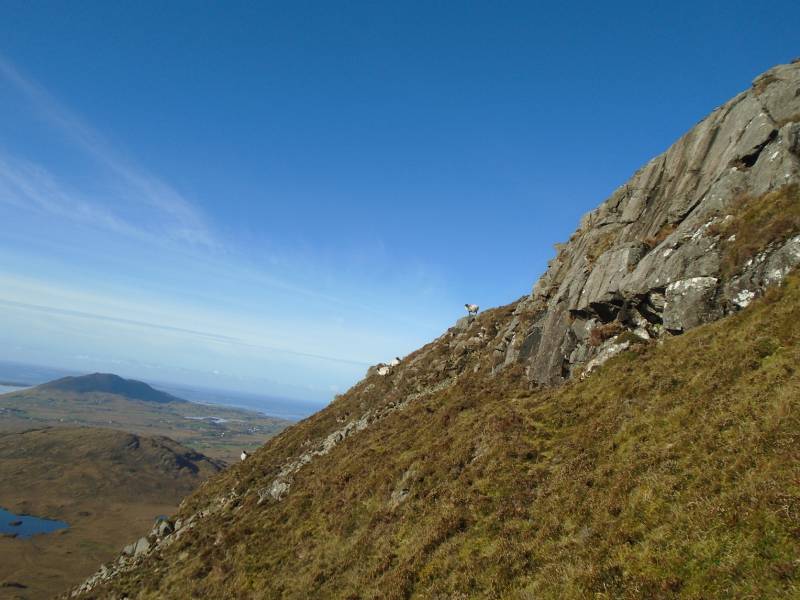 NOTE: ALL information such as Ascent, Length and Creator time taken etc should be regarded as approximate. The creator's comments are opinions and may not be accurate or still correct.
Your time to complete will depend on your speed plus break time and your mode of transport. For walkers: Naismith's rule, an approximate though often inaccurate estimate, suggests a time of 3h 9m + time stopped for breaks
NOTE: It is up to you to ensure that your route is appropriate for you and your party to follow bearing in mind all factors such as safety, weather conditions, experience and access permission.