Carrigleitrim: Well, that is that done.

ewen 2 days ago
Parked at the Black Hill car park on the gap road and went up over Sorrell Hill and down to the pull up to Carrigleitrim. That was the straightforward part. Trying to find a way onto the open hill...

Forum: General chelman7 2 days ago
My Garmin handheld GPS uses the Topo UK and Ireland v6. I see that v8 is now available on the garmin website. Does anyone know if there is much difference between the versions?

markwallace 3 days ago
A walk along the Carrigaline to Crosshaven Greenway. Carrigaline is very easily reached from Cork City by the frequent B walk, Len: 7.4km, Climb: 24m, Area: South Cork (Ireland) ||

magnumpig 6 days ago
Just found the photo on my phone this morning! I took this photo at 3am one Saturday morning last June, struggling home from a few bevvies in Manorhamilton. Benbo dominates the view from my kitche...

simon3 a week ago
You may want to come off the ridge between Binn Gabhar (Bengower) and Ben Lettery, if you have left a car somewhere near Derryclare and have been doing the horseshoe. Below is a picture of the rid...

Aidy a week ago
First day on the hills of 2020, and my penultimate county high point. Lucky to get good conditions after the long drive down to Co Kilkenny.

Forum: Suggestions simon3 a month ago
MountainViews has been describing "Coastal Hills" for the island of Ireland. They are places which typically overlook the sea and may form part of coastal walks. They are defined as being within ...

Lauranna a week ago
Brocken Spectre from Summit of Carrauntoohil in Winter Conditions
Most Recent Monthly Newsletter.
Conditions and Info
Use of MountainViews is governed by conditions and a privacy policy.
Read general information about the site.
Opinions in material here are not necessarily endorsed by MountainViews.
Hillwalking is a risk sport. Information in comments, walks or shared GPS tracks may not be accurate for example as regards safety or access permission. You are responsible for your safety and your permission to walk.
See the credits and list definitions.

Visit our Facebook page.
Video display
ColinCallanan: Track 3725 in area near Tievebaun, Dartry Mountains (Ireland)
An enjoyable route up to Tievebaun with stunning views into Donegal.

This was a very enjayable walk. We started in the carpark which has an information board titled "Eagles rock". 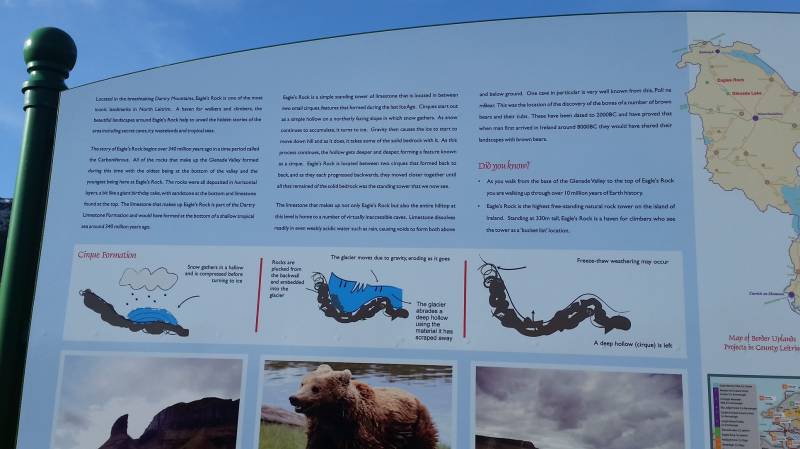 However, after meeting a local farmer he informed us that this information was misleading, and that eagles rock is not the impressive structure in the photo below (let's call it eagles rock 1): 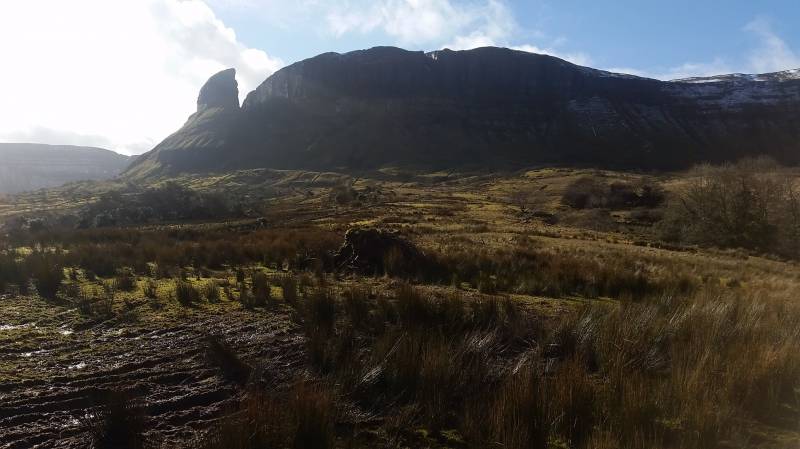 But is actually the following smaller rock, seen on the left in the below image (lets call it eagles rock 2): 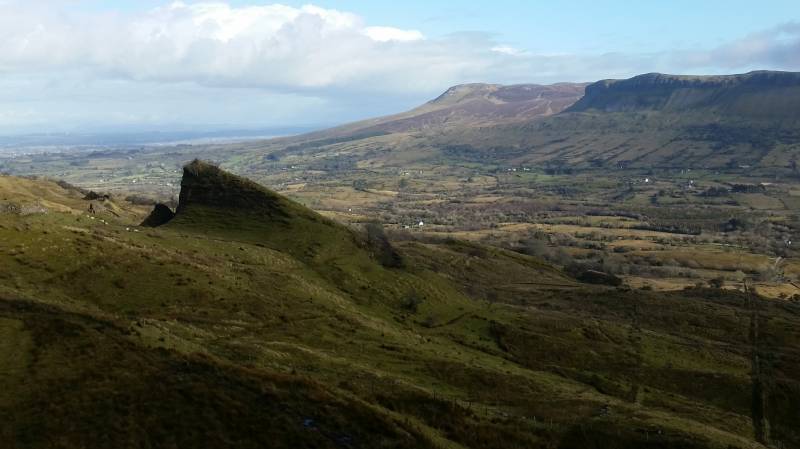 From the carpak, a path leads up to this smaller rock structure. The man advised us that we could park in the carpark and take the path up this this smaller rock without any trouble. We said we might consider continuing on to summit Tievebaun and/or Truskmore from there also, and to this the man advised that it would be safe to do this also and there is a way up. We were told that cars had their windows smashed in this carpark, but thankfully I drive an old banger so I wasn't very worried about this.
We found the track up to eagles rock 2 was very good, and would be suitable for young families. It gets very muddy just before you get to the rock, and you'll need to fence hop a bit to get into the rock itself and climb it.
We continued on and found a useful path with switchbacks al the way up to almost 350 metres. This made ascending easy enough, but when you get to the 400m line, I would advise you not to take the route I took in this GPS, but to instead bear more to your left to find a more managable elevation profile. I ended up scrambling and climbing a bit from 400m onwards and some sections were a bit dangerous if you are not used to scrambling in heather and brush. We also had a good bit of snow to contend with so this added to the risk factor.
Views from the top were magnificent, with Slieve league in the distance, as well as the bluestack mountains topped with an icing of snow. The local mountains like keeloges, aroo and aghalateeve all looked magnificent on this sunny day in February, as well as glenade valley and lough. This is a very accessible, short but highly rewarding hike indeed.
A few more photos from the day:

Note: ALL information such as Ascent, Length and Creator time taken etc should be regarded as approximate. The creator's comments are opinions and may not be accurate or still correct.
Your time to complete will depend on your speed plus break time and your mode of transport. For walkers: Naismith's rule, a rough and often inaccurate estimate, suggests a time of 2h 4m + time stopped for breaks
Note: It is up to you to ensure that your route is appropriate for you and your party to follow bearing in mind all factors such as safety, weather conditions, experience and access permission.