A mountain bike is very useful when visiting these hills. Around 11 kms of the route can be cycled which saves time and avoids a lot of walking on gravel tracks. Most of the time is saved on the bike journey back to the road after visiting the hills. Biking the 5.5 kms towards the hills involves 260m of ascent, some of it quite steep. A fast walker will cover that part of the route almost as quickly as some bikers. The very enjoyable, long freewheel back to the road at the end of a long day though, is more than adequate reward for the tough cycle in.
The three Munros are more usually visited over two days with one day devoted to Sgúrr Choinnich and Sgúrr a’Chaorachain and another day devoted to Maoile Lunndaidh itself. Given the right conditions, all three can be visited on one day as was the case when recording this track.
Parking is available at a car park for hikers (and bikers) located up short a lane, signposted Achnashellach, that emerges on the north side of the A890 at NH 0401 4926. After leaving the car, return to the A890 and cross it to the track opposite which leads to a well-maintained level crossing on the train line from Dingwall to Kyle of Lochalsh. Train drivers usually give a courteous toot as they near the crossing to warn of their approach. The track runs parallel to the railway for about 700 metres before dropping south to a bridge over the River Carron then follows the route of the Allt a’Chonais towards the hills. 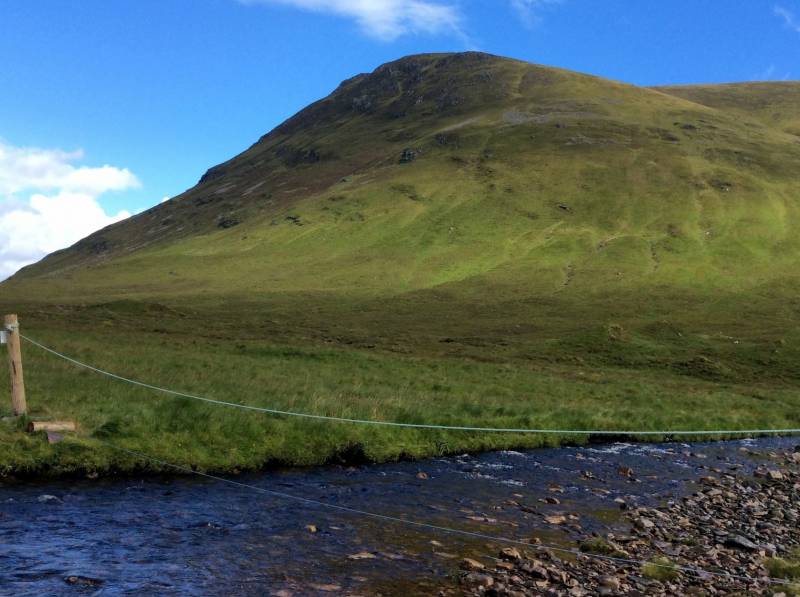 The rope bridge at NH 076 465​ with Sgúrr nan Ceanaichean in the backgound
After climbing away from the Allt a’Chonais, the track descends and comes close to the bank again at NH 0722 4708 where there is a wire bridge. It is best NOT to cross here but to continue farther to NH 0741 4682 where a small cairn marks the start of a path down to another wire bridge at NH 076 465. These wire bridges consist of a taut wire cable (for feet) and a nylon hand rope stretched between timber posts. A small sign warns users that they do so at their own risk! It’s fun to cross using the bridge though, even when the water is so low that the bridge is not needed. 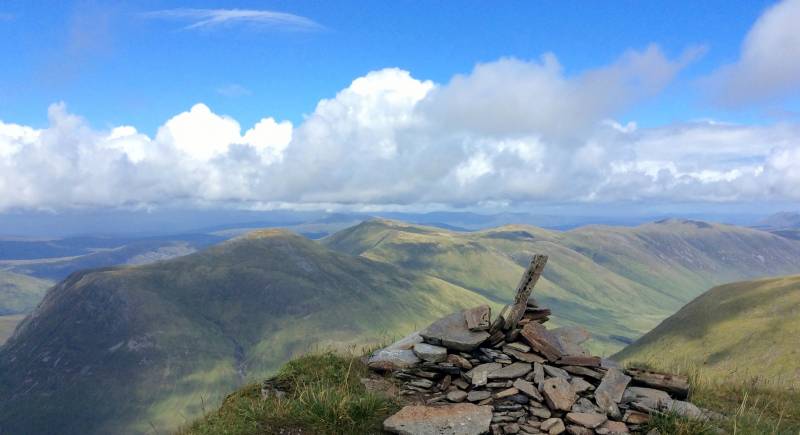 Sgurr nan Ceannaichean and Moruisg from summit cairn Sgúrr Choinnich
After crossing the burn a nice, though in places wet, path leads up to the Bealach Bhearnais. The west ridge of Sgúrr Choinnich now gives a pleasant route to the summit. On a clear day there are good views to the surrounding hills, Sgúrr nan Ceannaichean, Sgurr nan Feartaig, Bidean a’Choire Sheasgaich and Lurg Mhór. The Coulin Hills, Maol Chean-dearg, Beinn Liath Mhór and Sgórr Ruadh and even the Torridon Hills may make an appearance. There are a few rocky steps to be negotiated, nothing too difficult, before reaching the small cairn at the summit, NH 0763 4461, 999m. 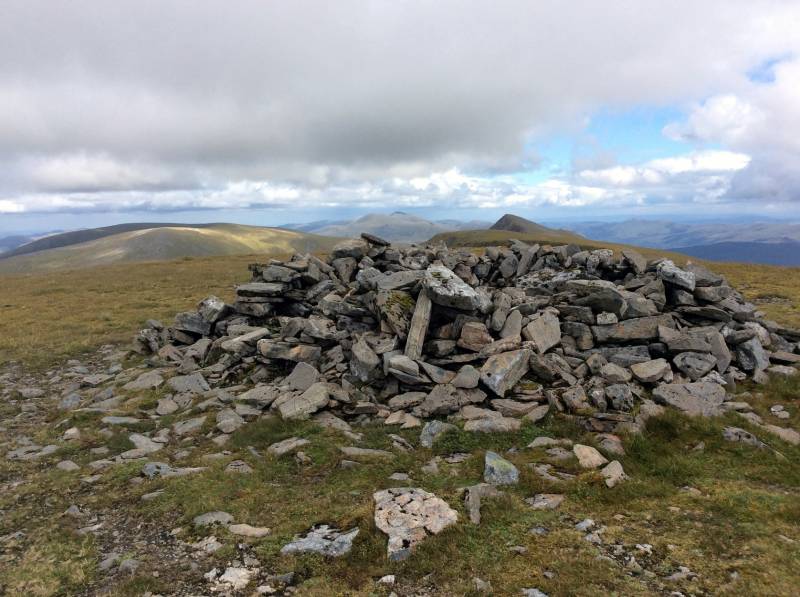 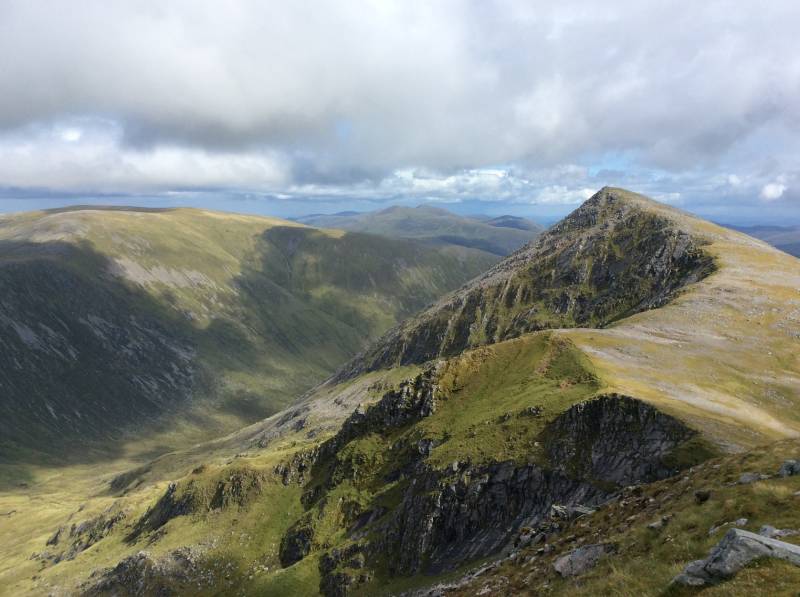 Maoile Lunndaidh and Bidean an Eoin Deirg
Now on the plateau, the route goes around the huge gash in Maoile Lunndaidh’s northern slopes, Fuar-tholl Mór, via the cairn at Creag Toll a’Choin, NH 1308 4531, 1005m, to the cairn marking the North Summit at NH 1351 4584. At present, 2022, the North Summit is designated the Munro, but measurements taken by the Ordnance Survey in 2015 indicated that Creag Toll a’Choin is actually slightly higher.
From the North Summit, the route descends easy ground to reach a path along the burn, Allt an Fuar-Tholl Mór, that flows from Fuar-Tholl Mór. After descending along this burn for some distance, cross it and head across rough ground towards Glenuaig Lodge. An Crom Allt and the River Meig will also have to be crossed to reach the track leading from Glenuaig Lodge back to the A890. It is almost 4 kms from Glenuaig Lodge to the path leading to the rope bridge and an additional 5.5 kms from there to the car park. A bike was used when recording this track. It took approximately an hour to cycle in and 40 minutes to cycle back out from the cairn marking the path to the rope bridge crossing. 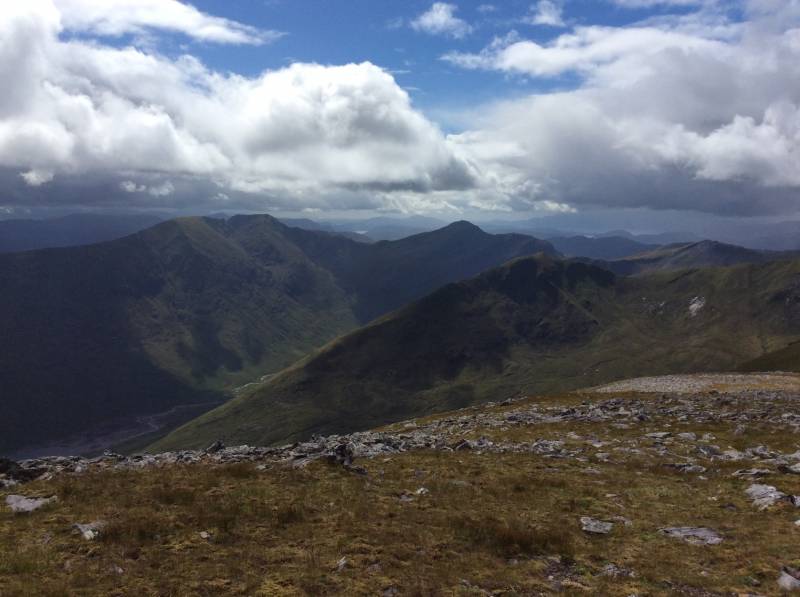 NOTE: ALL information such as Ascent, Length and Creator time taken etc should be regarded as approximate. The creator's comments are opinions and may not be accurate or still correct.
Your time to complete will depend on your speed plus break time and your mode of transport. For walkers: Naismith's rule, an approximate though often inaccurate estimate, suggests a time of 9h 9m + time stopped for breaks
NOTE: It is up to you to ensure that your route is appropriate for you and your party to follow bearing in mind all factors such as safety, weather conditions, experience and access permission.