Beinn Fhada is often walked in combination with A'Ghlas-bheinn, to its north, but it is such a fine hill that devoting a complete day to Beinn Fhada itself can be very rewarding.This track is a record of one such day.
As the scramble at Bealach an t-Sealgaire, NG 994 203, is less troublesome when approached from Meall an Fhuarain Mhoir, the route was walked in a clockwise direction.
Parking is available at Morvich, NG 960 210, where Kintail Mountain Rescue have a base. There is a voluntary charge for parking here. The donation box is located at the gable wall of a slated, stone walled building.
Fom the parking area, walk in an easterly direction, either along the road or on a path beside the River Croe, then north over the bridge across the River Croe at NG 968 211, and follow signage for the Falls of Glomach towards Gleann Choinneachain. At NG 981 222, where the path for the Falls of Glomach drops northeast to cross the Abhainn Chonaig, stay on the high path and continue heading in an easterly direction with the Abhainn Chonaig below on the left.

Beinn Fhada, left, with A'Ghlas-bheinn, viewed from Sgúrr a'Dubh Doire
The path crosses the Allt Coire an Sgairne at NH 003 213 upstream of a rapid. Crossing here is only problematic when the water is exceptionally high. The path then zig zags nicely up steep ground giving good views back to the glen. At the NH 007 213 path junction, follow the path going south up into Coire an Sgairne. When the path emerges from the corrie, it continues around the corrie rim, but this track leaves the path around the rim at NH 0108 1991 and climbs to the summit area and the cylindrical trig pillar of Beinn Fhada at NH 0186 1924, 1032m.

Ciste Dubh (929m), viewed across Fionngleann en route to Sgúrr a Dubh Doire
This track now goes south, then southeast, then east, on good ground to reach Beinn Fhada’s eastern top, Sgúrr a’Dubh Doire, NH 0348 1853, 968m. This track then returns towards Beinn Fhada, contouring under the summit, and on to Beinn Fhada’s other top, Meall an Fhuarain Mhóir, NG 9999 1961, 954m. 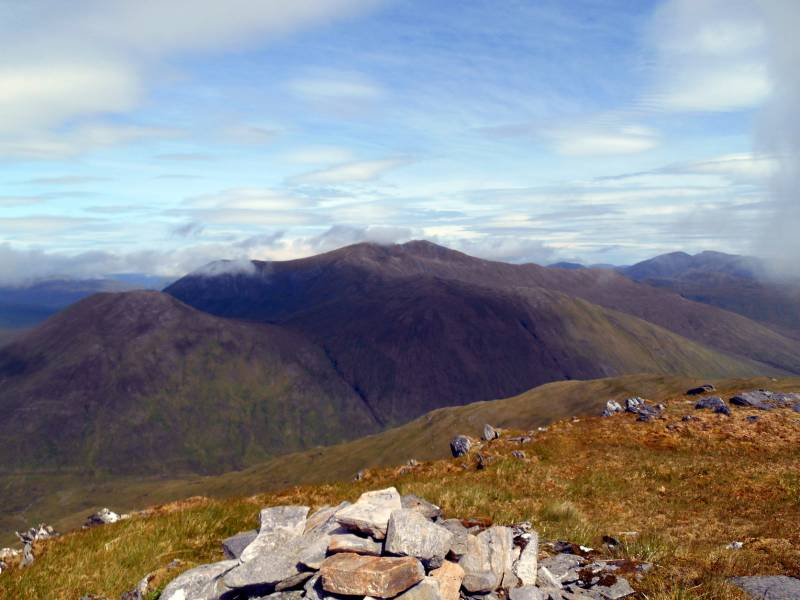 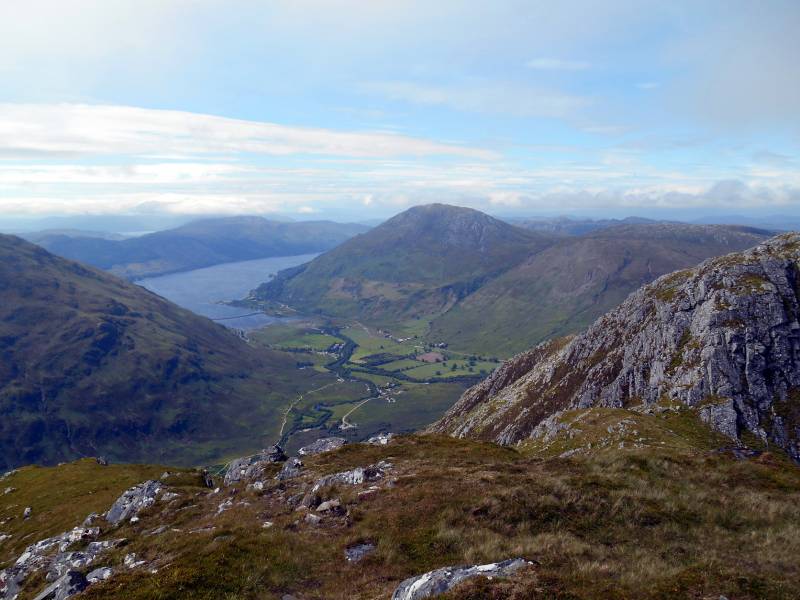 View to Loch Duich and Morvich approaching Bealach an t-Sealgaire
The track then heads northwest, with some nice ridge walking and easy scrambling, to Bealach an t-Sealgaire, the Hunter’s Pass.
There is a steep, slabby section to be ascended here which should not pose a major difficulty in dry weather but might be too tricky and daunting for some in wet or icy conditions. If not happy to proceed, it is no hardship to retrace the route back to Meall an Fhuarain and follow the path around the rim of Coire na Sgairne to descend via the ascent route. 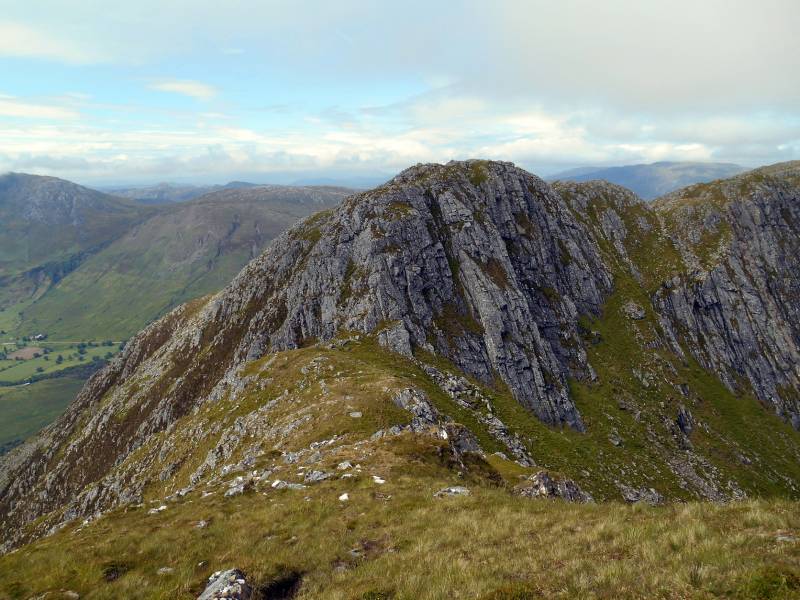 Bealach an t-Sealgaire, the Hunter’s Pass
After the scrambling ascent at Bealach an t-Sealgaire, this track continues over interesting ground to Sgurr a’Choire Ghairbh and Faradh Nighean Fhearchair before descending to Beinn Bhuidhe. Descending from Beinn Bhuidhe, the ground becomes wetter and boggier so it a relief to meet the path and road back to Morvich.
As Beinn Fhada is situated on Scottish National Trust property, there are no deer stalking issues or restrictions on access. This is due to the foresight and generosity of Percy Unna. When Mr Unna was a young man, he was chased off hills, I think in Kintail, lest he interfere with stalking. Later in life, having had a successful and rewarding career in civil engineering, he arranged the purchase of extensive lands in Kintail and other areas of Scotland, and by making anonymous donations to the Scottish National Trust, ensured that they could be accessed and enjoyed by all.

NOTE: ALL information such as Ascent, Length and Creator time taken etc should be regarded as approximate. The creator's comments are opinions and may not be accurate or still correct.
Your time to complete will depend on your speed plus break time and your mode of transport. For walkers: Naismith's rule, an approximate though often inaccurate estimate, suggests a time of 6h 43m + time stopped for breaks
NOTE: It is up to you to ensure that your route is appropriate for you and your party to follow bearing in mind all factors such as safety, weather conditions, experience and access permission.