Colin Murphy a day ago
Douglas Top doesn't have too many redeeming features, unless you count the ease with which it is bagged, but among them is the fine view to the north west of Slemish, standing in splendid iso...

Collaborative entry Last edit by: Colin Murphy a day ago
There is parking for a single car at D25309 03212. Walk about 15m south back along the road and you will see a very basic style and a sign advising walkers to follow the white poles. Follow t...

Colin Murphy a day ago
The final top in a 4-top bagging day in Antrim Hills. This is a nice little hill with a fine aspect when viewed from the east, with a plunging slope dropping about 170m. A track (not bad but ...

Collaborative entry Last edit by: markmjcampion a day ago
Galtymore is one of the country’s top ten highest peaks and commands wide sweeping views over much of the S midlands incl. the Ballyhouras, Knockmealdowns, Comeraghs and Mt. Leinster. It has ...

Collaborative entry Last edit by: Colin Murphy a day ago
On starting point is from D19944 23284 where you see a low white sign reading Cloch Ghlas, and there is parking for a single car. Cross the road, hop a gate and fence and proceed up the grass...

Collaborative entry Last edit by: Colin Murphy a day ago
One starting point is from D12290 29427, where there is parking for a about 6 cars. Cross the road where you’ll see a sign for the Croaghan Way. This trail is narrow and in poor condition in ...

Ben Dash: Take a dash off the track to the Ben of the same name!

Fergalh 2 days ago
On a recent stroll along the Mid Clare Way (Map 9) i took a dash off the track at the second of two communication towers (the smaller one !) to revisit Ben Dash. There is a track to the left ...

Caherconree: views on a clear morning

mh400nt 3 days ago
Having been up Caherconree a few times over the last 12 months(i'm relatively new to this walking) and its 50/50 for clear views.for me, the easiest ascent is coming up via the fort, starting...

Brickany: Distinctive hill on the way to Annascaul with views over Inch beach

A Munro and a nice Corbett

billbaggins 2 weeks ago
Moruisg is easily reached from the A890 so can provide a useful short day if passing through Glencarron. Moruisg ... walk, Len: 12.3km, Climb: 992m, Area: Moruisg, Kyle of Lochalsh to Garve (Brit|...

Bird Hill: Legends of The Bird

Kilgarvan 6 days ago
Bird Hill is named after a natural rock formation in the shape of an eagle near the summit. It can be clearly seen from the road below. From the same viewing point can be seen the Comhla Bhre...
Most Recent Monthly Newsletter.
Conditions and Info
Use of MountainViews is governed by conditions and a privacy policy.
Read general information about the site.
Opinions in material here are not necessarily endorsed by MountainViews.
Hillwalking is a risk sport. Information in comments, walks, shared GPS tracks or about starting places may not be accurate for example as regards safety or access permission. You are responsible for your safety and your permission to walk.
See the credits and list definitions.

Visit our Facebook page.
Video display
billbaggins: Track 4752 in area near Moruisg, Kyle of Lochalsh to Garve (Britain)
A Munro and a nice Corbett

Moruisg is easily reached from the A890 so can provide a useful short day if passing through Glencarron. Moruisg is usually combined with Sgúrr nan Ceannaichean, a Corbett, to its south west.This track is a record of a hike which combined both hills. Plenty of parking at a layby on the A890 at NH 080 520. The layby is on the right when travelling from Craig, on the left when travelling from Achnasheen.
There is a gate at the layby and the path beyond the gate leads to a bridge over the River Carron and then on to an underpass under the Dingwall to Kyle of Lochalsh railway line. The land between the railway line and the hills is wet and wearers of leaky boots may suffer. The ascent of Moruisg is quite straightforward. The route passes through a fenced off, conservation area and then ascends steep grassy slopes to the summit ridge. There is a large cairn at NH 1029 5019 but the true summit is at NH 1012 4993, marked by a much smaller cairn, approximately 315m south west of the large cairn. 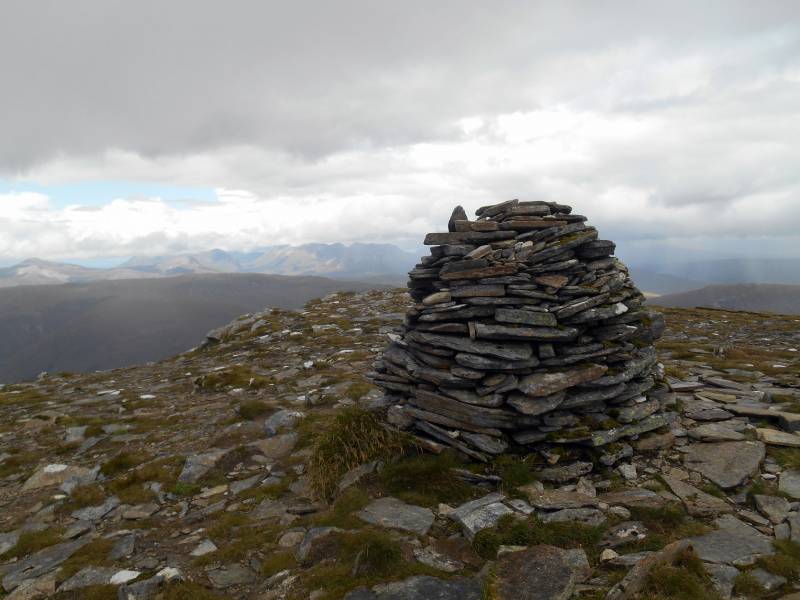 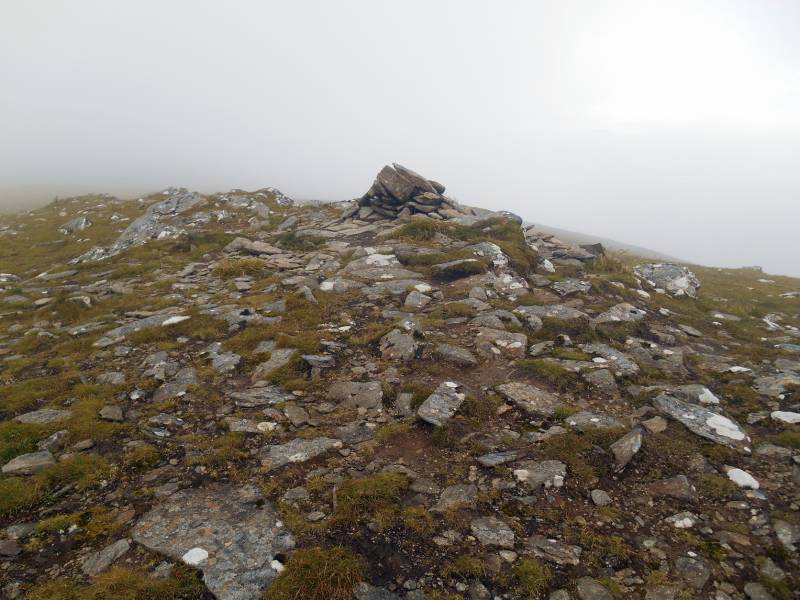 Small cairn marking summit of Moruisg at NH 1012 4993, 928m.
After visiting the summit cairn the route continues south west, then south, then south west again, around Coire Toll nam Bian to a col above Coire an Tuill Bháin, then on to the summit area of Sgúrr nan Ceannaichean. 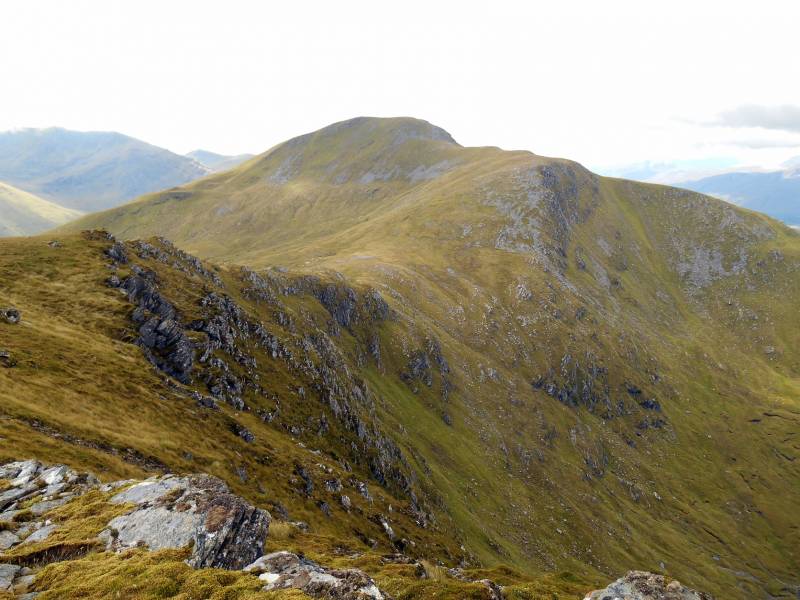 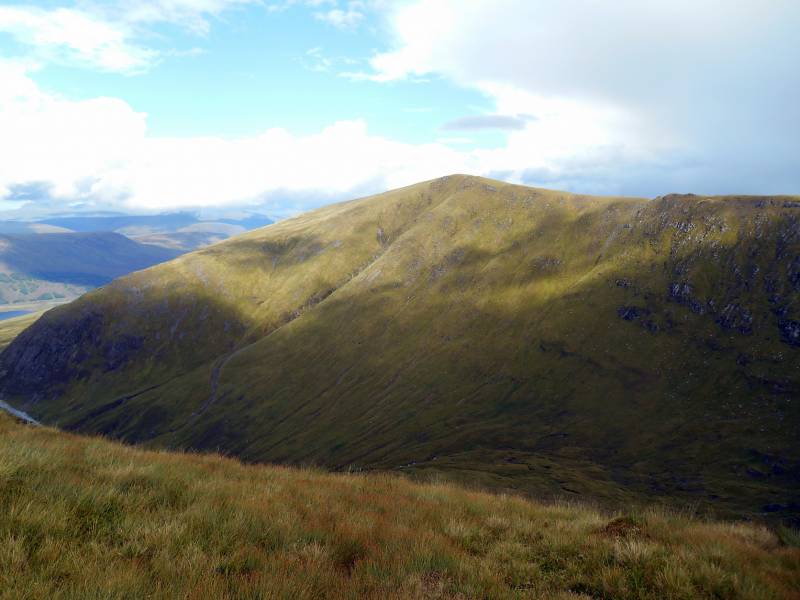 Moruisg viewed while descending ​Sgúrr nan Ceannaichean
After visiting the summit cairns, the ascent route is retraced for about 500 metres before a descent along the north ridge to the Alltan na Feóla which is crossed. The path then follows the Alltan na Feóla through the fenced off conservation area. After leaving the conservation area, the path back to the railway underpass is very wet and boggy in places, especially where All Terrain Vehicles have churned up the path.

The surveyors should have lied about the height of Sgúrr nan Ceannaichean and left it as a Munro! It's WAY better than Moruisg.

NOTE: ALL information such as Ascent, Length and Creator time taken etc should be regarded as approximate. The creator's comments are opinions and may not be accurate or still correct.
Your time to complete will depend on your speed plus break time and your mode of transport. For walkers: Naismith's rule, an approximate though often inaccurate estimate, suggests a time of 4h 7m + time stopped for breaks
NOTE: It is up to you to ensure that your route is appropriate for you and your party to follow bearing in mind all factors such as safety, weather conditions, experience and access permission.