Collaborative entry Last edit by: markmjcampion a day ago
Lyracappul is a grassy steep-sided mt at the W end of the well-defined Galtees’ ridge. The regular routes present no danger although it’s a steep pull-up from the W. Navigational help is prov...

jackill a day ago
Pat crossing a snow drift on the top of Lyracappul in March 2004- started at woods carpark R819 185 on to Temple Hill (where we met the Bishopstown Hillwalking Club- hello to all) then Lyraca...

Monabrack: A real sting in the tail.

Harry Goodman a day ago
Climbed Monabrack on 10 10 10 as the fifth and final top of a circuit that also included Temple Hill, Knockaterrif Beg, Lyracappul and Carrignabinnia (For previous part of the route see my co...

Summit Comment Declan Foley a day ago
Climbed it on Saturday, May 8, 2004, a beautiful sunny day with little or no wind. Started from the end of the boreen (turn left off the main Cork - Dublin road just after Kilbeheny - look ou...

jackill a day ago
Going up the col towards Carrignabinnia looking back at Monabrack (Lyracappul SE Top).Taken as part of a horse shoe starting at Grid Ref: R 862 208, up the track to the Mobile home - then fol...

Lugnaquilla: A bulky mountain with many routes and long range views but hazards

Collaborative entry Last edit by: markmjcampion 2 days ago
Lug as it is popularly known is Ireland's highest summit outside Kerry. The large summit cairn and trig pillar sit on a fairly flat dryish top with views better distant than near (mainly of t...

Fergalh 3 days ago
Park on road at top of hill on small layby 767612. Cross gate and follow the wall in a westerly direction to the field end. The cairn on top of hill is visible most of the way. Cross fence an...

Collaborative entry Last edit by: markmjcampion 3 days ago
Carrauntoohil when tackled by the recommended routes on a fine day is not the hardest or most dangerous hike. However, in bad weather it’s not always easy to find the routes as they are unmar...

Collaborative entry Last edit by: markmjcampion 3 days ago
Brandon Peak is a spectacularly placed peak along the Brandon ridge. It’s surrounded by v steep ground on a 180 degree Eastern sweep so take care in bad weather. Grand views of nearby hills f...

markwallace 4 days ago
Local Link includes a handy service from the car park at Padmore & Barnes in Kilkenny city to the village of Bennettsbri walk, Len: 10.5km, Climb: 97m, Area: South East Midlands (Ireland) ||
Most Recent Monthly Newsletter.
Conditions and Info
Use of MountainViews is governed by conditions and a privacy policy.
Read general information about the site.
Opinions in material here are not necessarily endorsed by MountainViews.
Hillwalking is a risk sport. Information in comments, walks, shared GPS tracks or about starting places may not be accurate for example as regards safety or access permission. You are responsible for your safety and your permission to walk.
See the credits and list definitions.

Had the sole aim of bagging Ireland's most remote Arderin Beg. Started at the Letterkeen Trailhead and set out north along the Bangor Trail. Although the condition of the trail comes in for a lot of criticism, I found that the first 7-8km were in a fairly decent state. 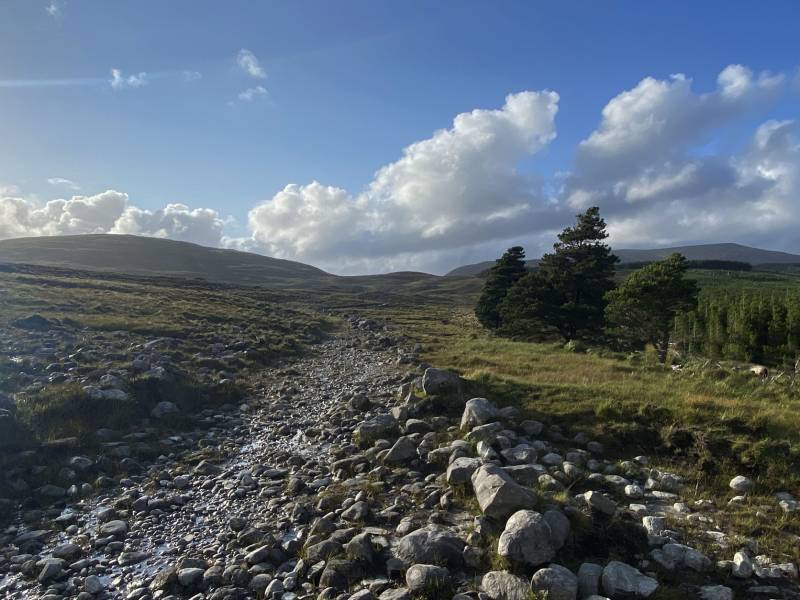 The views as you progress along the trail are varied and beautiful, sometimes offering vast panoramas. The route was straightforward enough, simply following the trail most of the way, which meanders through wide valleys and rises and falls repeatedly, although any initial climbs should not tax your legs too much. After about 9km, I could see the mountain directly ahead, and also that the trail was about to descend to curve around the base of the mountain at an elevation of around 140m. (I would also discover on the return journey that the next section of the trail is in a terrible condition, very boggy, and actually disappears a number of times). So I turned NE and began to climb the western side of Nephin Beg, which would offer a more gradual ascent that directly up the southern or western sides of Tawnyanruddia. 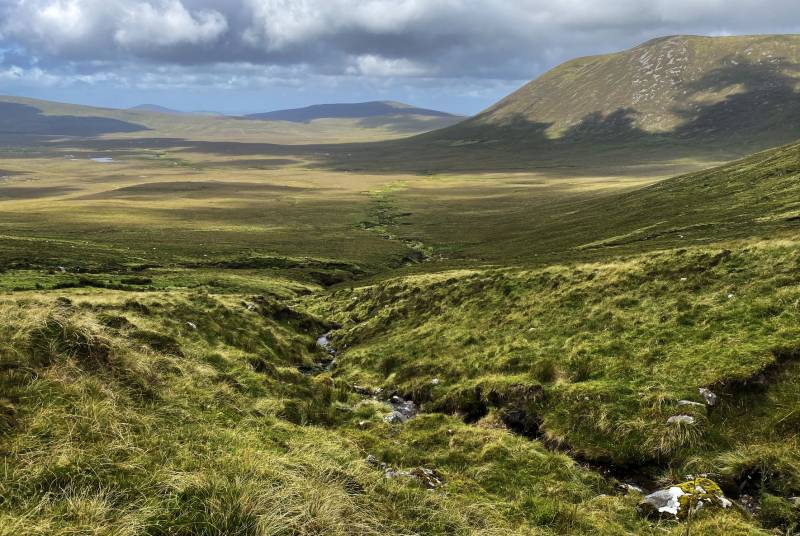 This route brought me to the base of the unlisted hill Corslieve and a height of about 380m. The next section was steep but doable, despite a wind that made it difficult to stand at times, and took me to the minor col between Corslieve and my destination. The views of the vast blanket bog to the west dotted with small loughs were tremendous. 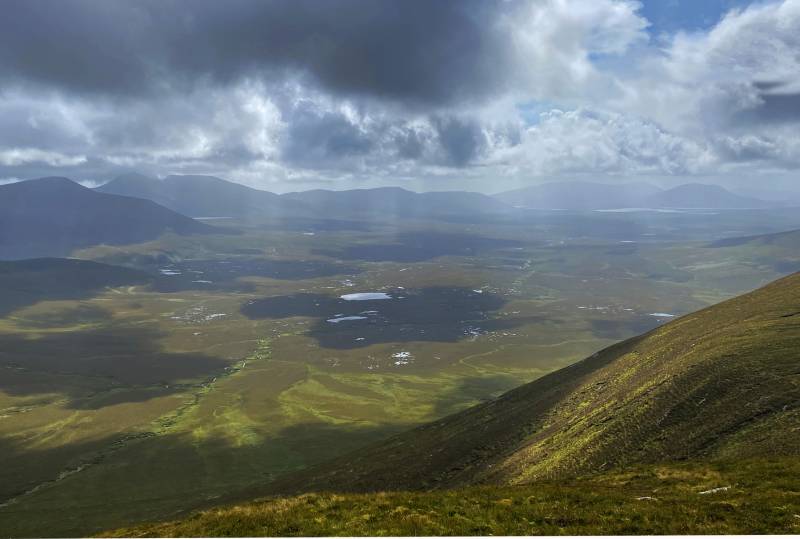 From there it was a simple 750m walk up a gentle slope, and through a few peat hags, to the summit, which is marked by a natural, pointed rock outcrop near its western end. I descended the steep slope in a SE direction, picked up the Bangor Trail again, and sloshed my way along initially until I reached the point where I'd originally left it. Then it was a long 9km walk back. My app informed me that I had walked almost 26km, which took me about 9 hours. Tough but very rewarding. 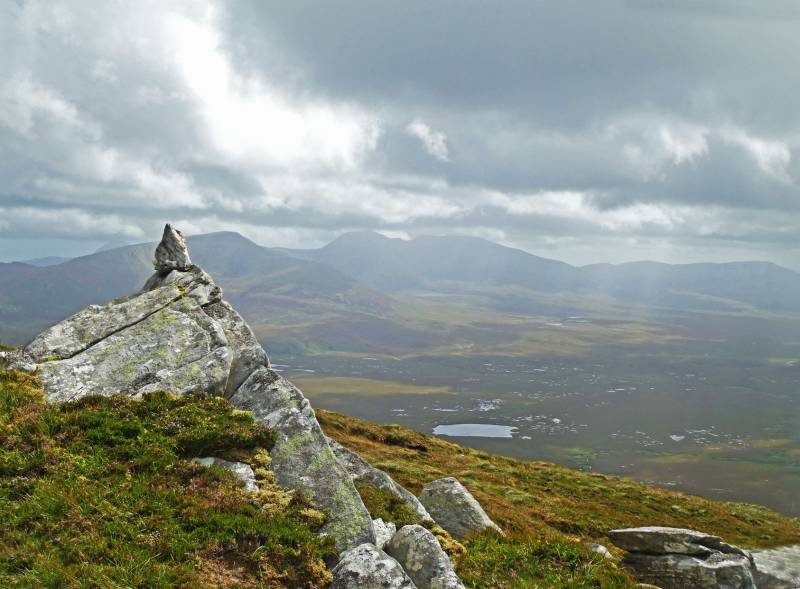 NOTE: ALL information such as Ascent, Length and Creator time taken etc should be regarded as approximate. The creator's comments are opinions and may not be accurate or still correct.
Your time to complete will depend on your speed plus break time and your mode of transport. For walkers: Naismith's rule, an approximate though often inaccurate estimate, suggests a time of 6h 31m + time stopped for breaks
NOTE: It is up to you to ensure that your route is appropriate for you and your party to follow bearing in mind all factors such as safety, weather conditions, experience and access permission.