Collaborative entry Last edit by: simon3 5 days ago
The Slieveragh route, SE. Start from along the road from the car park for 2.5k to S985895. Follow the southern edge of the forest up W over Slievereagh (531m) and then SW for some 300m before...

Gearhane: The west side of Derrymore Glen

Bunsen7 6 days ago
Just a picture of Gearhane from Caherconree to the south. My next visit here will use Derrymore Glen for approach and return, looping up to Gearhane after reaching the lake, round to Baurtreg...

Knockmore: Will you meet me on Clare Island.

TommyV a week ago
Of all the islands in Ireland that you need a boat to actually get to, Clare Island boasts the highest point in Knockmnore. We decided to do a loop of the island heading West along the main r...

Bunsen7 a week ago
It would be great if access to the north of Beenbo could be agreed as a lovely loop walk taking in Glennahoo (Gleann na hUamha -valley of the cave) and back down to An Baile Dubh would be pos...

Carolyn105 3 days ago
Parked up a lane marked in picture. Owner of house at the end of the lane was happy to let us park. Said her neighbour wasn't. Easy enough to the top

Damian120 a week ago
Myself and my hiking partner Martin King finally got the perfect weather to hike Sliabh Liag and it's certainly a truly great hike along the ridge. Going back as far as the Trig Point present...

Fergalh a week ago
Drove on narrow road to North East of this hill and parked near gate. Crossed this gate and through two fields to summit beside fence. The communications mast is a little lower to the west. E...

Fergalh a week ago
Short walk along pier past Marina leads to the rock that St. Brendan left from for his voyage to America way back when. A small free theme park is set around this rock and unusually for Kerry...

Collaborative entry Last edit by: simon3 2 weeks ago
This is a view of the island from Ballycotton Island. The island is to the right of the picture in the middleground.
Most Recent Monthly Newsletter.
Conditions and Info
Use of MountainViews is governed by conditions and a privacy policy.
Read general information about the site.
Opinions in material here are not necessarily endorsed by MountainViews.
Hillwalking is a risk sport. Information in comments, walks, shared GPS tracks or about starting places may not be accurate for example as regards safety or access permission. You are responsible for your safety and your permission to walk.
See the credits and list definitions.

Given the rugged nature of Gran Canaria's mountains, Montana de Tauro is a relatively easy ascent, yet one that offers really spectacular views. 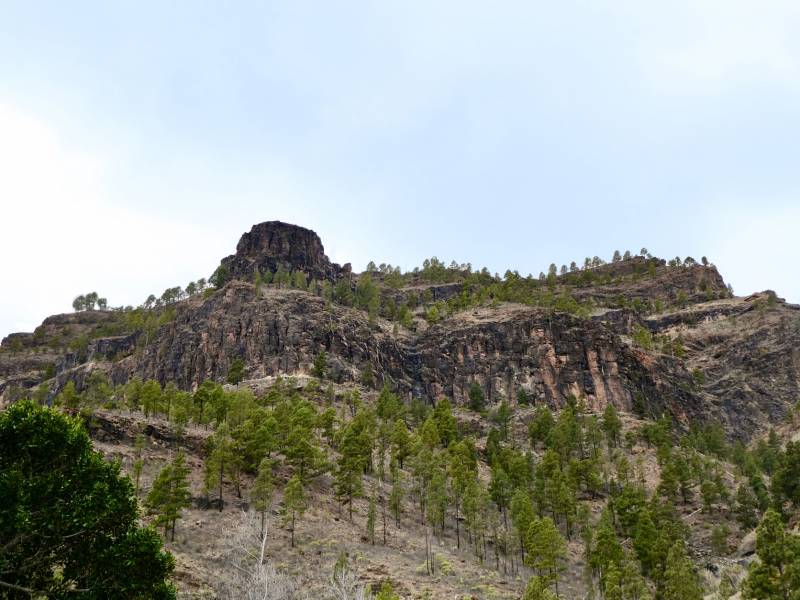 The mountain is essentially shaped like a pyramid with the top cut off.
A decent track meanders all the way from the road, where there is parking for about 8 cars at numerous points. The track is gentle at first, and disappears occasionally when it encounters boulders, and slowly increases in steepness as it ascends. 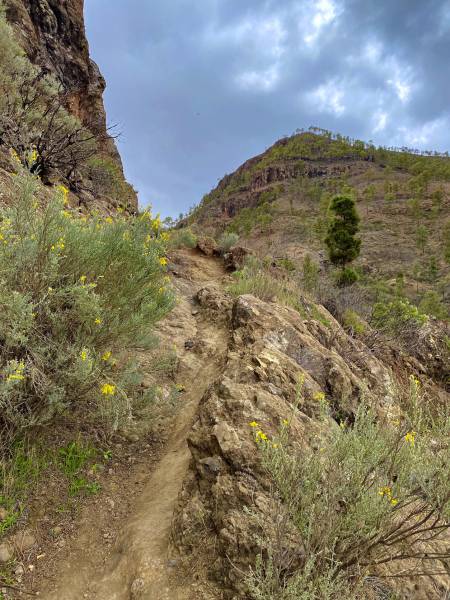 Views are limited in the lower portion of the trail, although there were abundant mountain wildflowers of all colours and sizes. The volcanic origins of the mountain are much in evidence, with multiple ancient lava flows visible. 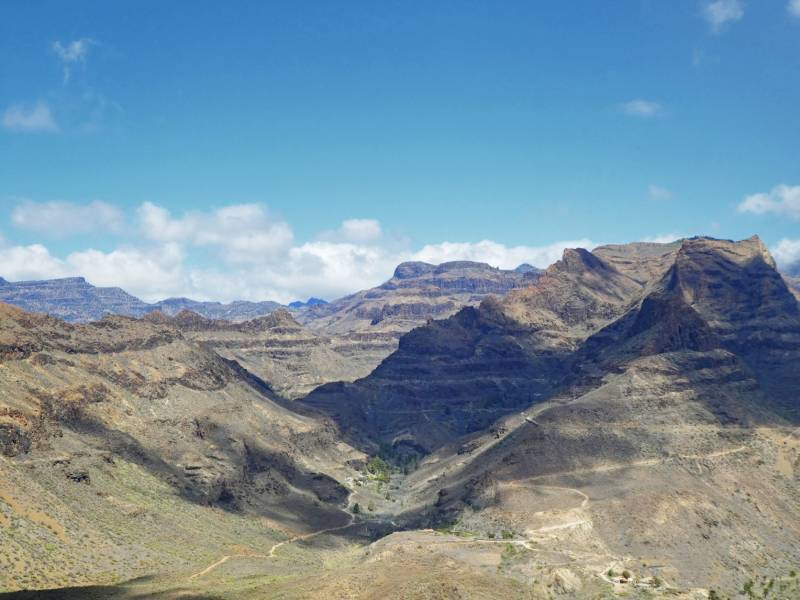 As you ascend the tree cover becomes somewhat thinner allowing for great views of the mostly arid landscape in all directions. The day I ascended it was alternately misty and then within minutes the skies would clear only for the mist to descend again ten minutes later. 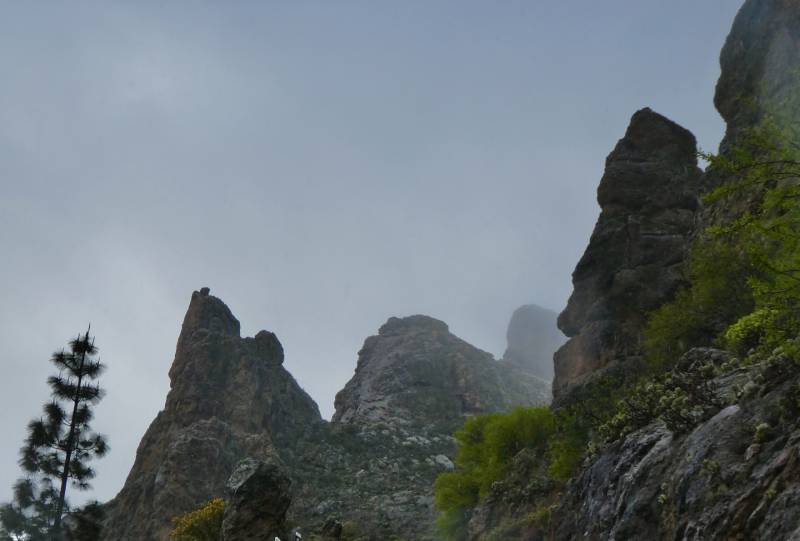 The mountain is an ancient ceremonial centre of the aboriginal people of Gran Canaria, with the presence of funerary caves, turrets and burial mounds found there, as well as a dry stone structure on the top known as the 'Church of the Canaries'. 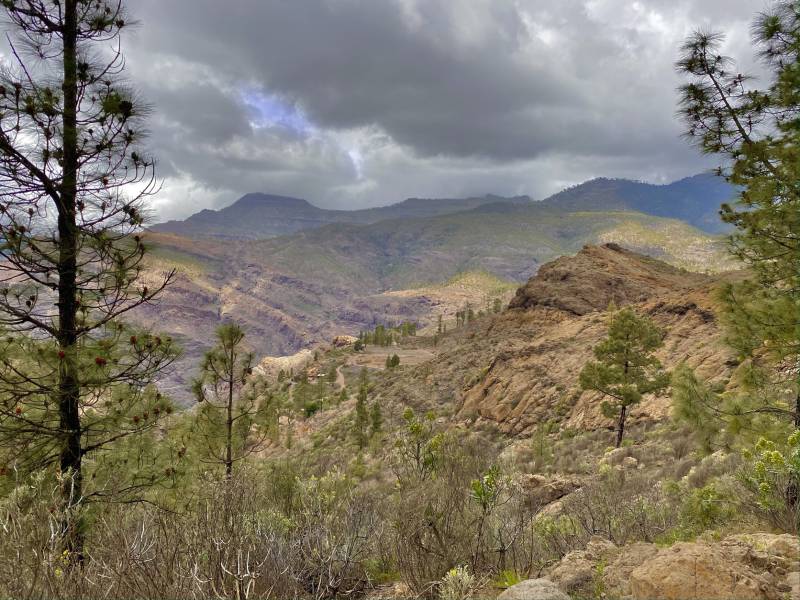 The summit is a relatively flat oval-shaped plateau about 200m long and 100m wide. The structure at the top does not actually sit on the high point, which I measured as 100m to the south. A sign on the trail suggested that Tauro is 1145m high, however the map and my GPS indicated it was over 1200m and I’ve found various other heights recorded, mostly around the 1190m. Up and down is a return journey of about 6-7km with about 350m ascent. A very rewarding climb, although I wouldn’t recommend it in the summer heat.

NOTE: ALL information such as Ascent, Length and Creator time taken etc should be regarded as approximate. The creator's comments are opinions and may not be accurate or still correct.
Your time to complete will depend on your speed plus break time and your mode of transport. For walkers: Naismith's rule, an approximate though often inaccurate estimate, suggests a time of 1h 37m + time stopped for breaks
NOTE: It is up to you to ensure that your route is appropriate for you and your party to follow bearing in mind all factors such as safety, weather conditions, experience and access permission.