paddyhillsbagger 16 hours ago
One of the joys of scaling Abbey Hill is the abundance of flora & fauna on it's slopes.Climbing It for the 3rd time with my brother & his daughters with their young & keen eyes uncovered an u...

Collaborative entry Last edit by: simon3 2 days ago
Binn Mhairg or ‘Peak of Woe’ has a slightly off-line location. Situated as it is at the end of a ridge extending 500 metres north from Binn Chaonaigh, it is just that bit too isolated to attr...

InTheFade 3 days ago
A nice hike up Gleann na gCapall up to Lough Erhogh ascending up the back to saddle between Mangerton and Mangerton Nort walk, Len: 11.6km, Climb: 733m, Area: Mangerton (Ireland) ||

Visit our Facebook page.
Video display
markwallace: Track 4637 in area near Dartry Mountains (Ireland)
Up to Eagle’s Rock, but no summits

I'm surprised no walk to this notable landmark has appeared on this site yet, so here's one. It doesn't visit any summit, just the gap between Eagle's Rock and the cliffs to its west, an impressive place of rock pillars and boulder fields.

Off the Manorhamilton-Bundoran road (R280) Eagle's Rock is signposted and up a lane there is a small car park from which there is an information board and a good view of the rock (there is some dispute over whether this name is correctly applied to this feature but as it's well known as that by now I'll go with it). Despite being such an unusual feature, Eagle's Rock is basically invisible from the main road as it blends into the cliff face behind. Just past the car park you cross a big stile onto a track that is clearly still in use as a farm track. The farmer passed by in a quad bike as I was walking up the track. Follow the track straight up towards the back of the glen, though Eagle's Rock is to the left. This is to outflank the various fences to the left side.

Walking towards the back of the glen, with Eagle's Rock just visible left of centre: 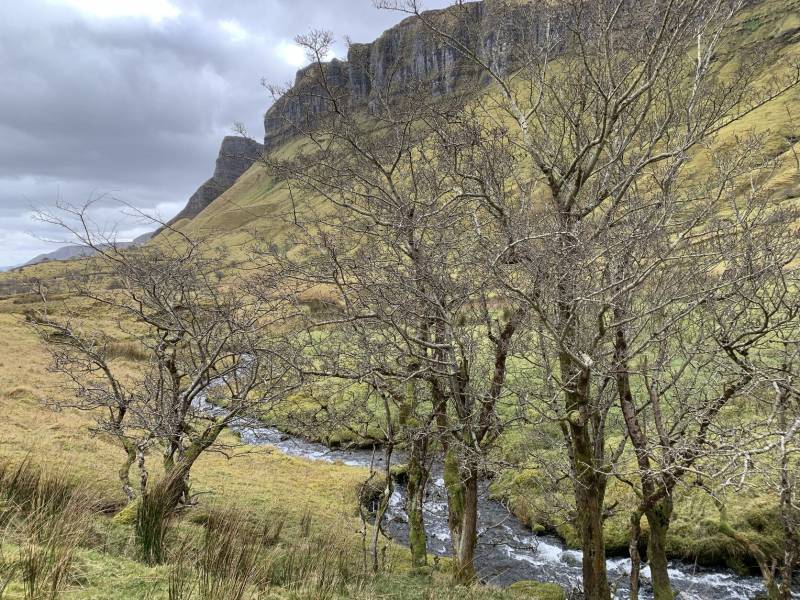 Once over the stream and through the gate head left. There is a muddy track in evidence towards the rock, which is hidden for most of the walk behind the nearer slopes. I gained some ground but it is probably easiest to keep handrailing the fence right up to where it veers left at the base of the rock. The constant small zig-zags on my route are due to the difficult ground, lots of in and out of stream beds and searching for the easiest ways over the steep, wet, grassy hillside.
Finally, I contoured round to a full view of the rock and the final ascent: 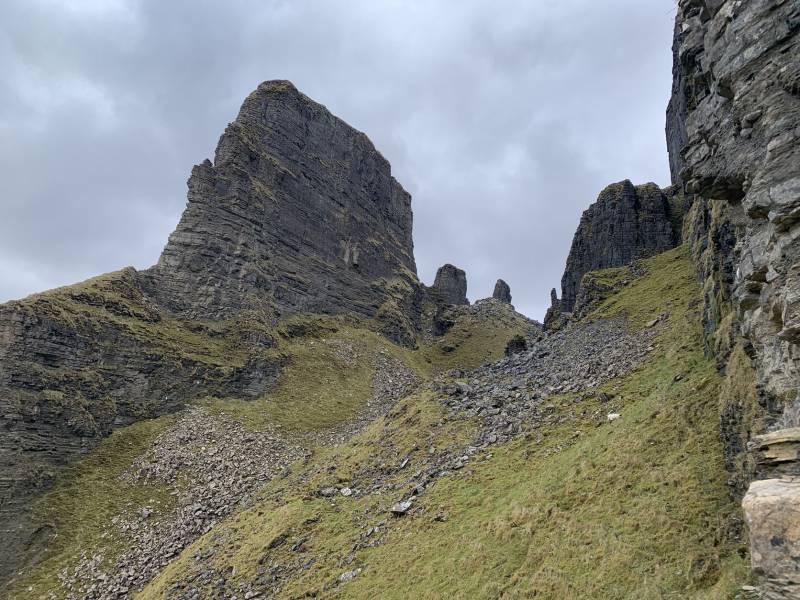 I scrambled about a bit at the top of the gap. The ground is all outcrops and broken rocks with several rock pillars to look around at, as well as views across Tievebaun to Donegal Bay and south Donegal, as in the photo below.

For the return I just retraced my steps. I slipped once so ended up with muddy trousers but given the ground that was to be expected. I accidentally kicked a rock down as well, and the echoes resounded through the cliffs as it rolled down through the boulder fields. It is a very short, albeit tricky, walk with a little bit of scrambling, to a unique place. There may be ways to extend it but I believe there are access issues with the ground to the south of the gap.

The summit of Eagle's Rock itself can only be reached by rock climbing. It has only been climbed by 6 people, in two groups in 1971 and 2012, according to uniqueascent.ie. That website also says the col has a Mordor-like feel with its rock towers and boulders, which is about right. 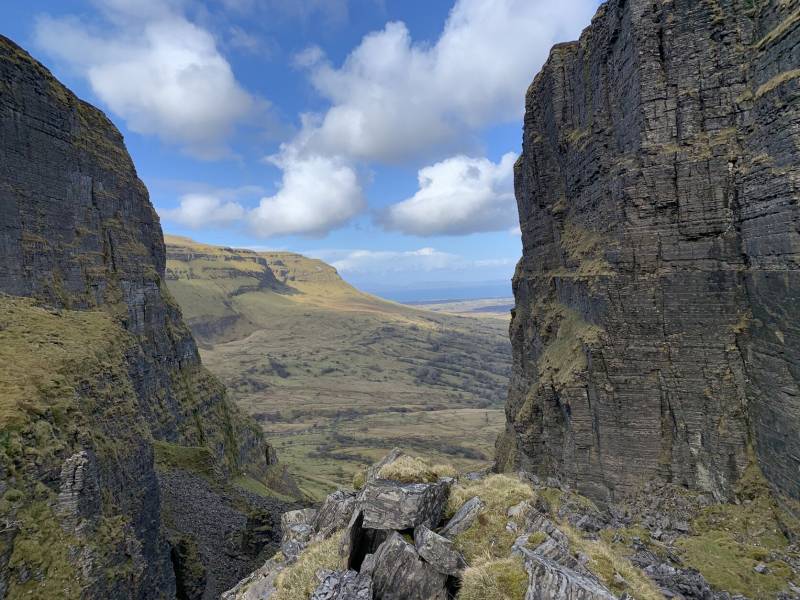 NOTE: ALL information such as Ascent, Length and Creator time taken etc should be regarded as approximate. The creator's comments are opinions and may not be accurate or still correct.
Your time to complete will depend on your speed plus break time and your mode of transport. For walkers: Naismith's rule, an approximate though often inaccurate estimate, suggests a time of 1h 51m + time stopped for breaks
NOTE: It is up to you to ensure that your route is appropriate for you and your party to follow bearing in mind all factors such as safety, weather conditions, experience and access permission.