paddyhillsbagger a day ago
One of the joys of scaling Abbey Hill is the abundance of flora & fauna on it's slopes.Climbing It for the 3rd time with my brother & his daughters with their young & keen eyes uncovered an u...

Collaborative entry Last edit by: simon3 2 days ago
Binn Mhairg or ‘Peak of Woe’ has a slightly off-line location. Situated as it is at the end of a ridge extending 500 metres north from Binn Chaonaigh, it is just that bit too isolated to attr...

InTheFade 3 days ago
A nice hike up Gleann na gCapall up to Lough Erhogh ascending up the back to saddle between Mangerton and Mangerton Nort walk, Len: 11.6km, Climb: 733m, Area: Mangerton (Ireland) ||

I did this track in reverse in 2013 but didn’t record it as I didn't have ViewRanger back then. I came across it in Paddy Dillon’s book on Tenerife (and La Gomera). Well, it’s actually two tracks in the book and my abiding memory was of El Batan. 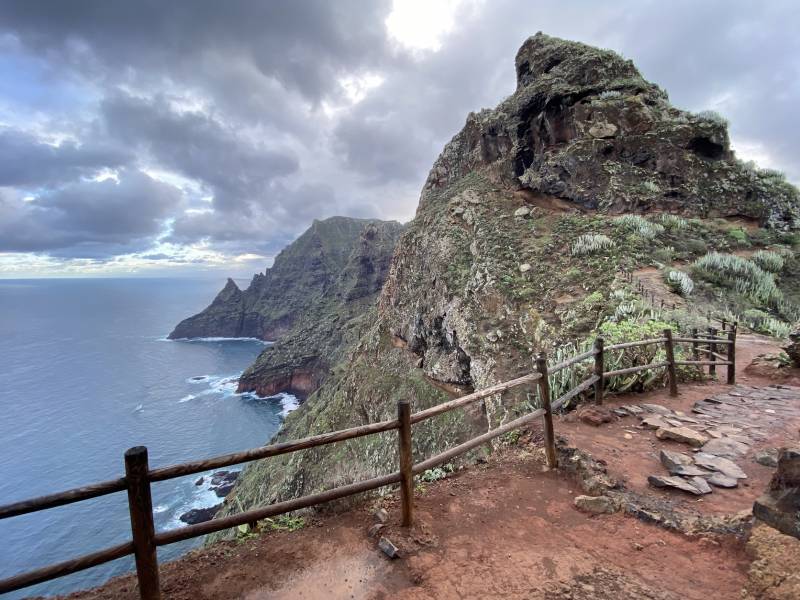 When you tire of laying on the beach down in the scorched earth South of the island or you’ve walked up around Teide National Park a good few times then the North is the place to go. It’s just so nice to finish a year walking around in shorts and t-shirt on made-for-walking tracks in a pair of trail runners. 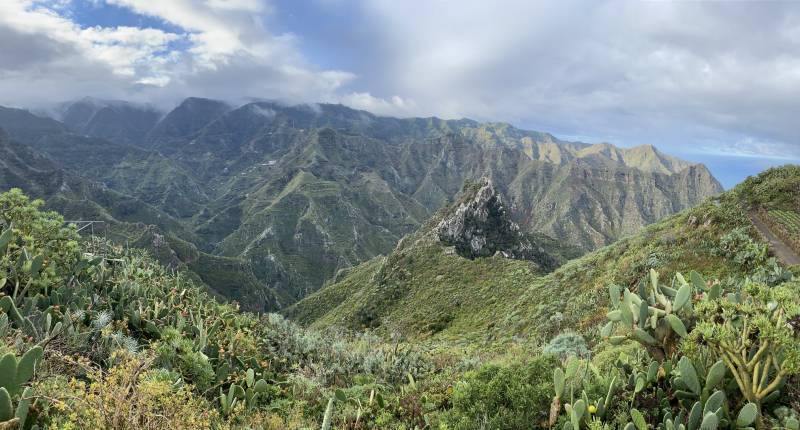 The bus service is so good that it’s very easy to commute to the start of the walks in the North. It’ll cost you about €16 for a return ticket to Santa Cruz from Los Cristianos and €1.45 each-way to get from Santa Cruz to Punta del Hidalgo. My first bus was at 05:50 and I was walking at 08:12. If you want to lie-in and wait for the midday heat on the climbs, you can do that too. 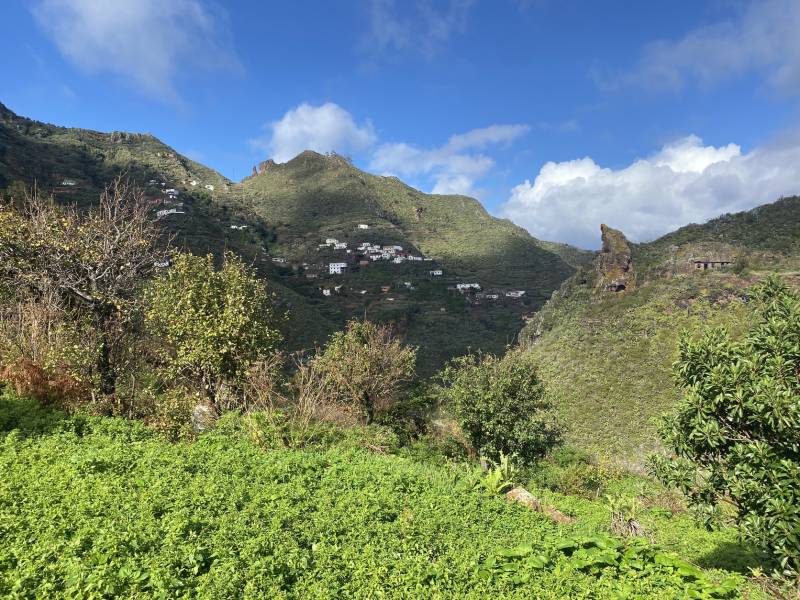 It's December so there’s sometimes a bit of rain up in the North. As I went higher there was mist but not enough to don a coat as it was about 15°C. Further up it sounded like there were heavy drops of rain but it was just the mist being grabbed by the foliage and the accumulated drops fell from leaf to leaf. 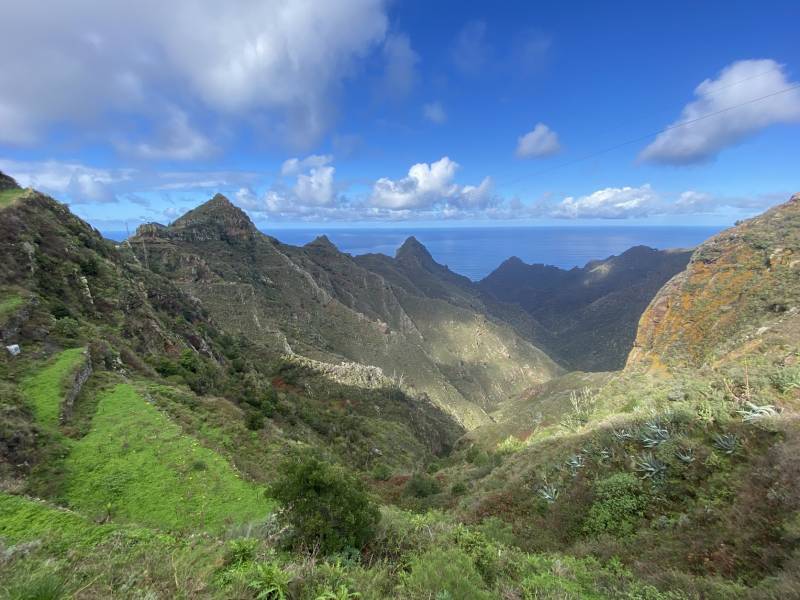 It’s folly to think that you won’t have cover from the sun for the duration of the walks up North as the trees (and barrancos) give plenty of shelter. At a guess, I’d say you’d be out of the sun 50% of the time.

The high point was Cruz del Carmen. There’s a viewing area. a restaurant, a cafe, a church and a museum up there. Basically, just full of people who drive up for the view. The walkers I met on my way up would have got a bus up to here and walked down to the Punta.

I made a mistake coming up out of El Batan. I remembered there being an electricity pole at the col that led out of the valley, so headed for it. But, there were two poles in two different cols. I just wasn't paying attention in the built up area where the church was and had the head down. So, you can disregard that 1KM of the track. 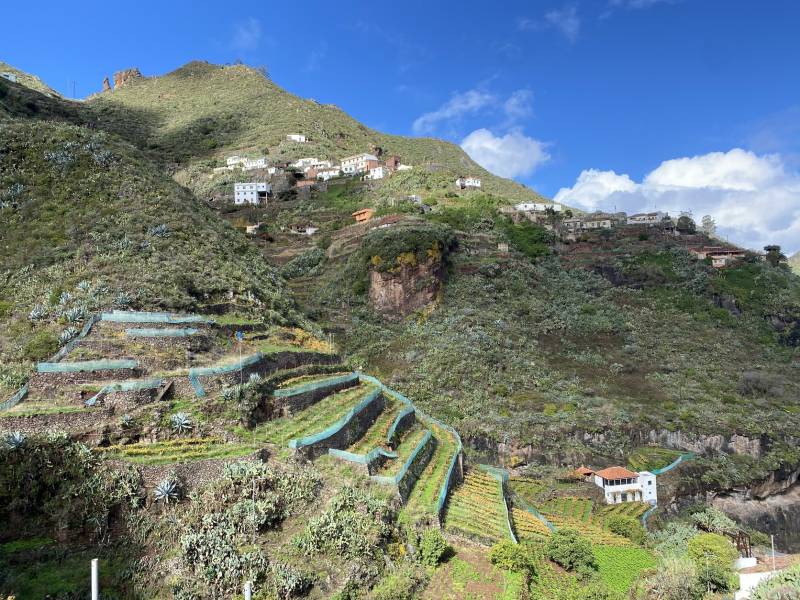 Again, El Batan was the highlight and it’s good for the body and mind to be able to sit there a while in December, in warmth, and pretend for a time that the outside World just doesn't exist.

NOTE: ALL information such as Ascent, Length and Creator time taken etc should be regarded as approximate. The creator's comments are opinions and may not be accurate or still correct.
Your time to complete will depend on your speed plus break time and your mode of transport. For walkers: Naismith's rule, an approximate though often inaccurate estimate, suggests a time of 6h 46m + time stopped for breaks
NOTE: It is up to you to ensure that your route is appropriate for you and your party to follow bearing in mind all factors such as safety, weather conditions, experience and access permission.