Slievebawn: Worth the short walk up, less steep turf and stone path.

gaoithe an hour ago
We did this on roasting hot day after going up and down Mt. Leinster by road. Nice walk up. Legs welcomed the stretch and walk on turf and rock after the steep tarmac road down the bigger mountain...

Lugnaquilla and Camenabologue SE top, with a tough descent

Track 4709 eamonoc 10 hours ago
With the decent weather of late, I decided after approx 20yrs to visit Glenmalure and take a trip to Lugnquilla via t... walk, Len: 17.7km, Climb: 1122m, Area: Lugnaquilla, Wicklow (Ireland) Lugnaqu

Knockboy: What a location (on a fine day!)

Summit Comment hazyview 10 hours ago
The most incredible views on the drive up to Priest's Leap. Still squelchy underfoot in parts despite glorious weather. Stick to the fence: we went astray at one stage when we left it.

simon3 a day ago
During a heat wave in 2022 this was the view of Mullaghcleevaun seen from the slopes of Kippure to the North East. Overall the colour is much lighter than usual. The purple is of the heather,...

An easy hike at the Wicklow Gap in County Wexford

Sorrel Hill: View from the north-east.

simon3 a day ago
This is a view of Sorrel from the north-east.

Tomaquinas a day ago
I had the pleasure of visiting this island on one of the nicest days of the year. There were some magnificent views of Croagh Patrick, the Sheefry mountains, Mweelrea and the Bens from our fe...

Forum: General simon3 2 days ago
So far as I am aware there are no objections to some smaller groups occasionally visiting the place provided they behave responsibly. There were objections to routes being published in a book...

Mweelin: Great views on the way up to and at the top

Carrigalougha: There are bigger and better fish to fry nearby

Summit Comment Pepe 3 days ago
Parked at W142 717 and plodded through the boggy terrain. A short but uncomfortable trudge up and down: reeds, tall grass, rocks, dodgy footing, midges, fences, etc, etc. Up top the views are...

Carolyn105 a week ago
Parked up a lane marked in picture. Owner of house at the end of the lane was happy to let us park. Said her neighbour wasn't. Easy enough to the top
Most Recent Monthly Newsletter.
Conditions and Info
Use of MountainViews is governed by conditions and a privacy policy.
Read general information about the site.
Opinions in material here are not necessarily endorsed by MountainViews.
Hillwalking is a risk sport. Information in comments, walks, shared GPS tracks or about starting places may not be accurate for example as regards safety or access permission. You are responsible for your safety and your permission to walk.
See the credits and list definitions.

The last day of the July 2021 heatwave and with temperatures expected to be in the mid 20s, I decided on a relatively early start. I hadn't planned to complete the loop as I wasn't sure if I would be able to ascend Muckanaght from the North. Also, the heat and horseflies were having a severe impact on the mood of the party!
I spent some time on the summit of Benbrack looking for a route up the very steep, grassy north face of Muckanaght and saw a series of ramps, a broad one low down with a short traverse out right to a narrower one that led upwards, close to the summit. I was able to use another ramp, sloping up and left to gain the summit. This way of climbing Muckanaght is not recommended in wet conditions! 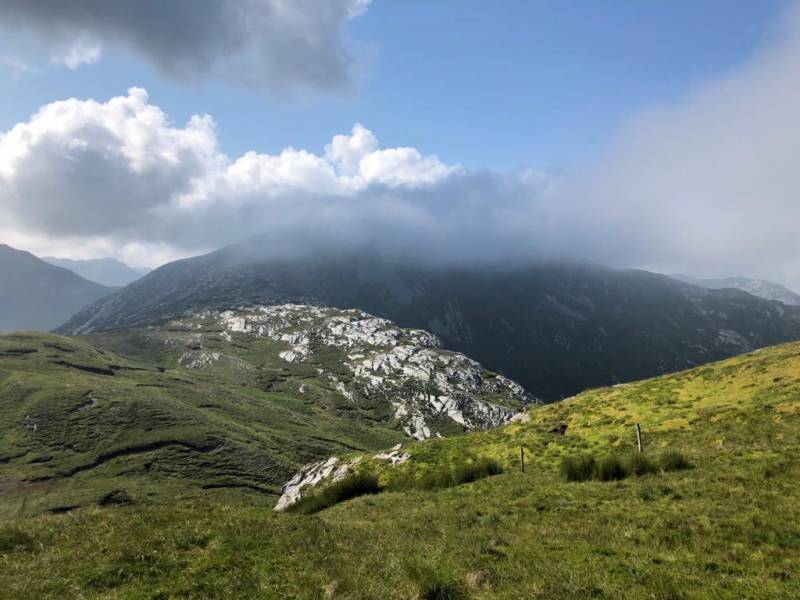 Low cloud passing over the summit of Benbrack, from Benbaun.
After a long rest and refuel, I continued on to Benbaun. On the descent, I opted to continue along the ridge to Knockpasheemore, partly to enjoy the views and partly to avoid the dead heat of the valley floor.
Overall, a really great day out in the Bens. Highly recommended. 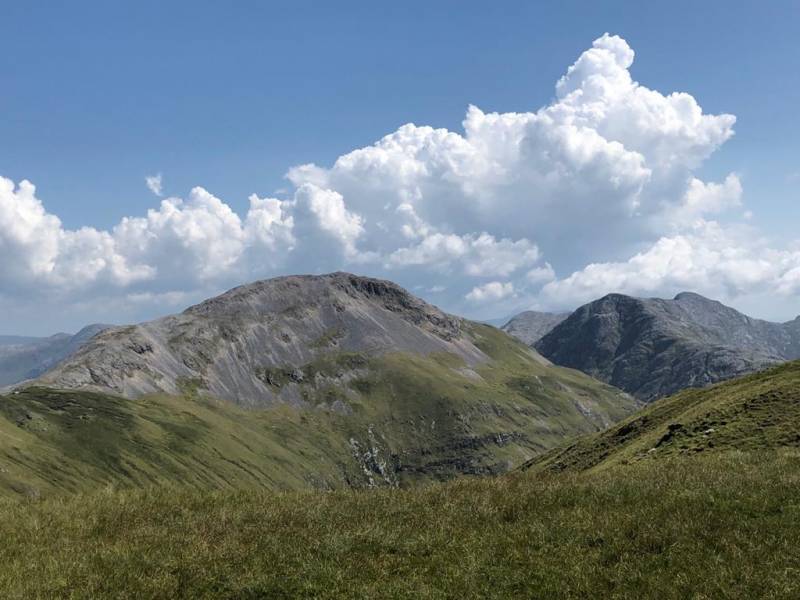 NOTE: ALL information such as Ascent, Length and Creator time taken etc should be regarded as approximate. The creator's comments are opinions and may not be accurate or still correct.
Your time to complete will depend on your speed plus break time and your mode of transport. For walkers: Naismith's rule, an approximate though often inaccurate estimate, suggests a time of 5h 15m + time stopped for breaks
NOTE: It is up to you to ensure that your route is appropriate for you and your party to follow bearing in mind all factors such as safety, weather conditions, experience and access permission.