billbaggins 22 hours ago
A’Mhaighdean and Ruadh Stac Mór are two of the more remote Munros. Their summits provide some of the best views in Sc... walk, Len: 39.5km, Climb: 1748m, Area: Loch Maree to Loch Broom (Britain) A\'||

Fergalh a day ago
Parked at 932273 and strolled over bridge to island. Turned right and at 931273 walked up a green lane past a orange house until i reached a T junction. Here i turned right and than crossed w...

Fergalh a day ago
Parked at 657638 Underneath Rinvyle Castle beside the beach. Followed track through two gates until 650641 than turn North west to the point. From here if the tide is out it is a short walk t...

Cloghercor South: Worth a visit if passing

eamonoc 2 days ago
Direct route up and down from R250, plenty of parking atG86210 99124, cross road to farm gate and onto open hillside for boggy trek to summit

Glengesh Hill: A boogy round trip

eamonoc 2 days ago
Done as part of a round trip from Glengesh gap, over Croaghavehy.

Summit Comment moggy40 6 days ago
The gate at point B now has a lock on it, so driving is out. Bike or walk is still an option

Colin Murphy a week ago
It's amazing sometimes how winter can transform an otherwise ordinary little hill into something beautiful. Slieve Rushen is a tramp through heather to a broad mound with a slightly smaller m...

Track 4793 eamonoc 3 days ago
Started this walk from Carpark at Glengesh Gap, from the start the ground was very wet and boggy and continued so ov... walk, Len: 9.0km, Climb: 463m, Area: Cruach an Bheithe, Donegal SW (Ireland) ||

Collaborative entry Last edit by: Colin Murphy a week ago
It is possible to drive up a narrow forest road to H23164 21626, (Corneen Wind Farm) where there is parking for a few cars. This will take you to about 350m ascent, however after that, depend...

Fergalh a week ago
We approached this island at low tide on a windy day hoping that the channel was narrow enough to cross. However it is around 2/3 metres across with the Atlantic swell rushing through and wit...
Most Recent Monthly Newsletter.
Conditions and Info
Use of MountainViews is governed by conditions and a privacy policy.
Read general information about the site.
Opinions in material here are not necessarily endorsed by MountainViews.
Hillwalking is a risk sport. Information in comments, walks, shared GPS tracks or about starting places may not be accurate for example as regards safety or access permission. You are responsible for your safety and your permission to walk.
See the credits and list definitions.

This is the classic middle section of the Brandon ridge, up from the coastal village of Cloghane (plenty of parking at the church) past the grotto at Faha, through the spectacular corries and paternoster lakes, over Brandon to Brandon Peak and Gearhane, then descent and a long road walk back to Cloghane. It is almost the same route as Colin Callanan's 4335, but this is the one-car version, which adds - a lot - to the length. I also included the short detour of a few minutes to Faill na nDeamhan's minor summit. Faill na nDeamhan is an impressive pinnacle, but is flanked by even more impressive pinnacles, so is not essential.
Looking east over the Faha Ridge: 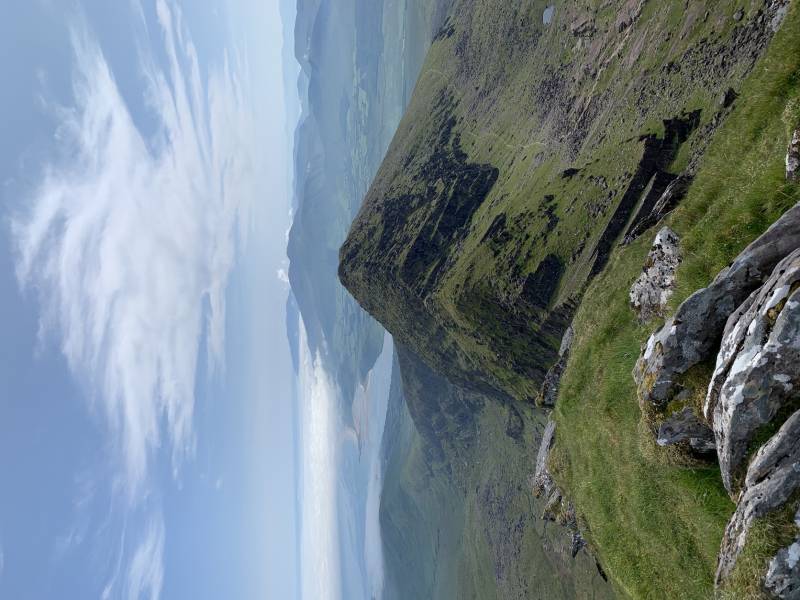 The top of the Faha path snaking up the back of the corrie, as seen from Brandon: 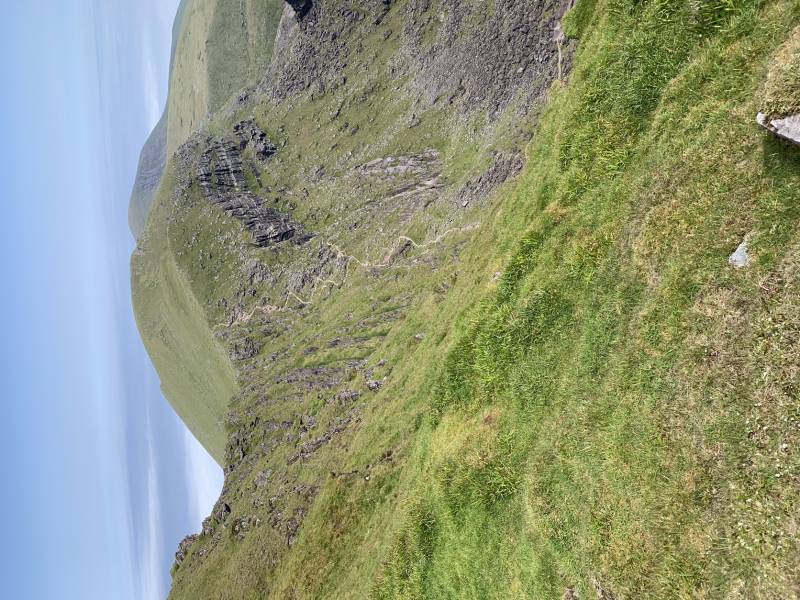 This was undertaken in the middle of a heatwave, which meant the sea-to-952m-summit ascent was gruelling, but the views were spectacular. The fact the ascent passed by some lakes near the top also became important, as extra drinking water was needed. The sun blazed overhead, but some of the surrounding valleys were filled with cloud. There were fewer people on the hills. Once I left the main summit and started towards Brandon Peak and Gearhane, there was not a soul around. The walking got easier, too, with the 190m to Brandon Peak the only substantial ascent. Brandon Peak is a stunning spot, its summit cairn perched over a massive precipice and with endless hill, coastal and island views.
Approaching Brandon Peak: 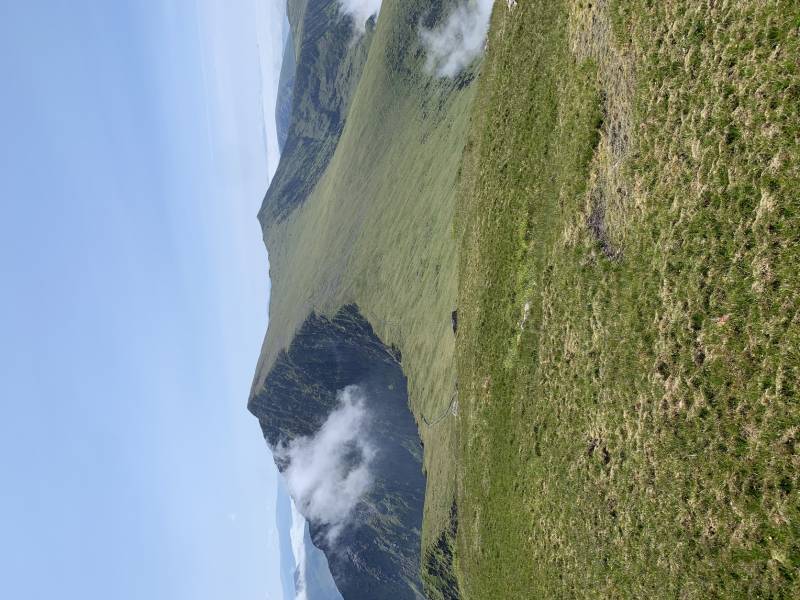 One thing I might change if I did this again would be to descend from Gearhane to shorten the walk out. Looking at the map while standing at Gearhane, I noticed a steep but apparently feasible descent by going down the (roughly) east ridge to Lough Avoonane. That was confirmed by the view from the road later. Instead of doing that, I was following the route in Lonely Planet Hiking Ireland and met a good track marked on OSI 70 to descend gently past Loch na mBan through Mullaghveal, getting more water from the Owenmore River around where the track becomes road. It is a simple route without the proximity to dangerous ground that Gearhane has so is the safest option. Still, the shorter walk out from Gearhane is tempting, at least in good visibility when the descent line should be clear. A mistake here, though, could be serious. As it was, I had 6.5 km of road to get back to Cloghane.
The two-car version version would omit that 6.5 plus the 2km at the start from Cloghane to the Faha car park (which is small and fills up early in summer) so instead of 21.7 km would be something like 13.7.
Cloud covering the lower ground to the west: 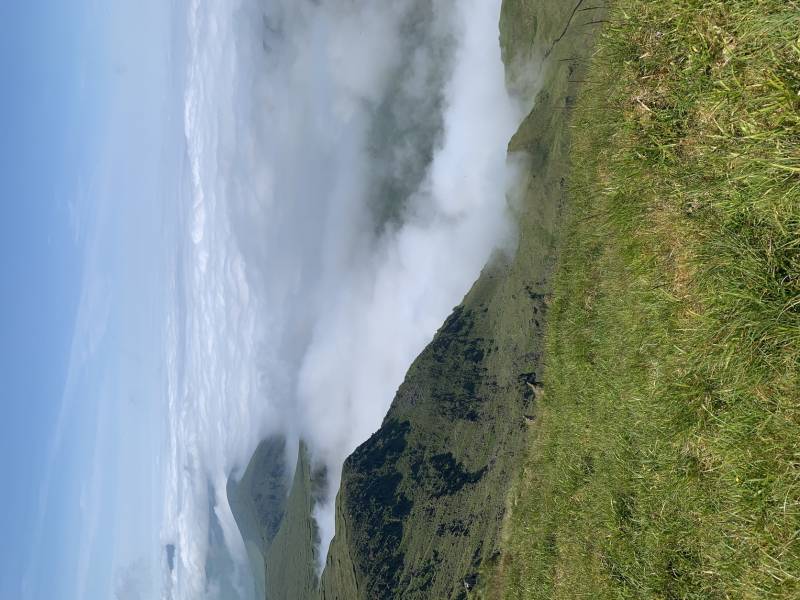 NOTE: ALL information such as Ascent, Length and Creator time taken etc should be regarded as approximate. The creator's comments are opinions and may not be accurate or still correct.
Your time to complete will depend on your speed plus break time and your mode of transport. For walkers: Naismith's rule, an approximate though often inaccurate estimate, suggests a time of 6h 22m + time stopped for breaks
NOTE: It is up to you to ensure that your route is appropriate for you and your party to follow bearing in mind all factors such as safety, weather conditions, experience and access permission.