Colin Murphy a day ago
I followed the quicker route in the short summary. Be warned that the track leading to S01331 71186 is in a terrible state thanks to forest vehicles churning it into a rutted quagmire (and th...

Colin Murphy a day ago
I could not identify the route directly up from the road as described in the short summary, as it seems to have become completely overgrown. Instead I crossed the gate on the left that led in...

Colin Murphy a day ago
Other contributors have remarked on the curious porcelain dog marking the summit, speculating that it might be a memorial to a beloved pet. Well, it's not. As my daughter & 1 descended we enc...

srr45 4 days ago
Look out tower. In surprisingly good condition given it’s exposed location. It is located about 500m directly south of Sturrall summit. Don’t miss this as it is worth a visit if doing Sturrall

Track 4690 simon3 5 days ago
This route starts from the Glenmalure Lodge and takes an approach up Carriglineen and then Kirikee that avoids ex... walk, Len: 15.7km, Climb: 680m, Area: Carriglineen Mountain, Wicklow (Ireland)|...

srr45 4 days ago
Another View

Summit Comment 500plusclub 5 days ago
Cold dry windy June day hike to lowbawn via sugar loaf. New fencing so make sure you are on the right side of it for going up. Both war dept stones still toppled. Might head up some day and t...

David-Guenot 5 days ago
French bank holidays in May and June often give an opportunity to explore new places. With a few hours for myself to spa walk, Len: 12.6km, Climb: 654m, Area: France, Occitanie () ||

Summit Comment 500plusclub 6 days ago
Hiked church mountain as part of a loop, continuing along corriebaks, pinnacle and back through Donard village. They seem to be installing new fencing and pedestrian gates

pdtempan 6 days ago
I climbed Bengorm on a clear, sunny day in May as a way of reaching the higher target of Corranabinnia. During the whole walk of 6.5 hours, my only human encounters were on the lower slopes o...
Most Recent Monthly Newsletter.
Conditions and Info
Use of MountainViews is governed by conditions and a privacy policy.
Read general information about the site.
Opinions in material here are not necessarily endorsed by MountainViews.
Hillwalking is a risk sport. Information in comments, walks or shared GPS tracks may not be accurate for example as regards safety or access permission. You are responsible for your safety and your permission to walk.
See the credits and list definitions.

Visit our Facebook page.
Video display
jgfitz: Track 4474 in area near Wicklow (Ireland)
Glen of the Downs route to Kilcoole.

From the trail head, follow Three Trout stream southwards through Glen o'the Downs wood. Exit the wood by descending the concrete steps onto Glen Road. Take the footpath alongside N11 initially in preference to R762 (for safety reasons), i.e. from the steps go the the roundabout on your right to access to footpath (There are two roundabouts and four roads at this point so a bit of careful road crossing is called for. Basically, cross over both the road on your right coming down from the N11 and then the road going under the N11 to reach the footpath on the right hand side of the R762 where you will see a footpath with a wooden fence leading up to your right. Take this path as it rises up to run alongside the N11.) Leave the N11 footpath and join R762 at the point where Blackberry Lane (L5402) emerges, and continue southwards. The road becomes a track, and this is the Drummin masspath. At O273 092 there is palisade fencing across the mass path, around a business premises. However, the gates are permanently unlocked, so walk through. (A subsequent check on the internet shows that the county council challenged this closure of the mass path in court in 2017, and seems to have succeeded). The route of the Drummin mass path is interrupted by the upgrade of R774 Farrankelly Road to a dual carriageway (I searched in vain for a tunnel under this road; then I saw the sign covered in overgrowth). It is necessary to head west for 350 m along the footpath to the nearest roundabout just to cross the road! Having rejoined the mass path on the other side of the road (where the signage is also hidden in overgrowth), there is a very short muddy patch, but from there is a good quality path through nice woodland and pastures to L5542 at Kilquade Hill. This point, O285 078, where the Cannistown River meets St. Patrick's River, is the convergence of the Drummin and Kilcoole mass paths, both going from there to St. Patrick's Church, Kilquade. From this road, rather than proceeding to Kilquade, we took the Kilcoole mass path to our destination at The Rock of Kilcoole, a rocky outcrop with splendid sea views. This is a very nice section of the trail, and the two photos below were taken on this section. 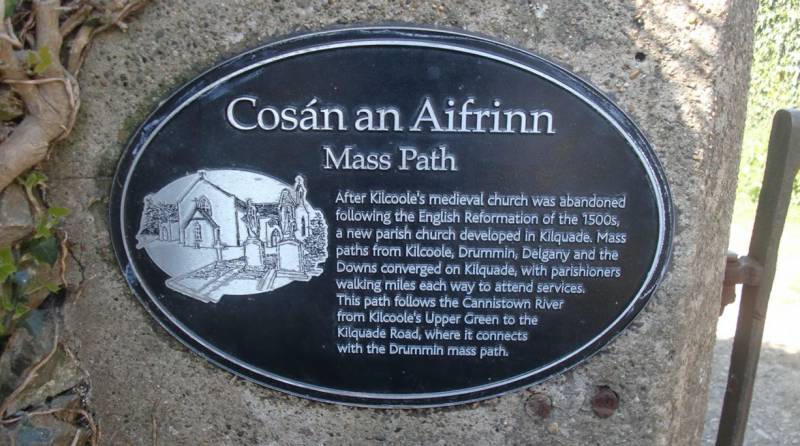 The alternative of following the joint Drummin-Kilcoole mass path from Kilquade Hill to St. Patrick's Church in Kilquade, which we didn't take on this occasion, is an opportunity to view this historic church, to have excellent coffee at the Arboretum, and to investigate the Old Russian Village. This enclave of about 20 houses in Dacha style was designed by Bayan Giltsoff in the 1940s as a tribute to his homeland. One of these houses, Hunter's Moon, is almost directly opposite the church, and best viewed from the Arboretum now that the high hedge has been cut down. There are also photos on the internet of this and other Russian-style houses.
Don't be put off by the apparent barriers that we encountered on this hike. This mass path is worth a visit, and is quite varied. The purpose of starting from Glen o' the Downs was to stretch it into a hike of a reasonable length. We'll be doing it again.

This is a really interesting looking walk researched no doubt as a result of lockdowns.

NOTE: ALL information such as Ascent, Length and Creator time taken etc should be regarded as approximate. The creator's comments are opinions and may not be accurate or still correct.
Your time to complete will depend on your speed plus break time and your mode of transport. For walkers: Naismith's rule, an approximate though often inaccurate estimate, suggests a time of 3h 10m + time stopped for breaks
NOTE: It is up to you to ensure that your route is appropriate for you and your party to follow bearing in mind all factors such as safety, weather conditions, experience and access permission.