hivisibility 4 days ago
Just to leave everyone know that the bridge over the river Crinnagh mentioned earlier by markmjcampion has been repaired. So anybody wanting to head to Cromaglan and beyond on the Kerry Way f...

Geo 4 days ago
A summit which probably won't feature in any poetry, but it has it's charms.You may struggle to name them after the trudge there and back from whichever direction you do it.

Geo 4 days ago
Third summit of my round of track no 3323.Nothing to report as the top is a "pays ya money, and takes ya choice" type of peat hag festooned lump that needs a GPS to find.Great fun on the west...

Forum: General simon3 3 days ago
MV is looking for a reviewer for a new book about JB Malone, written by Michael Fewer.please contact admin@mountainviews.ie if interested.

Geo 4 days ago
Continuing the route of track 3323 having already done the North East Top.This is another hill adorned like everywhere else on this part of the Ox mountains, with peat hags of all sizes and s...

Bibliography aidand 3 days ago
112 pages, with colour photographs and outline maps. The book describes 24 walks ranging from low level walks taking an hour or two up to 8 plus hour serious mountain treks.

Geo 4 days ago
When in the heritage town of Kells, take the R163 road for Oldcastle about 2km out from the town centre. A sign (easily missed) for the People's Park points the way to the right up the cul-de...

Knockalongy North-East Top: Not a footprint!

dino 6 days ago
I came here from Croaghan Hill. I hadn't planned to but it's the second closest hill to home and it was almost on my way home. Not being prepared I simply used Aidy's directions. I went furth...

dino 6 days ago
Having spent my Sunday off completing household chores I had a need to get out in the fresh air and Croaghan fitted the bill perfectly. It's a decent walk, less than an hour and close to home...
Most Recent Monthly Newsletter.
Conditions and Info
Use of MountainViews is governed by conditions and a privacy policy.
Read general information about the site.
Opinions in material here are not necessarily endorsed by MountainViews.
Hillwalking is a risk sport. Information in comments, walks or shared GPS tracks may not be accurate for example as regards safety or access permission. You are responsible for your safety and your permission to walk.
See the credits and list definitions.

I parked at the trailhead for the newish Lettershanbally Loop and followed that loop for the first 3.5 km. Mostly standard forest track walking but the last 1 km is a nice boardwalk through flat bog, surrounded by the Maamturks and Twelve Bens. At the end of the boardwalk, the Loop meets the Western Way. Instead of following the Loop south along the Way, I headed north on the Way for 500m then crossed the fence onto the hillside at a suitable point heading for some stone ruins under some bare (at least in early March) trees. Lazy beds were also visible on the hillside above the ruins. A fresh vehicle track was visible among the ruins, so out of curiosity I followed it down to a gate, which I would pass through on the descent. Then I returned to the seanbhaile, took a few photos and headed directly up the steep, mostly grassy hilside. It was a short climb to pt. 324. The grassy hilltop has no cairn or other marker but has great views in all directions. 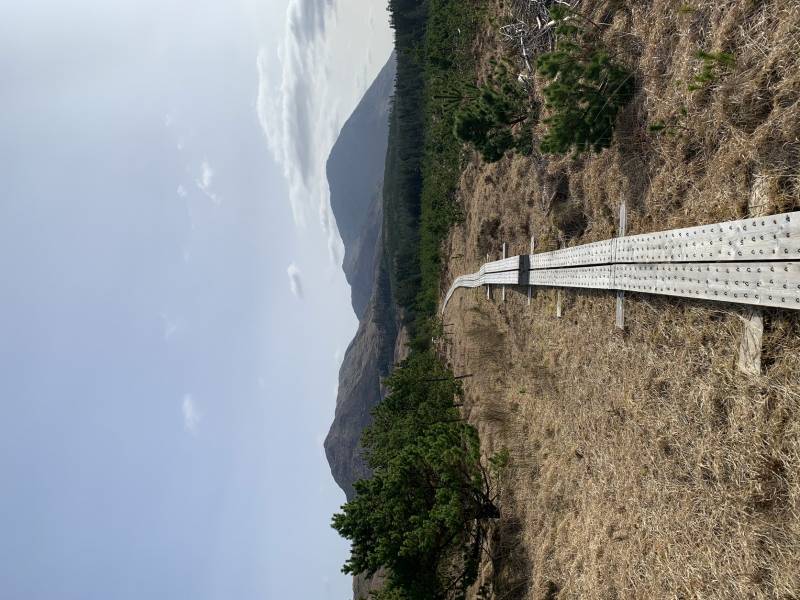 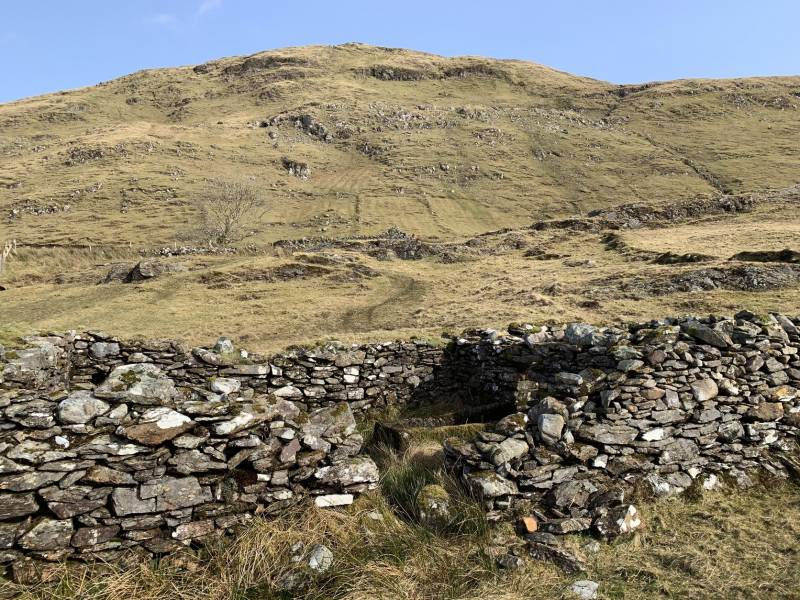 I headed down, taking a more northerly line as the descent was gentler in that direction. I passed close to the remains of a prehistoric fort on the lower slopes, but I didn´t cross the fence to visit it. I descended to the gate I had seen earlier. There was a lock on the gate but it was open. I followed the Western Way back to the intersection with the Lettershanbally Loop and headed back over the boardwalk. I reversed my steps rather than completing the Loop because the rest of the Loop after the boardwalk is on forestry tracks with trees blocking the view of the surroundings so it is not particularly rewarding.

I don´t know the name of this hill. I´m guessing Lettershanbally Hill. It doesn´t fit the height/prominence criteria to go in any MV list but both from the ground and from the top it feels and looks like a fairly independent summit. It has a prominence of 90m and height 324m. The slopes drop steeply away to north, west and east, and even to the southeast where the ridge leads to its parent peak, Maamturkmore/Binn Bhán, the ground drops away for over a kilometre before beginning to rise. Maamturkmore is almost 3 km away as the crow flies, so it doesn´t feel like it dominates this hill at all. The views from the summit are very good on a day as fine as the one I was up there. Views include the grassy bulk of Leenane Hill to the North, Twelve Bens, Lough Inagh, Kylemore Lough, the Benchoonas, Killary Harbour, Mweelrea, the Sheeffreys, Ben Gorm and the Atlantic Oceanin the distance. It is also accessible from Glencraff to the north, where there is parking for the Tullyconor Loop, a loop which is very short but provides an entry point for taking on this hill, or even a full Glencraff horseshoe encompassing Leenane Hill on the other side of the valley.

I didn't start recording the track until about 800m in. So actual walk length would be about 12km rather than 11.2km as recorded. 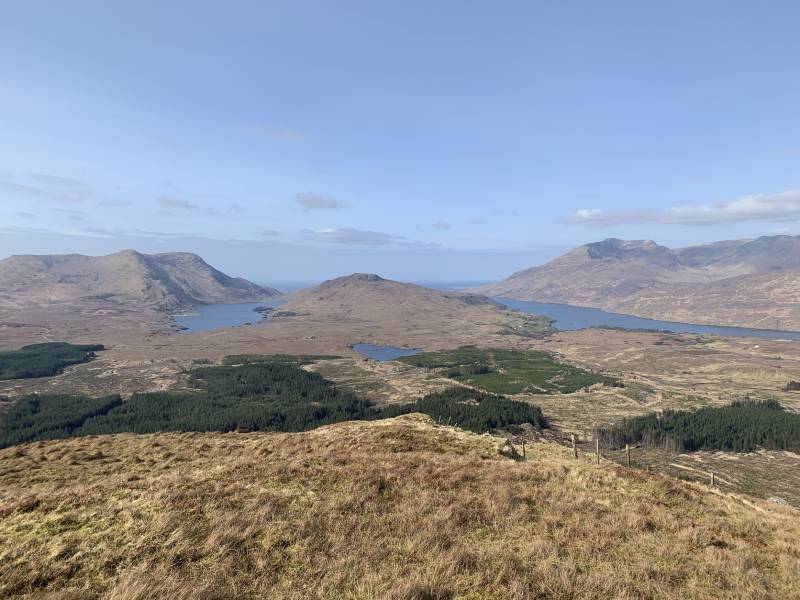 NOTE: ALL information such as Ascent, Length and Creator time taken etc should be regarded as approximate. The creator's comments are opinions and may not be accurate or still correct.
Your time to complete will depend on your speed plus break time and your mode of transport. For walkers: Naismith's rule, an approximate though often inaccurate estimate, suggests a time of 2h 50m + time stopped for breaks
NOTE: It is up to you to ensure that your route is appropriate for you and your party to follow bearing in mind all factors such as safety, weather conditions, experience and access permission.