Summit Comment 500plusclub 16 hours ago
Hiked church mountain as part of a loop, continuing along corriebaks, pinnacle and back through Donard village. They seem to be installing new fencing and pedestrian gates

pdtempan 20 hours ago
I climbed Bengorm on a clear, sunny day in May as a way of reaching the higher target of Corranabinnia. During the whole walk of 6.5 hours, my only human encounters were on the lower slopes o...

Collaborative entry Last edit by: Peter Walker a day ago
Broaghnabinnia provides great views of the Reeks, Carrauntoohil in particular, from the south. It is steep on all sides and visitors should be comfortable with scrambling. From the east park ...

Collaborative entry Last edit by: Peter Walker a day ago
There is parking for a couple of cars at V 849 817. Cross the gate into some woodland and proceed along a short track (paved with concrete slabs) into a grassy field. Head SSE, making sure to...

Collaborative entry Last edit by: Peter Walker a day ago
Part of the Stumpa Duloigh massif, the southeast top of Stumpa Duloigh is an easy ridge which heads east from the main summit towards Knocknabreda.This entire range of hills sits between the ...

march-fixer 2 weeks ago
We were blessed with magnificent weather for this trek. While the County Council is updating the carpark, we park... walk, Len: 7.3km, Climb: 689m, Area: An Earagail, Derryveagh Mountains (Irelan|...

Collaborative entry Last edit by: Peter Walker a day ago
Stumpa Duloigh itself is a highpoint at the head of a circuit of Gearhameen, above Lough Duff. Though in itself undistinguished, immediately north east of it and so close as to feel part of t...
Most Recent Monthly Newsletter.
Conditions and Info
Use of MountainViews is governed by conditions and a privacy policy.
Read general information about the site.
Opinions in material here are not necessarily endorsed by MountainViews.
Hillwalking is a risk sport. Information in comments, walks or shared GPS tracks may not be accurate for example as regards safety or access permission. You are responsible for your safety and your permission to walk.
See the credits and list definitions.

Visit our Facebook page.
Video display
Bunsen7: Track 4389 in area near Croghan Hill, North Midlands (Ireland)
An island in a sea of bog

Track follows route advised by Fergalh on the Croghan summit page. Croghan Hill is a very isolated summit, an island in a sea of bog.
Parked at Community Centre to avoid risk of parking inappropriately in centre of village - this may be unnecessary. Area behind community centre appeared to be used for grazing. Walked south eastwards back to centre of village and took a left - followed road heading northwards.
Took unnecessary detour west at a gate - watch out for this as you can be fooled by signage - this leads to a commercial adventure centre (not in use on this day). Returned to road afetr realising mistake.
At end of road after a caravan you see a modern single storey bungalow with floor to ceiling glass - there is a pedestrian gate on the left which leads to a hardcore path, which subsequently turns onto a cattle track.
Cattle grazing on summit.
Returned by way of ascent.
An interesting oddity on the skyline south west of Croghan is the Tullamore Transmitter. It is located in the vicinity of N420 255. It is the tallest man-made structure in the Republic of Ireland. It rises 290m above ground level. It has a curious pencil profile from afar, presenting an incredible slenderness ratio. Apparently it may soon be dismantled as it has not been used since 2008.
The trig pillar on Croghan was recently replaced. It is a work of art, referencing geology, mythology and the Old Bog Man. That hasn't stopped some eejit scratching his name into it though. 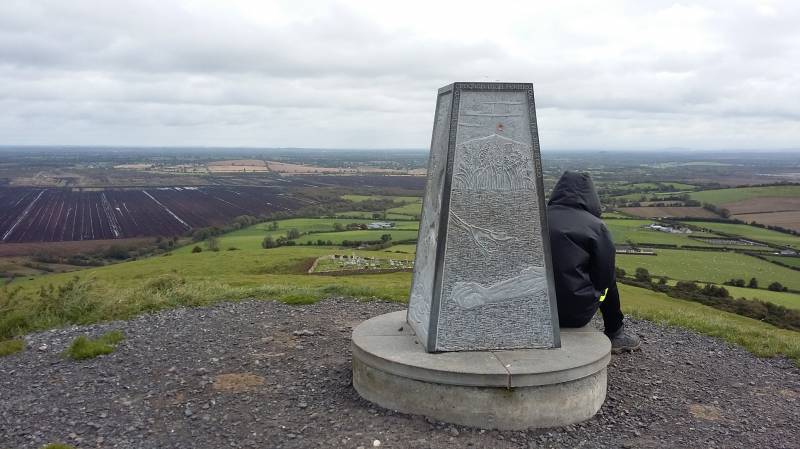 NOTE: ALL information such as Ascent, Length and Creator time taken etc should be regarded as approximate. The creator's comments are opinions and may not be accurate or still correct.
Your time to complete will depend on your speed plus break time and your mode of transport. For walkers: Naismith's rule, an approximate though often inaccurate estimate, suggests a time of 0h 58m + time stopped for breaks
NOTE: It is up to you to ensure that your route is appropriate for you and your party to follow bearing in mind all factors such as safety, weather conditions, experience and access permission.