Summit Comment GerryCasey 4 hours ago
Climbed it September 29th 2020. Summit was covered in cloud when I set off but cleared by the time I reached the top. Wonderful views from the summit

caillin_deas a day ago
Visited Benbaun on Sept 26th '20 and what a day for it! Clear, blue skies, slight breeze, excellent visibility. I really, really enjoyed this hike.Approached this peak from the North. Parked well ...

TommyV 3 days ago
Having driven up to the summit of the Tountinna in poor weather conditions I felt compelled to come back on a fine day and follow the route mentioned by oldsoldier up by the Graves of the Leinster...

liz50 4 days ago
Having visited the only other summit in the North Kerry group, Maulin we then tackled the highest which is 265m tall and must be the easiest summit to bag!. Following the directions given in earli...

liz50 5 days ago
Having decided to visit all the summits in the North Kerry area listed in Mountainviews (yes-there are only 2!) on a fine late September day we started with the lower summit of Maulin at 217m. App...

Forum: General pdtempan 4 days ago
Today's guided walk to Mullaghcarn as part of Feile Pheadair Joe 2020 has had to be cancelled because I am sick with a tummy bug and unfit to drive or walk. As it was intended as a place-names the...
Most Recent Monthly Newsletter.
Conditions and Info
Use of MountainViews is governed by conditions and a privacy policy.
Read general information about the site.
Opinions in material here are not necessarily endorsed by MountainViews.
Hillwalking is a risk sport. Information in comments, walks or shared GPS tracks may not be accurate for example as regards safety or access permission. You are responsible for your safety and your permission to walk.
See the credits and list definitions. 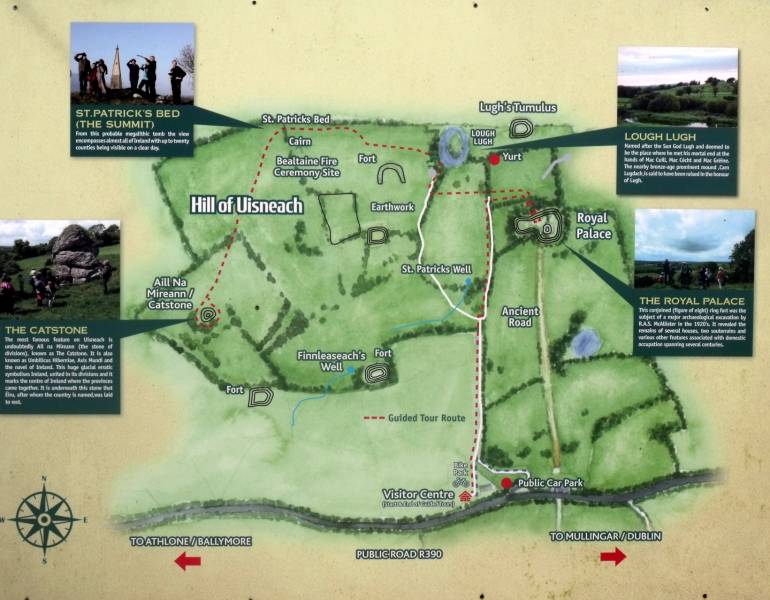 Photo of Information board located at visitor centre
On 5th September 2020 I had the good luck and good sense to spend a few hours on a tour of the Hill of Uisneach in County Westmeath. See http://uisneach.ie/guided-tours/.
Although well advanced in years, I have not yet attained eligibility for Charlie Haughey’s free travel pass so had to pay €15 for the tour. Had I been a student or possessor of proof of seniority then I would only have to expend €12. Had I been under 12 then I could have had the tour for free – soar in aisce! A family ticket for 4, 2 adults and 2 children, can be had for €25.
I don’t begrudge the fee paid though as the knowledgeable guide gave a non-stop running commentary which was brilliant mixture of Archaeology, Mythology and plain old Blarney. It was both highly educational and richly entertaining. Excellent farm husbandry in evidence also. 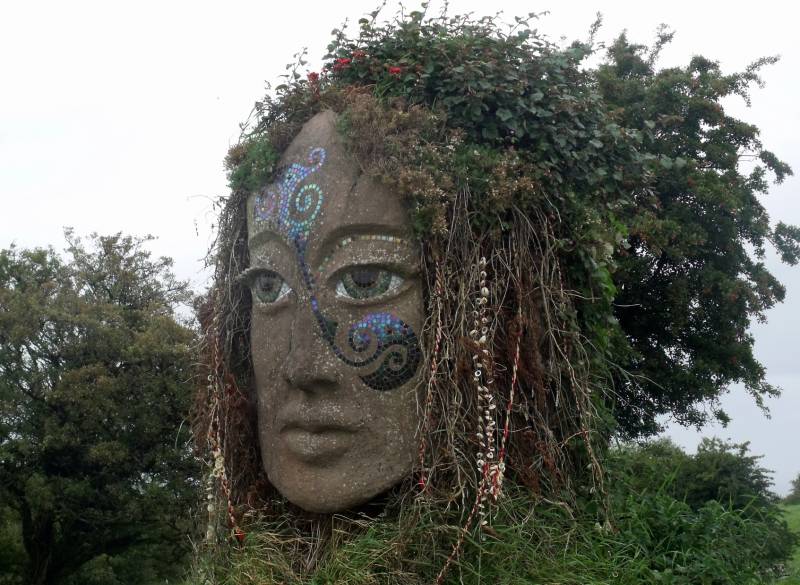 A representation of Ériu, daughter of Delbáeth and Ernmas of the Tuatha Dé Danann,after whom Ireland is named, has been placed on the hill.
Although only 182 metres above sea level, as it is situated in the middle of Ireland’s Central Plain, the views in all directions, on a clear day, are extensive. In theory, when 500m above sea level the horizon is approximately 80 kms distant. 180 m above sea level gives a theoretical horizon distance of 48kms. So, combining the two calculations, in theory, a hilltop 500m above sea level, and located considerably more than 100kms away, should be visible from Uisneach on a clear day. 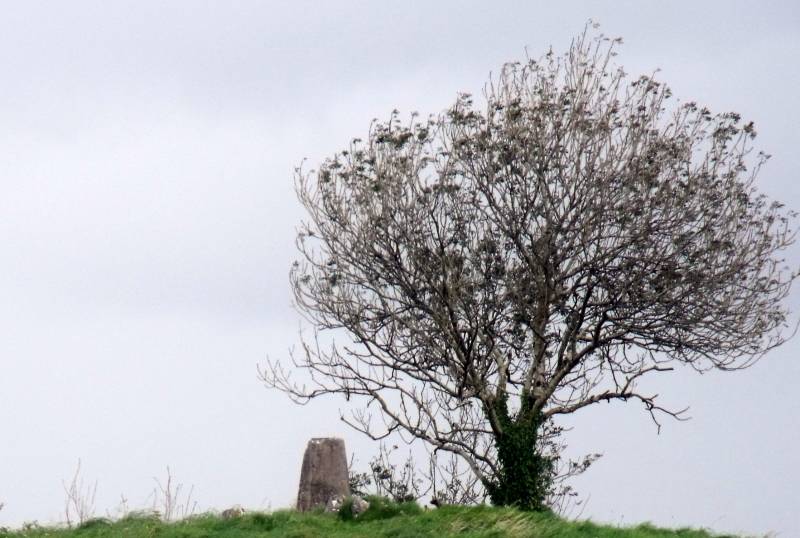 The trigonometric pillar on the summit of Uisneach
The tour includes a visit to the site of the Royal Palace and the reputed resting place of Lugh Lámhfhada of the Tuatha Dé Danann. The tour guide even gave a thrilling and fascinating description of the battle in which Lugh slew his grandfather, Balor of the Evil Eye, and routed the Fomorians. After visiting the summit trig pillar, the tour made its way to Aill na Mireann, The Division Stone or The Catstone.This 4m high erratic boulder is the site of a unique barrow and is the reputed centre or navel of Ireland. 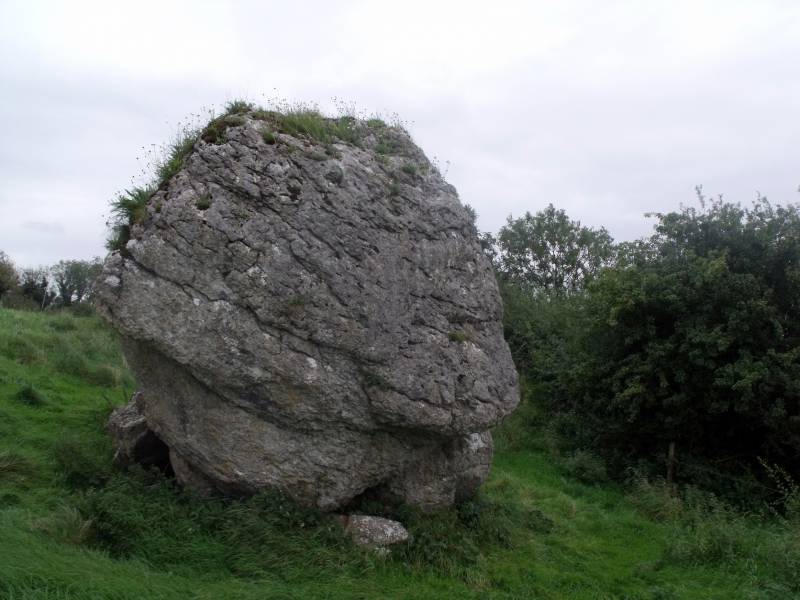 Aill na Mireann - The Catstone
The Hill of Uisneach is on privately owned and managed farmland and access is normally only possible by guided tour. There are two bulls on the farm, Finnbhennach and Donn Cúailnge, called after the two Táin Bó Cúailnge bulls - so unless you are very confident in your bull handling skills, unauthorised entry is not advised 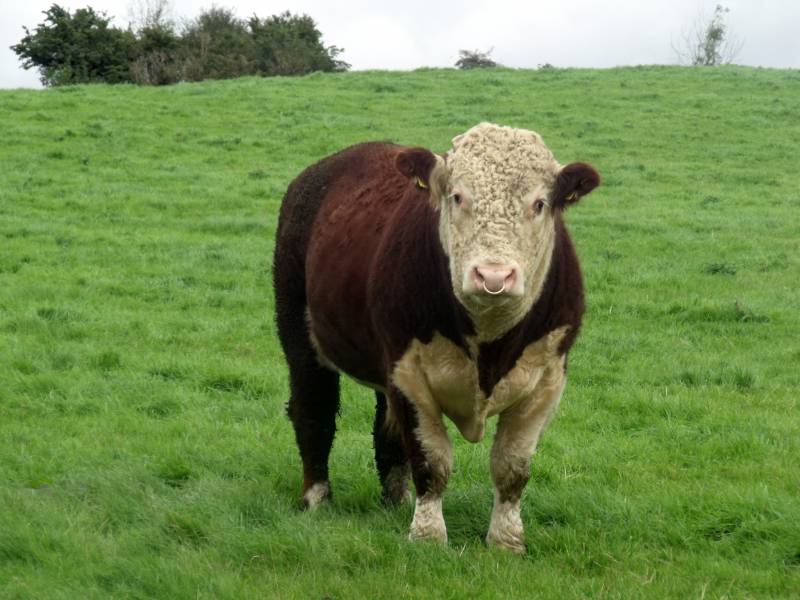 Finnbhennach - called after the white horned bull of Connaught
There is a wealth of information to be found about Uisneach on the Internet, some more laced with myths than others. I particularly like the article by the late gentleman of letters, Padraic O'Farrell in " An Irishman's Diary" - from a 1998 edition of The Irish Times see
https://www.irishtimes.com/opinion/an-irishman-s-diary-1.220209
(There are some minor misprints in Mr O'Farrell's article, and probably a few in my own text above - Donn or the Hundred Battles should read Conn of the Hundred Battles)

Ah yes, a real live bull. So often you are left wondering whether a Bull Warning sign is fictitious and really a scare. Not this time!

NOTE: ALL information such as Ascent, Length and Creator time taken etc should be regarded as approximate. The creator's comments are opinions and may not be accurate or still correct.
Your time to complete will depend on your speed plus break time and your mode of transport. For walkers: Naismith's rule, an approximate though often inaccurate estimate, suggests a time of 0h 52m + time stopped for breaks
NOTE: It is up to you to ensure that your route is appropriate for you and your party to follow bearing in mind all factors such as safety, weather conditions, experience and access permission.