Fergalh 7 hours ago
From Foel Ddu head west to the West top. Than a steep decent follows to the col. A river crossing and a steep ascent leads to the unmarked grassy summit. Afterwards a straight forward walk nort...

Fergalh 7 hours ago
Took very steep road west of the wonderfully named welsh town of Ysbyty Ifan. Parked at end of tarmac road at gate at small grass layby beside wall. Followed garssy track south all the way to a...

Foel Boeth: View from the east

Fergalh 7 hours ago
This was my third hill called Foel Beoth in the area and was hard earned. This is the view from the west top of Foel Ddu as there was no path and declining light, the route decision was important.

Fergalh 8 hours ago
From Waun Garnedd y Filiast head south west along fence back to track. This winds around the minor summit of Brottos eventually you will arrive roughly south of Foel Beoth. From here head direc...

Fergalh 8 hours ago
This is a photo of Carnedd y Filast from Waun Garnedd y Filiast. The track that leads to the summit can be seen clearly and the difficult ground to cross between the two is also apparent.

Fergalh 8 hours ago
From Carnedd y Filiast head east. The track from the south finishes here after a short walk leave the track to head north west along the fence (county boundary) to the unmarked summit. The grou...

Fergalh 8 hours ago
From Carnedd Lechwed Llyfn follow the fence east which is also the county boundary The undulating and boggy ground is very wet in spots but eventually you will reach the final ascent which is d...

Fergalh 8 hours ago
From Foel Beoth a short descent North west leads to col. Than a gradual ascent over heathery boggy ground passing a small cairn on the way follows. Eventually you will arrive at the summit besi...

Fergalh 9 hours ago
Here is a view over the heather towards Llyn Celyn from near the summit. Bizarely in a small area there are 4 hills over 500 metres all with the same name. This was my second of the four hills

Fergalh 9 hours ago
Park on A4212 on layby beside Llyn Celyn. Walk with care on busy road to track that leads into forest. Follow to edge of forest and follow the winding track north to just below the summit. A sh...

Fergalh 9 hours ago
Climbed from the north west, over a bridge and up across fields to the summit. It should be noted that since I climbed on another website the owner has advised that this is private property.

Inishlay: in the shadow of Lettermore

markmjcampion a day ago
Paddled over against a stiff breeze from Eragh island. Had a smile on my face brought on by great views up to the Maamturks as well as a cone of strong sunlight inviting me west. Landed at L907...
Most Recent Monthly Newsletter.
Conditions and Info
Use of MountainViews is governed by conditions and a privacy policy.
Read general information about the site.
Opinions in material here are not necessarily endorsed by MountainViews.
Hillwalking is a risk sport. Information in comments, walks or shared GPS tracks may not be accurate for example as regards safety or access permission. You are responsible for your safety and your permission to walk.
See the credits and list definitions.

From the OSI 16 map, the Ben Bulben Forest Walk at Gortarowey looked an interesting spot from which to attempt Benbulbin´s peak. I started the loop heading northeast but less than a km from the start I found a gate and passed through it onto the steep grassy slopes, topped by the rocky buttresses of Benbulbin´s north face. I gained height slowly while crossing under the buttresses and the vertical gullies between them. 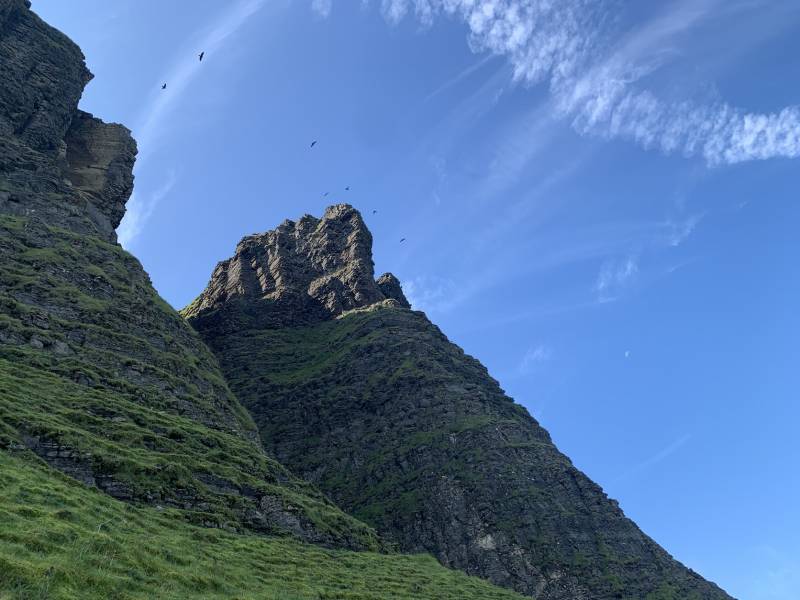 Finally, I came to a wider and apparently less vertical gully situated above the old quarry at the northern corner of the mountain, and went up for a closer look. The climb up to the gully, going just left of the quarry, was very slippy and steep, over an unpleasant damp clay studded with stones. But looking into the gully, it seemed it might be doable. 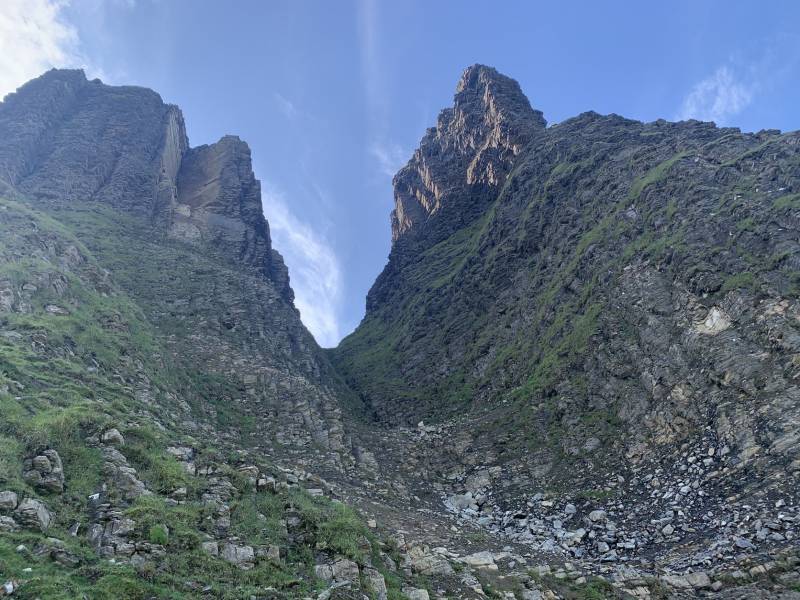 I traversed across, dropping slightly. The unpleasant damp clay made this harder than it looked. When I got to the first high rocky barrier at the bottom of the gully, I began to climb it but with very slippy holds I gave up and descended. I crossed to the left of the gully, thinking I would climb over the loose clay and then pass onto the gully floor above the stone ledge. It was, again, too damp and crumbly to the touch and felt very unsafe. After a couple of steps, I had to descend again, which was quite unnerving given how unsafe my holds felt. I felt I had only been a move away from potentially getting stuck. I gave up the gully and traversed further round the corner in search of another route up. The grassy ground I was on narrowed to an initially pleasant little balcony path, which later became uncomfortably exposed and finally dropped off a cliff at Cloyragh. From its apparent lack of destination, I suppose it was a sheep track, rather than a people one.

The path at its most exposed, just before dropping off a cliff: 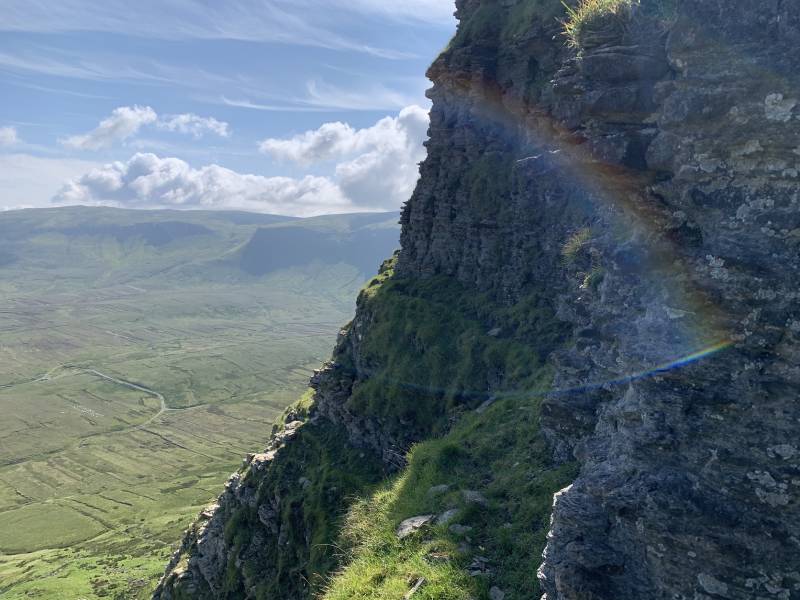 I turned back for the third time and prepared to go back towards the gully to find a way down to lower ground. But I spotted a grassy ramp, invisible coming in the other direction, which went between the crags and was scramblable. It led onto a walkable grass slope, passing by a few more crags and coming out onto the featureless plateau.

After the trig, I visited the south-west corner of the mountain at Theebaun. It was a beautiful day and the easy walking on this part of the plateau was a relief. There were a couple of very dark, deep-looking pools on the way, with fences around them. Then I wandered back past the trig towards the SE top. At the col, I saw a sheep stuck in a roundish sinkhole of black bog. The back legs and back half of the body were under the mud and it was flailing helplessly. Two walkers from a group ran over, grabbed a horn each and after a couple of efforts they pulled the sheep out and it scampered away. The mountain was beginning to give off a sinister vibe.

Clouds had gathered over Benwiskin and Annacoona and were approaching, so after taking in my surroundings again at the SE top I headed back down. I kept a high line slightly below where I had ascended as I wanted to get another view and see if there was a good ascent line I could have taken but none was evident. I was attracted by the cliffs and outcrops of Cloyragh and gained some height to take in the amphitheatre there. 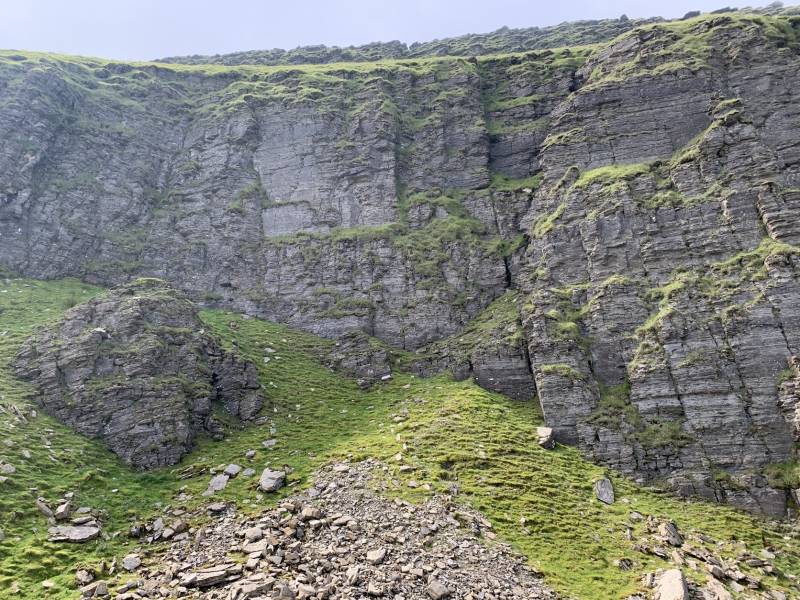 I descended to the northeast edge of the Forest Walk, where I had planned to begin the ascent initially. The fence there was depressed, as if used by others who had tried to ascend from here. It would be interesting to see their routes. I met two women on their way up. They had just passed over the fence and wanted to know about the route. I advised them to go back to their car and start from Luke´s Bridge, which had been visible from slightly higher up and was hopping with cars, most people milling around the bottom but some climbing Benbulben from there. They did turn back.

It seems the only straightforward option using the Forest Walk would involve leaving the walk at its northeast edge and staying low until more or less reaching the line of ascent used from Luke´s Bridge, and if you are doing that you can do it much easier from the bridge. The route I ended up taking, after several missteps, is not recommended but perhaps there is another way, though certainly nothing easy and nothing without scrambling. Steepness and the horrible damp, clayey ground seem to rule out the wide gully for those without climbing equipment, or so I found.

This is a cracker of an experimental route .. you can feel the trickiness.

NOTE: ALL information such as Ascent, Length and Creator time taken etc should be regarded as approximate. The creator's comments are opinions and may not be accurate or still correct.
Your time to complete will depend on your speed plus break time and your mode of transport. For walkers: Naismith's rule, an approximate though often inaccurate estimate, suggests a time of 3h 23m + time stopped for breaks
NOTE: It is up to you to ensure that your route is appropriate for you and your party to follow bearing in mind all factors such as safety, weather conditions, experience and access permission.