cha 2 hours ago
Early morning start on Friday 27th May. I followed the route described in Adrian Hendroff's The Dingle, Iveragh & Beara Peninsulas Book. A bit of a trudge up to Lough Cummeenapeasta but from there...

simon3 3 hours ago
View of the summit from Benlevy, across Lough Corrib.

simon3 3 hours ago
This is a view of Knocknagussy from Mount Gable to the east. Behind the summit in this view is the Maamturks ridge, with Binn Mhairg just to the right of the top of the highest point of Knocknagus...

simon3 3 hours ago
On a summery day in 2022 our party looked down on Lough Coolin to the NE of the Benlevy ridge. To the top of the picture is part of Lough Mask and to the top right some of the village of Clonbur.

Summit Summary Collaborative entry Last edit by: simon3 4 hours ago
An obvious place to start is from Ballard, reached on a single track road at M072539 where there is parking for around 5 cars.. Proceed over the ladder style and follow the track uphill, grassy th...

InTheFade 5 days ago
A nice hike up Gleann na gCapall up to Lough Erhogh ascending up the back to saddle between Mangerton and Mangerton Nort walk, Len: 11.6km, Climb: 733m, Area: Mangerton (Ireland) ||

Collaborative entry Last edit by: simon3 4 days ago
Binn Mhairg or ‘Peak of Woe’ has a slightly off-line location. Situated as it is at the end of a ridge extending 500 metres north from Binn Chaonaigh, it is just that bit too isolated to attr...

Track 4671 Onzy 6 days ago
walk, Len: 8.3km, Climb: 471m, Area: Spain () ||
Most Recent Monthly Newsletter.
Conditions and Info
Use of MountainViews is governed by conditions and a privacy policy.
Read general information about the site.
Opinions in material here are not necessarily endorsed by MountainViews.
Hillwalking is a risk sport. Information in comments, walks or shared GPS tracks may not be accurate for example as regards safety or access permission. You are responsible for your safety and your permission to walk.
See the credits and list definitions.

There is some very boggy ground on this route so would advise waiting for a day with good visibility as the views from the hilltops will compensate for the hardship and nuisance encountered on the wet ground. 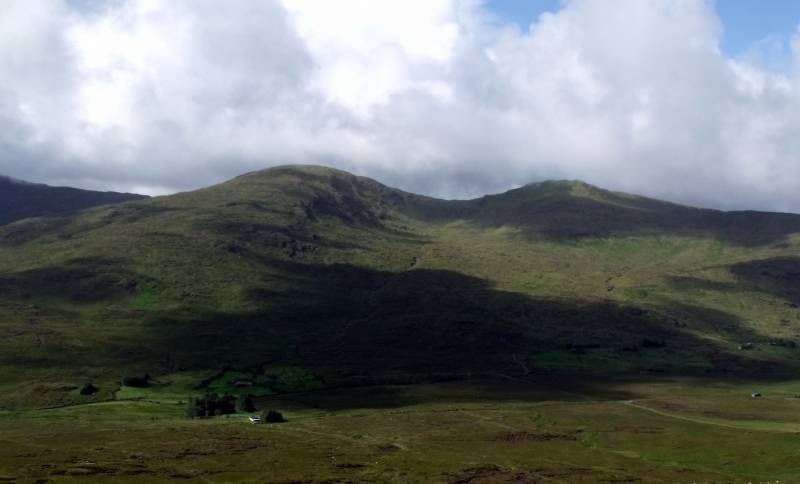 Good views across the Reelan Valley to the Lavaghs on the ascent of Croveenananta.
Had intended following Garmin's Track 2074 but, as I drove along the narrow lane to Garmin's start point, two very stubborn, uncooperative sheep insisted on walking or running ahead of the car and I couldn't get past them. To avoid harassing the sheep I changed plan and parked beside a ruin at around G94785 93686 and headed straight up Croveenananta along the west side of the fence. It was a steep enough climb, about one kilometre with 270m ascent, but on good ground. 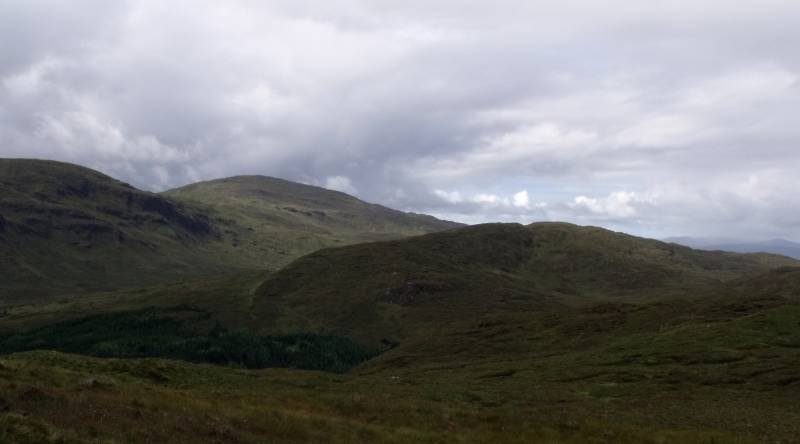 Croaghubbrid with Silver Hill & part of Lavagh Beg in the background
The col between Croveenananta and Lacroagh was very wet and one had to pick one's way very carefully to avoid going thigh deep into very unpleasant black stuff. Slí na Finne / Slí Dhun na nGall passes through this col and this section of these walks is a very unpleasant morass. 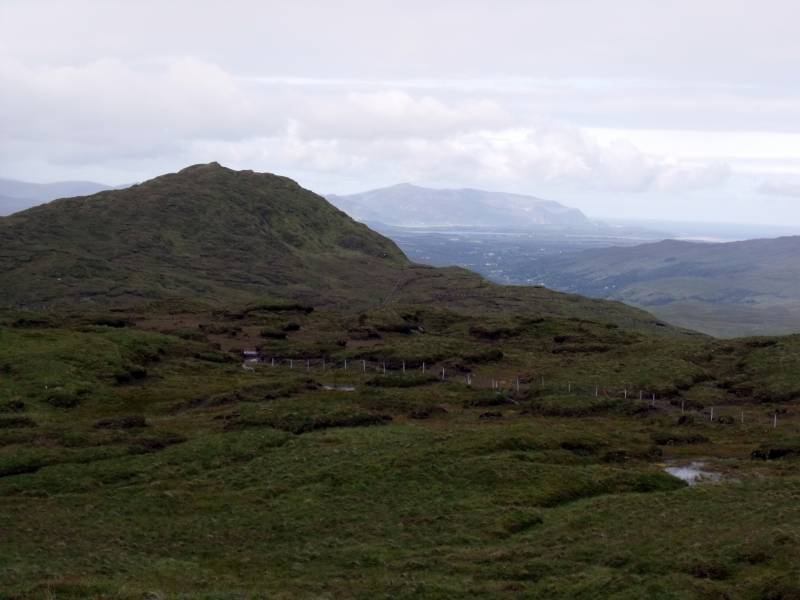 Lacroagh from the east with Slievetooey on the horizon
The stretch between Lacroagh and Croaghugagh was even worse - terrain as haggy and boggy as I've ever encountered apart, perhaps, from the "land" between Finlieve (578m) and Shanlieve (626m) in the Mournes.
The marvellous views from Croaghugagh, my lunch spot, were ample compensation for the slog through the mire though, especially across Lough Ea with Slieve Snaght and the Derryveaghs on the horizon. 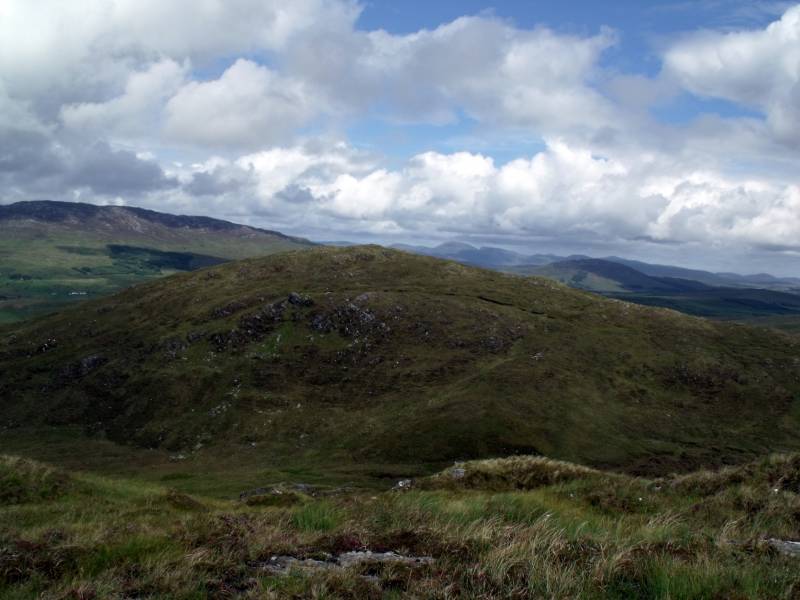 Croaghugagh from Croaghubbrid with Aghla (Fintown) behind with Slieve Snaght and the Derryveaghs on the horizon.
The last hill, Croaghubbrid, was a dawdle and gave good views across to Silver Hill and the Lavaghs. Descended to the lane then and dandered back along the lane to the car, relishing the nice view of Gaugin ahead as it alternated between shade and sunshine under Paul Henry skies. 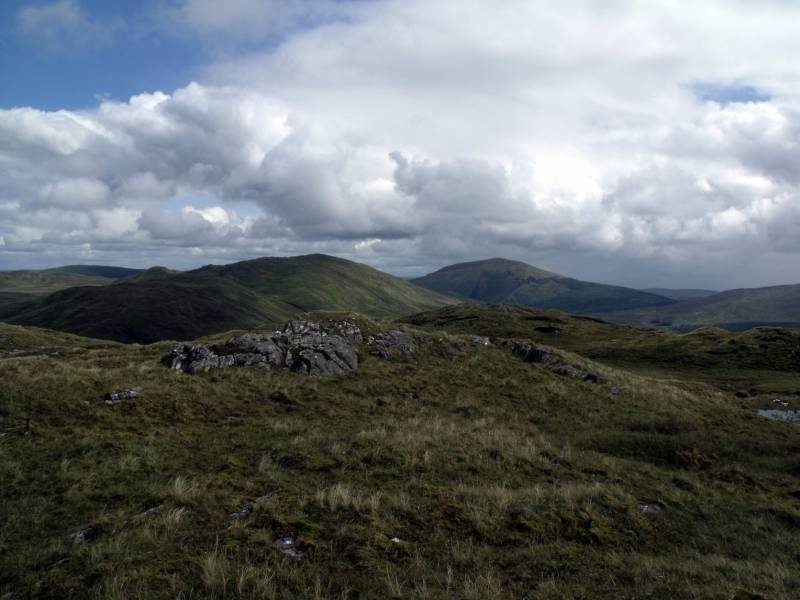 This is a straightforward and quick round IIRC with some rough ground between the 3rd and 4th tops.

NOTE: ALL information such as Ascent, Length and Creator time taken etc should be regarded as approximate. The creator's comments are opinions and may not be accurate or still correct.
Your time to complete will depend on your speed plus break time and your mode of transport. For walkers: Naismith's rule, an approximate though often inaccurate estimate, suggests a time of 2h 31m + time stopped for breaks
NOTE: It is up to you to ensure that your route is appropriate for you and your party to follow bearing in mind all factors such as safety, weather conditions, experience and access permission.