; Walk in Britain, Ben Alder Sron Bealach Beithe Sron Coire na h-Iolaire Beinn Bheoil, ascent 980m, length 17.5km
Cookies. This website uses cookies, which are small text files that the website puts on your computer to facilitate operation. Cookies help us provide a better service to you. They are used to track general user traffic information and to help the website function properly.

Lost in the peat hag maze !!

Summit Comment MichaelG55 8 hours ago
04.08.2020 Climbed Conic Hill during Day 2 of the West Highland Way. 60mm of rain fell during day turning path up hill into a raging stream. No views but locals told us that superb views of Loch L...

gerrym 14 hours ago
Started this walk from the beginings of Glenlark forest, reached by a high and lonely road from the hamlet of Sperrin - there is room for several cars to park at a cattle grid at 646927. Walk back...

wicklore 15 hours ago
Commentators have mentioned the difficulty in finding the concrete plinth that houses an Ordnance survey disc marking the summit of Slieve Anierin. The summit area is relatively flat, with a large...

Forum: Suggestions simon3 3 days ago
The Arderins, the list of Irish Mountains of 500m with a prominence of 30m has now been recognised as a premier list providing a lifetime challenge.In a joint announcement Mountaineering Ireland a...

Summit Comment vikinghar a day ago
Slieve Lough Salt was the very first mountain I climbed as an aspiring hill-walker. Me and a mate bought a book on walking in the Donegal mountains and chose Lough Salt as our first venture and, y...

Summit Comment wintersmick 4 days ago
I visited this peak today with a friend and some of our children. An angry man claiming to be the owner followed us up and stated the land was private with no public access.

Forum: General Bunsen7 6 days ago
Apologies in advance for the rant but I had the misfortune to come across three seemingly abandoned teenage boys at the head of Gleniff Valley on Monday that were busy literally dismantling one of...
Most Recent Monthly Newsletter.
Conditions and Info
Use of MountainViews is governed by conditions and a privacy policy.
Read general information about the site.
Opinions in material here are not necessarily endorsed by MountainViews.
Hillwalking is a risk sport. Information in comments, walks or shared GPS tracks may not be accurate for example as regards safety or access permission. You are responsible for your safety and your permission to walk.
See the credits and list definitions.

I walked this route some years ago after spending a night camping near Culra Bothy. I was reminded of it when, during the lockdown, I was sent a link to a U Tube video of Muriel Gray on Ben Alder. The video was made around 30 years ago as part of the TV series “The Munro Show”.
See https://www.youtube.com/watch?v=aePvkd_48PQ&list=PLSPOq0H8YuOUnLvLhJ2-te1zbiTdWwKkM&index=5&t=0s
or an internet search for “Muriel Gray and Ben Alder” should also find it.
Unlike Muriel, who cadged a lift to Loch Pattack, I cycled in from Dalwhinnie, having parked at the railway station a little before 08.00. Dalwhinnie (360m) is one of the highest villages in Scotland and the site of a famous distillery. As it was September, I had contacted the estate a few days earlier to seek permission and ensure my hiking would not interfere with their stalking. The large, impressive gate at the gate lodge entrance to the estate was closed and I was wondering how to gain access when a large estate SUV drove up and the gate opened automatically. It’s about 16kms of a cycle (or walk) from Dalwhinnie to Culra Bothy with around 250m of ascent. It’s a pleasant enough cycle though from Dalwhinnie as far as Ben Alder Lodge. The track is quite smooth and well maintained and there are nice views over Loch Ericht. As I passed the lodge I heard several rifle shot as stalkers practiced and tested their aim before heading out. Parts of the track beyond Ben Alder Lodge are rough and steep and I had to dismount and push the bike uphill in places. Crossing the shaking suspension footbridge at Loch Pattack with bicycle and camping rucksack was an experience also. Before reaching Culra, weary with cycling carrying a heavy rucksack while there were lovely hills all around, I abandoned the bike and camping gear at NN530 785 and rambled over Carn Dearg (1035m) as far as Diollaird a’ Chairn and back. After returning to retrieve bike and tent, I cycled on to Culra and pitched camp at NN525 764, across the river from Culra Bothy. Culra Bothy has an asbestos problem and staying within it is not advised. The stag ponies were grazing nearby but after investigating the tent they were content to leave it alone. I had a comfortable night as the ground was level so wasn’t slipping off the sleeping mat as happens on some other nights “under canvas”. There was rain overnight but I slept through it undisturbed. 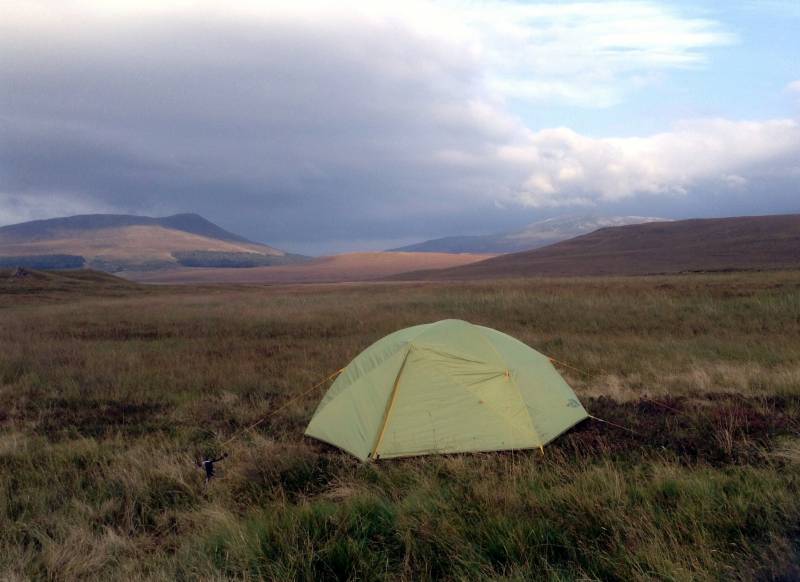 Room with a view
The following morning, due to the wet grass, the waterproofs were useful while striking camp. I put the tent and camping gear in a large dry bag and stored it and the bike out of sight before heading off for Ben Alder.
I ascended Ben Alder via the North East ridge - the Long Leachas Ridge - overlooking Coire na Lethchois. This is the route that Muriel took and described as a “sporting scramble”. It’s not nearly as tough as it looks from below and can be ascended with little difficulty. 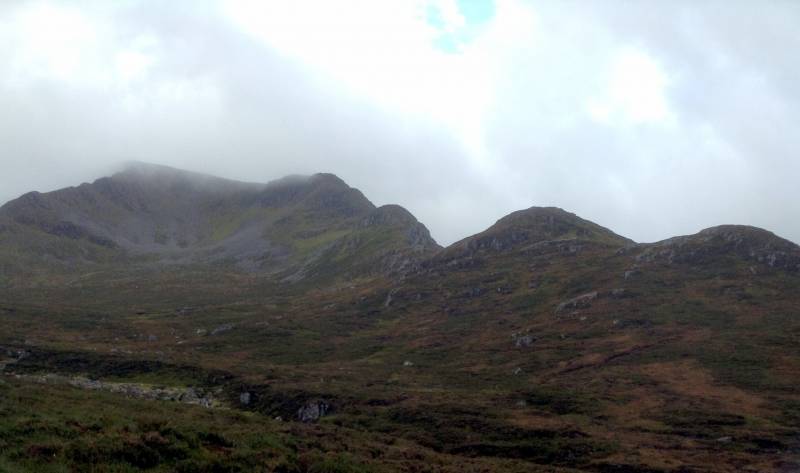 The NE Ridge of Ben Alder - Long Lachas
It was quite claggy above 1,000 m and the GPS was very useful for finding the exact summit. Visibility improved through the day though and I think I could see as far as Schiehallion, Ben Lawers and the Glen Lyon Munros. 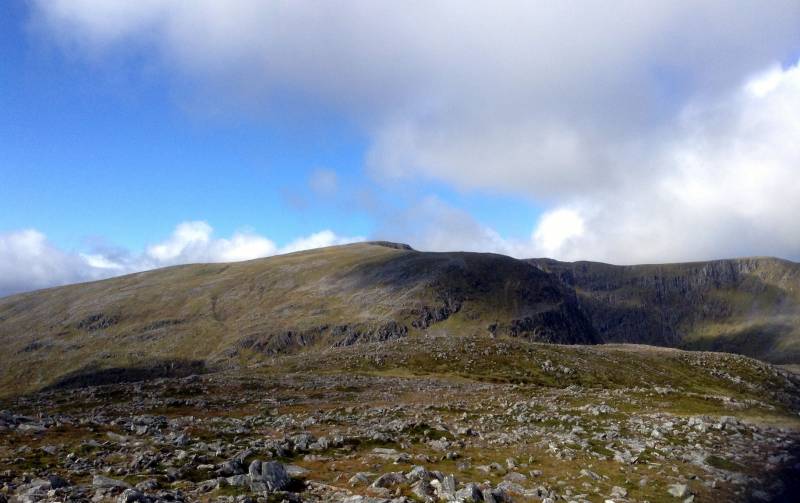 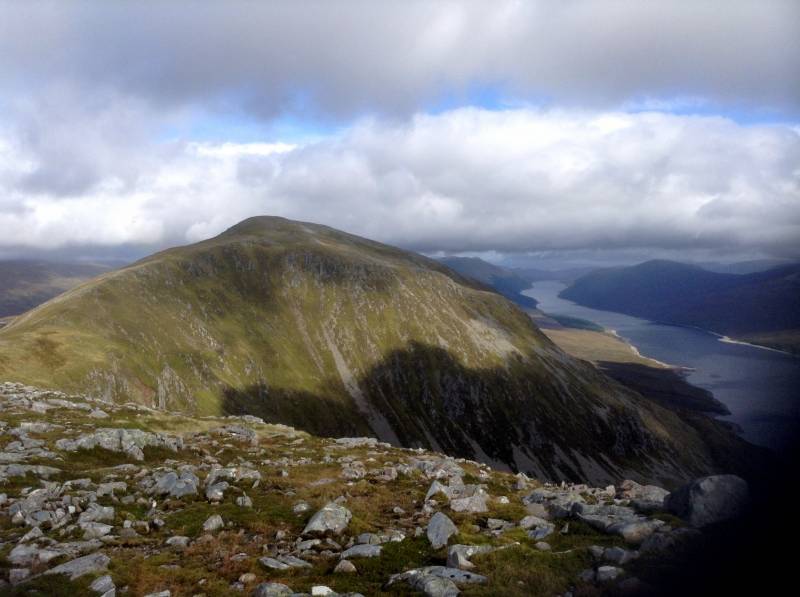 Looking North East to Beinn Bheoil and Loch Ericht
Gathered up my camping gear and cycled back to Dalwhinnie. The cycle out was much easier than the cycle in as there’s less ascent and more descent. Couldn’t help looking up towards Meall Cruaidh (897m) and The Fara (911m) as I cycled out along Loch Ericht but their delights will have to wait for another day.
( P.S. As Irving Berlin used to say to Bing Crosby " Thank you Mark ! ")

I once made Muriel Gray wince on Twitter with a story about a chicken. But that's another story.

I once drove up from Cambridge on a Friday night with the intention of sleeping in the car and then doing these two hills from the west end of Loch Rannoch to the south on the Saturday. Having slept in the car I felt in no condition at all to actually follow through with that plan, and trotted up and down Schiehallion instead!
Comment created by simon3 Jul-06

I remember with pleasure Muriel Gray's videos about the Munros. I'd say they would still be interesting.

NOTE: ALL information such as Ascent, Length and Creator time taken etc should be regarded as approximate. The creator's comments are opinions and may not be accurate or still correct.
Your time to complete will depend on your speed plus break time and your mode of transport. For walkers: Naismith's rule, an approximate though often inaccurate estimate, suggests a time of 5h 8m + time stopped for breaks
NOTE: It is up to you to ensure that your route is appropriate for you and your party to follow bearing in mind all factors such as safety, weather conditions, experience and access permission.