Colin Murphy 5 days ago
It's amazing sometimes how winter can transform an otherwise ordinary little hill into something beautiful. Slieve Rushen is a tramp through heather to a broad mound with a slightly smaller m...

Collaborative entry Last edit by: Colin Murphy 5 days ago
It is possible to drive up a narrow forest road to H23164 21626, (Corneen Wind Farm) where there is parking for a few cars. This will take you to about 350m ascent, however after that, depend...

Track 4793 eamonoc 23 hours ago
Started this walk from Carpark at Glengesh Gap, from the start the ground was very wet and boggy and continued so ov... walk, Len: 9.0km, Climb: 463m, Area: Cruach an Bheithe, Donegal SW (Ireland) ||

Fergalh a week ago
We approached this island at low tide on a windy day hoping that the channel was narrow enough to cross. However it is around 2/3 metres across with the Atlantic swell rushing through and wit...

Summit Comment moggy40 3 days ago
The gate at point B now has a lock on it, so driving is out. Bike or walk is still an option

Fine route in the Centre of Fanad Peninsula

billbaggins a week ago
Stob Dearg viewed descending Creag Dubh
Most Recent Monthly Newsletter.
Conditions and Info
Use of MountainViews is governed by conditions and a privacy policy.
Read general information about the site.
Opinions in material here are not necessarily endorsed by MountainViews.
Hillwalking is a risk sport. Information in comments, walks, shared GPS tracks or about starting places may not be accurate for example as regards safety or access permission. You are responsible for your safety and your permission to walk.
See the credits and list definitions.

This is a fairly short route (13 kms) but the ascent (approx 900 m) and the toughness of some of the ground traversed makes it a worthwhile outing nonetheless. It also includes two interesting features mentioned by Geo in their contribution on Doan – the waterfall on the River Shannagh at J 300 249 and the ascent of Doan from the South East. 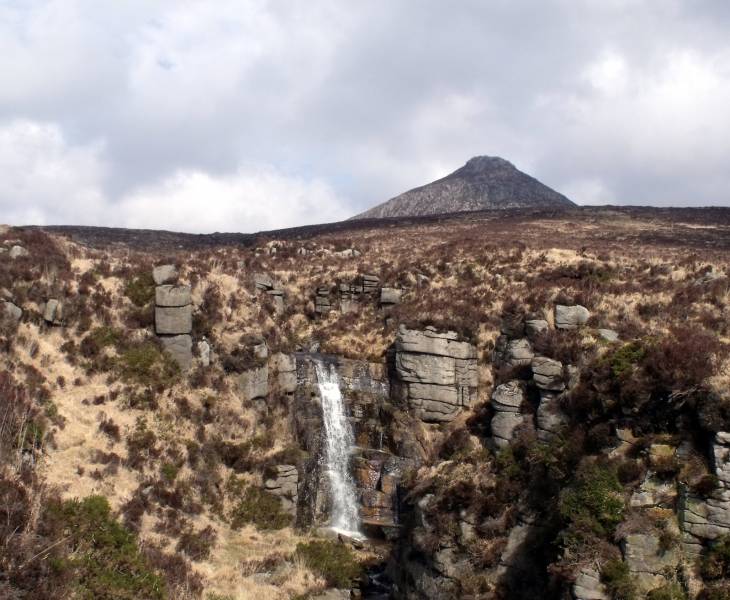 Approaching the waterfall on the Shannagh at J300 249 with Doan in the background
Parking is available at J 277 269 where there is a small carpark.
The route begins with a few hundred metres of track that eases the way to the Mourne Wall a little.
The wind will decide which side of the wall is walked while Slieve Muck is ascended and the character of the wall changes from the granite of Carn to the sandstone of Muck. The summit of Muck gives great views on a clear day. Leaving the summit of Slieve Muck for Slievenaglogh (445m) the route moves a little east away from the wall to descend via a grassy gully as the wall is interrupted by crags. Competent and/or foolhardy scramblers may prefer to come down through the crags. 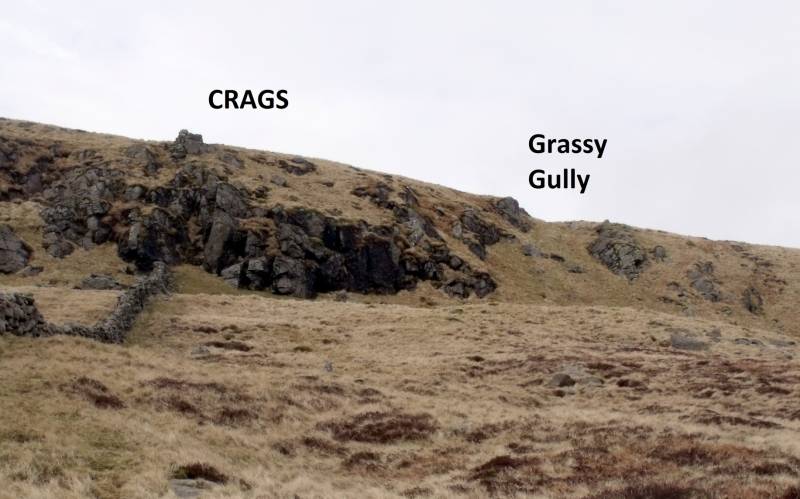 Looking back at the crags and grassy gully on the SE side of Slieve Muck
.
The path along the Mourne Wall descending from Muck to Banns Roads is steep and it moves over to the east at times to avoid steep ground and more crags. Care is required to descend safely.
The ascent of Slievnaglogh from Banns Road along the Mourne Wall is quite steep too but not as tough as it looks from Slieve Muck. If desired, Slievenaglogh can be ascended more easily by using tracks from Banns Road shown on the OSNI map.
The summit of Slievenaglogh provides a great view of Binnian and Wee Binnian across the Silent Valley reservoir. The route then goes NNE as it follows a distinct path along the high ground above the reservoir. This pleasant path is surprisingly airy as the ground drops steeply to the east down to the reservoir. It’s worth visiting Slievnaglogh on a clear day if only to ramble along this path. It’s a gentle descent with great views. 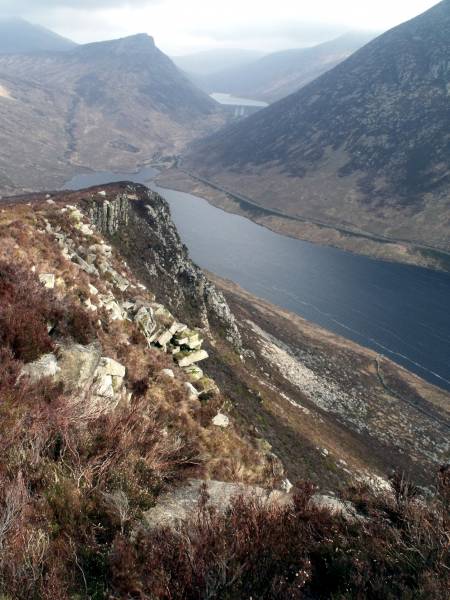 Silent Valley Reservoir from the path descending Slievenaglogh
After enjoying this path for approximately 1 km it’s time to start thinking about getting across the Miner’s Hole River and up to the waterfall on the Shannagh at J 300 249.The route crosses some rough ground on the way to the waterfall but eventually the effort pays off and this delightful feature is reached. To quote Geo, “The waterfall is a little gem and worth a few minutes of anyone's precious life”. 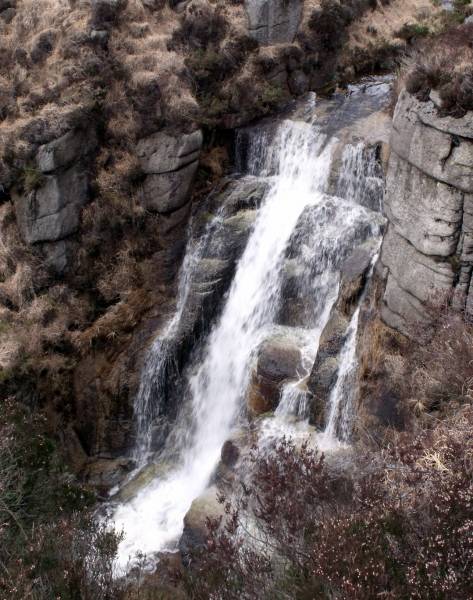 The waterfall at J300 249 from the eastern bank of the Shannagh
The route stays on the west side of the Shannagh gaining a little height before crossing the Shannagh and heading across to the SE flank of Doan. The initial going is a little easier on the west side than on the east side, with a faint path making an appearance at times.
And then, the highlight of the route – the ascent of Doan from the south east, gaining height quickly yet easily to reach the summit with its excellent views.
Descending from Doan then to the path under Slieve Loughshannagh the route heads north to the col between Slieve Loughshannagh and Meelbeg. Slieve Loughshannagh is then ascended along the Mourne Wall before visiting the summit of Ott on the way back to the car park.

NOTE: ALL information such as Ascent, Length and Creator time taken etc should be regarded as approximate. The creator's comments are opinions and may not be accurate or still correct.
Your time to complete will depend on your speed plus break time and your mode of transport. For walkers: Naismith's rule, an approximate though often inaccurate estimate, suggests a time of 4h 12m + time stopped for breaks
NOTE: It is up to you to ensure that your route is appropriate for you and your party to follow bearing in mind all factors such as safety, weather conditions, experience and access permission.