Due to its status as Probably the Most Remote Mountain in Ireland, I have wanted to climb Slieve Carr for a while. I looked into routes from the east, but reports about access issues dissuaded me, so I went for the old school route: out by the Bangor Trail; in via the Western Way. This is a long, challenging route, but in a way it would be a shame to see this mountain lose its reputation, because if Slieve Carr is not Ireland’s most remote mountain, then there is no other obvious contender for that title. 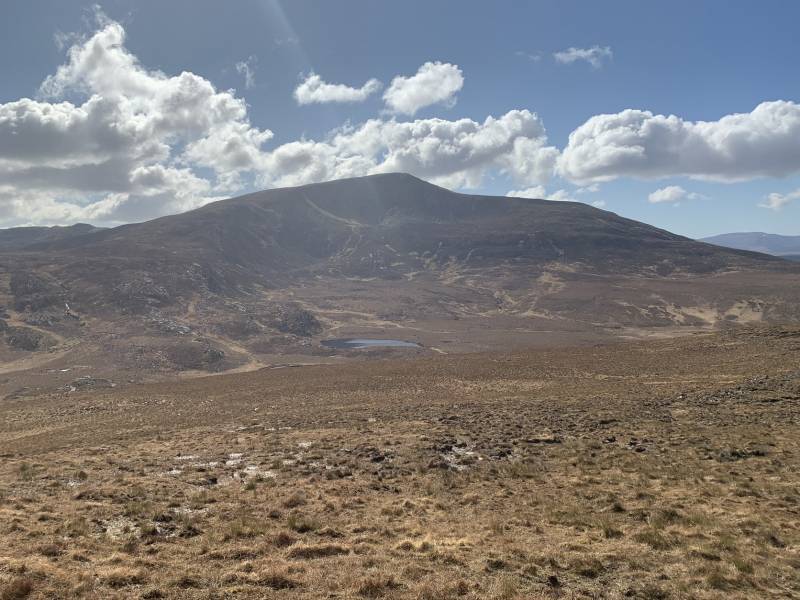 The Bangor Trail is throughout slower going than the average trail, rough and stony in initials parts, then very wet. There is some evidence of maintenance (a few sleepers and flat stones) to aid in crossing the shoulder of Nephin Beg. Glennamong's north face is quite striking from here. Once the shoulder has been passed and the descent towards Slieve Carr begins, the underfoot conditions are atrocious. Every step goes ankle deep in standing water. Even the pleasant weather couldn’t make this part of the walk fun.

Once the Tawnyanruddia spur is reached, ascent can begin, but I went a few hundred metres further along the trail first to the tin hut situated among some old stone ruins. This was a nice spot for a break, looking out over the boggy wastes I had skirted on the way in. It had taken me 2 hours and 10 minutes of solid walking (a couple of short stops to talk to other walkers and for photos) to get here (10.5 km from the start), which was more than I had estimated. I had thought the walk-in would be taken at fairly close to easy trail-walking pace of 10 minutes per km, but I had never got anywhere near that pace.

In the circumstances, the 380m ascent up the Tawnyanruddia spur was somewhat of a relief. The steep slopes were bone dry, and the short grass and heather easy to walk on. The minor summit of Tawnyanruddia, at 531m, had no marker, but provides great views, particularly towards Achill and the Mayo coast. It’s also in MV’s list of 100 Best Irish Summits, which gave an extra reason to include it in the circuit. I stopped only for a couple of photos, then made straight for the summit of Slieve Carr. It’s over three kilometres of gradual ascent, some peat hags and then rocks. I was getting tired and hungry as I approached the summit, but couldn’t rest until I got there. 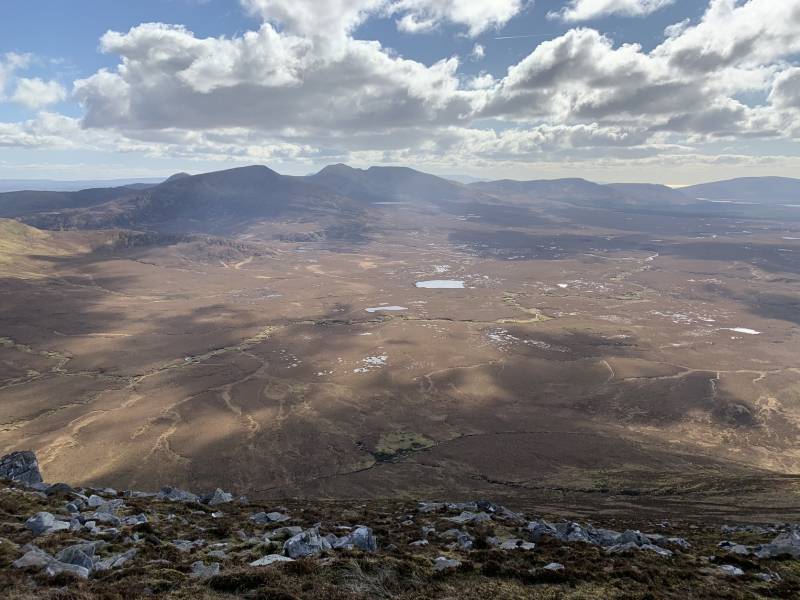 I took a break sitting against Laghtdauhybawn (the name of the large cairn on Slieve Carr), in stillness, silence, and gentle March sunshine. Daithi Ban must have been a very important personage to warrant such a big cairn on a hill so remote from all substantial habitation centres. Coastal views included north Galway, all of Mayo, Sligo, and south Donegal. Mountains included Mweelrea, Sheeffrys, Partrys, Nephin, Slievemore, Ox Mountains, Slieve League, Diamond Hill, and the mighty Letter Hill/Tully Mountain. Islands included Achill, Inishturk, Inishbofin, Clare Island. Huge expanses of bog and forest were near at hand, and the Bellacorrick wind farm breaking up the flat bog to the north. Once again, I had to commend the weather on its fine performance on the day. 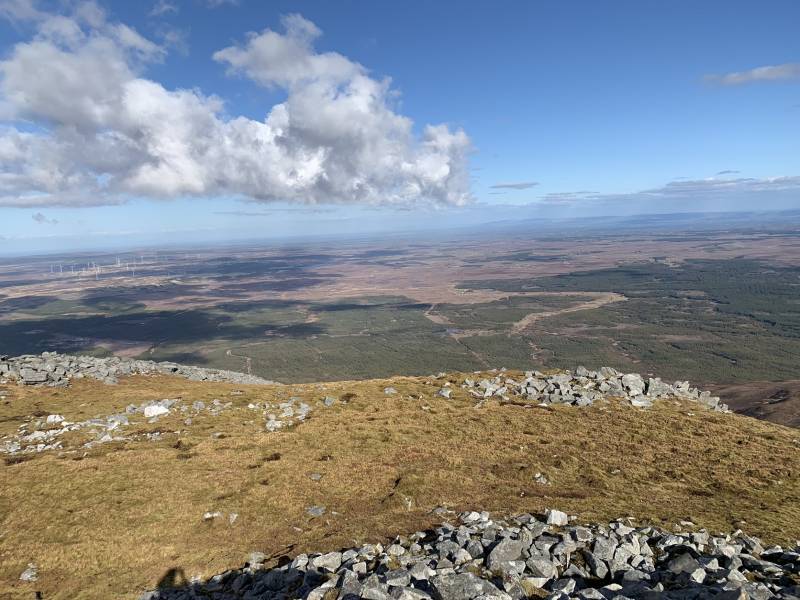 For descent, I handrailed the corries to the east of the summit ridge, and took the ridge to the south of Coire an nGarru to descend. This steep but grassy ridge provided a quick descent. The ridge just north of the same corrie provides a gentler descent and is perhaps the best option, but this was perfectly manageable. I replenished my water in the corrie lake and continued to descend towards the spot marked “Steps” on East West's Wild Nephin map. I didn’t find the steps, but did see a muddy track through the narrow strip of forest onto the forest track proper. From here another 10km of easy if slightly tedious walking on forest tracks following the Western Way brought me back to Letterkeen.

I was passed by a couple of 4-wheel drives on the WW, so if the barriers were up it would be possible to drive much of the way up here and shorten the walk greatly, though the track is rough enough. Walking the WW is certainly easier than the Bangor Trail, but to do it both ways would be tedious. The Bangor Trail provides pleasant, atmospheric walking in parts, though the final few km before Tawnyunriddia are grim, even in fine weather. I would give the place a very wide berth in poor weather.

Is Slieve Carr Ireland’s remotest mountain? It is if you go this way. 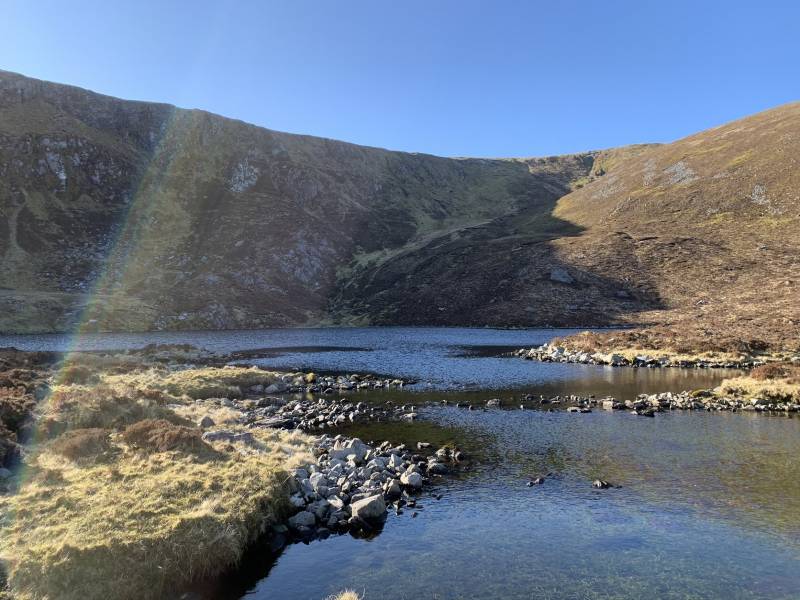 Timing of the stages of the walk worked out approximately as follows:

Plus total breaks of around 40 minutes. Total time just under 7 hours.

[The Walkmeter track of the walk gave 965m ascent, but the file as uploaded to MV is giving 1071m ascent. I think the Walkmeter figure seems more accurate, but I could be wrong.]

NOTE: ALL information such as Ascent, Length and Creator time taken etc should be regarded as approximate. The creator's comments are opinions and may not be accurate or still correct.
Your time to complete will depend on your speed plus break time and your mode of transport. For walkers: Naismith's rule, an approximate though often inaccurate estimate, suggests a time of 7h 39m + time stopped for breaks
NOTE: It is up to you to ensure that your route is appropriate for you and your party to follow bearing in mind all factors such as safety, weather conditions, experience and access permission.