Cashel Hill: Hill by the bay

markmjcampion 19 hours ago
I cycled over from Bealdangan and left the bike just after a couple of bungalows. It was only when I started walking that I spotted that you can also head off from the nearby, obvious concret...

sandman 19 hours ago
By parking at L8760028966 you can walk on to open hillside with no access issues . A gentle ascent to the summit area which unlike its nearest neighbour has no seating arrangements for the vi...

sandman 19 hours ago
Parking at L89230 29062 will allow you open hill access to the summit L89125 28564.As mentioned in the previous comment fantastic views.Having great weather and as this was the first time for...

Summit Comment Fergalh 19 hours ago
Drive onto Lettermore island, then at Lettermore village take first right. Park at space just before cottage at L89230 29062. Then proceed up hill to see a stunning vista. And this has the on...

sandman 2 days ago
Parking in the small car park at L92721 38700 which is the normal start point for those who wish to visit Knockadav and on to Shannovara this trail been part of the Connemara Way Unfortunatel...

simoburn a week ago
Spinans Hill and CloghnagauneThis route is a fantastic day out in the minor hills of West Wicklow. The Spinans are e... walk, Len: 15.9km, Climb: 561m, Area: Spinans Hill, Wicklow (Ireland) Spinans||

TommyV 2 days ago
Access to this hill is through a farm at L99675 40297. I was lucky enough to meet the farmer and his family just as I parked my car. I asked for permission and the farmer happily walked me th...

Jamessheerin 2 days ago
Well worth the effort; this hill is off the beaten track but has great views of the usual suspects in Connemara - the Bens & Turks, from an unusual angle. Going off road at L99296 40127, head...

sandman 2 days ago
Trig points were in operation for a period of circa 20 years and depended on line of sight so that is why at their locations the view is quite good, except in circumstances where, after their...
Most Recent Monthly Newsletter.
Conditions and Info
Use of MountainViews is governed by conditions and a privacy policy.
Read general information about the site.
Opinions in material here are not necessarily endorsed by MountainViews.
Hillwalking is a risk sport. Information in comments, walks, shared GPS tracks or about starting places may not be accurate for example as regards safety or access permission. You are responsible for your safety and your permission to walk.
See the credits and list definitions.

The Five Sisters of Kintail, Sgùrr na Ciste Duibhe, Sgùrr na Càrnach, Sgùrr Fhuaran, Sgùrr nan Saighead and Sgùrr na Moraich are the most westerly of the hills on the ridge guarding the north side of Glen Shiel. Three of the 5, Sgùrr na Ciste Duibhe, Sgùrr na Càrnach and Sgùrr Fhuaran, are Munros. It is a popular route as, given reasonable weather, a day spent traversing these hills can give memorable hiking and memorable views. (The South Shiel Ridge, the Saddle, The Forcan Ridge and Sgùrr na Sgine will be in view across Glen Shiel with Beinn Fhada on the other side across Gleann Lichd. There will also be nice views to Loch Duich and beyond, possibly even to Skye, ahead. ) The busy A82, the main road to Skye, runs through Glen Shiel at the foot of these mountains but, because of the height of the ridge, there is rarely any road noise while the ridge is being traversed. The route is usually walked from southeast to northwest starting at NH008 135, below Bealach an Lápan. The route, on paper, is not a long one, but it is a tough, time consuming route as parts of the route demand patience and care.
As it is linear walk, with the start a considerable distance from the finish, it is helpful if you can arrange transport to avoid a long road-walk. One option, the one I used, is to avail of the Citylink bus service. Citylink operate two services along the A82. One between Skye and Glasgow and one between Skye and Inverness. Timetables are available at https://www.citylink.co.uk/timetables.php. Citylink buses only allow passengers board at the designated bus stops shown on the timetables but passengers are allowed disembark anywhere along the route provided the driver can safely pull in at a layby.
The bus can be boarded at the bus shelter at Shiel Bridge or from the roadside at Ault Na Chruinn. Parking is limited at Shiel Bridge but there are 6 marked parking spaces set aside for hikers at Ault Na Chruinn at NH945 202. This is near Kintail Crafts and the now (2019) closed Jac-o-bite roadside restaurant. The bus shelter at Ault Na Chruinn is on the original road, now a layby, a little off the A82. The bus does not stop at this shelter. To flag down the bus you must stand on the side of the A82. You can see the bus crossing the bridge over the River Croe estuary to the north so you will have plenty of time to prepare for its arrival at Ault Na Chruinn. The bus company and the bus drivers are familiar with most hiker’s requirements – to be dropped at the start point for the Five Sisters. The destination text on my ticket even read “5 Sisters”. After boarding the bus, I was engaged in conversation by a friendly Glaswegian who had lived on Skye for the previous 32 years. He had fallen in love with the Highlands as a teenager and managed to move to Skye when he was 40. I would have enjoyed conversing with him all the way to Glasgow, but the hills were calling. After giving me some useful rucksack advice, he wished me an enjoyable day as I disembarked at the layby at NH005 135. There are two paths up to the ridge, one begins at NH005 135. The other one, which I used, begins a little farther east at NH008 136.
Whichever path you choose, the ascent to the ridge is tough going. The path to Bealach an Lápan (725m) from the road (175m) involves a climb of 550 meters over a little more than a kilometre so it is quite steep and requires great care and concentration in places. When I reached Bealach an Lápan it was cold and claggy, but I was heartened by having finally reached the ridge and hopeful that the weather forecast, which was for the day to improve, was correct. I had to put on full waterproofs though as I made my way over via Beinn Odhair and Sgúrr nan Spainteach to the large cairn that marks the summit of Sgúrr na Ciste Duibhe (1027m) 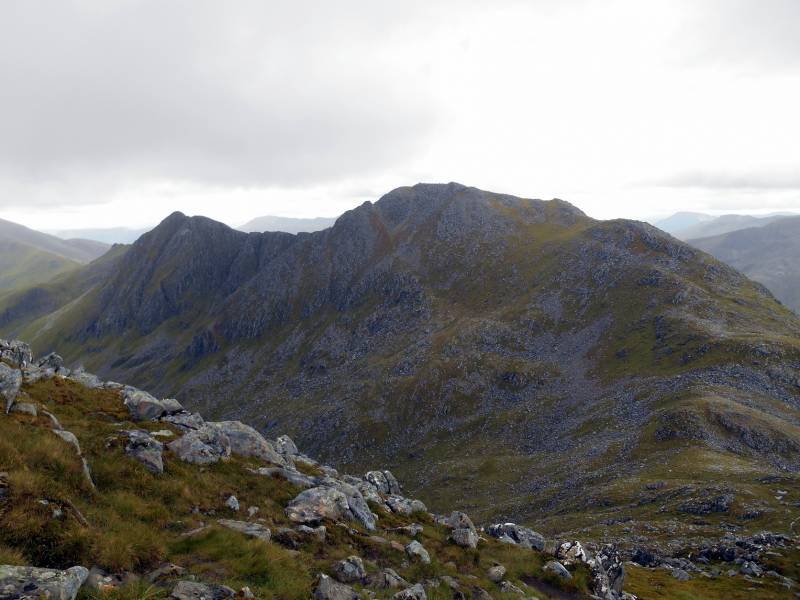 View back to Sgúrr nan Spainteach and Sgúrr na Ciste Duibhe from Sgúrr na Carnach
As I made my way to Sgúrr na Carnach (1022m) the cloud gradually began to lift, and I began to enjoy the reward for my earlier work. By the time I reached the summit of Carnach I had a great view back towards Sgúrr na Ciste Duibhe and Sgúrr nan Spainteach.
By the time I’d reached Sgúrr Fhuaran (1067m) the weather and views had improved even more 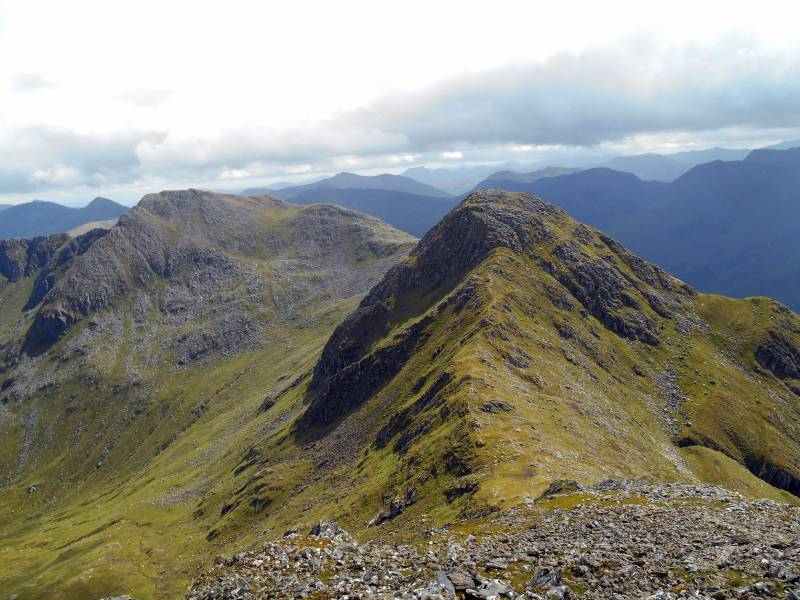 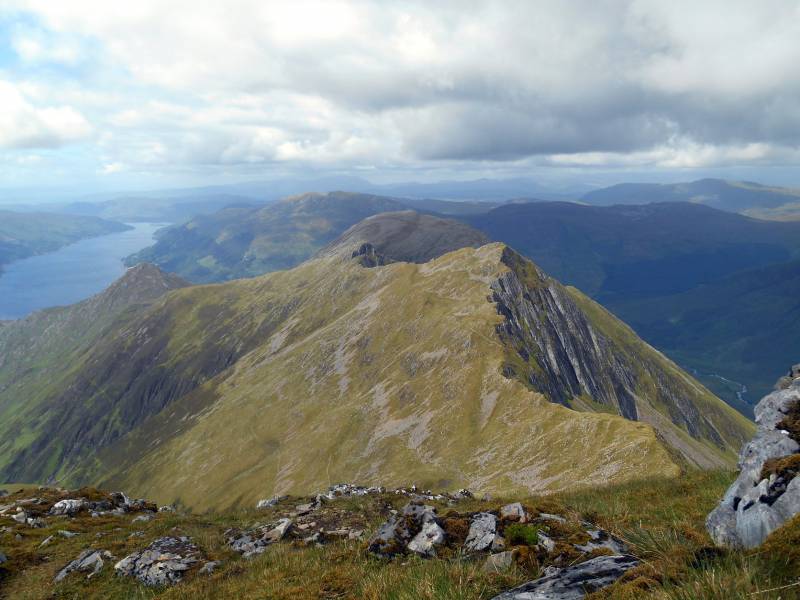 Above - Looking forward to Sgúrr nan Saighead, Beinn Bhuidhe and Sgúrr na Moraich from Fhuaran.
Loch Duich and Sgúrr an t-Searraich also in view
If you want to drop down to Shiel Bridge you can descend the North West spur of Beinn Bhuidhe towards Loch Shiel. If you are not able to cross the river east of Loch Shiel you will have to stay on the north of the loch and river until the river passes under the A82. 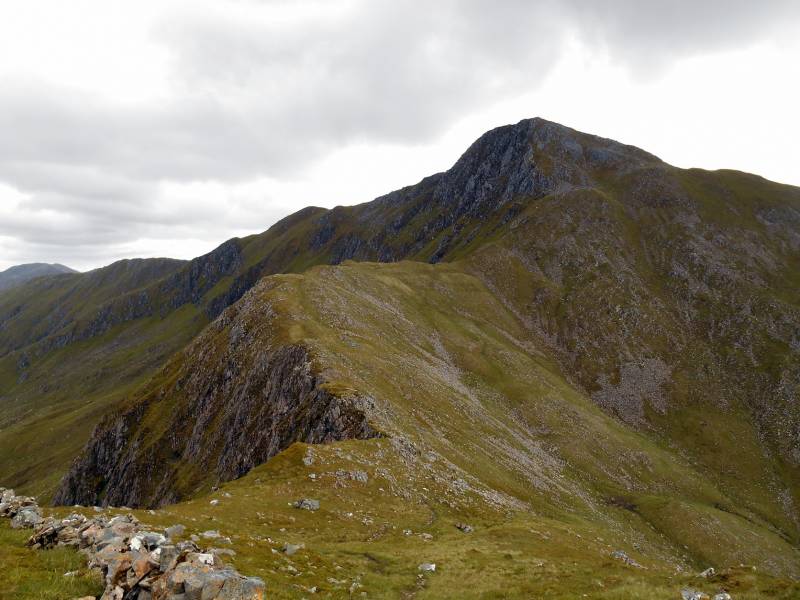 View back to Sgúrr nan Saighead and Sgúrr Fhuaran from Beinn Bhuidhe
I headed for the last sister, Sgúrr na Moraich and then returned to the col between Beinn Bhuidhe and Sgúrr na Moraich to avail of the track along the Allt a'Chruinn back to my starting point. This track was mucky and rough in places. It was delightful to follow the Allt from its infancy in the ooze of the col, watching it gradually grow into a substantial stream, dropping over several small waterfalls as it made its way to Loch Duich. Just before it reaches the loch and the sea it is harnessed in a hydro-electricity / water scheme. 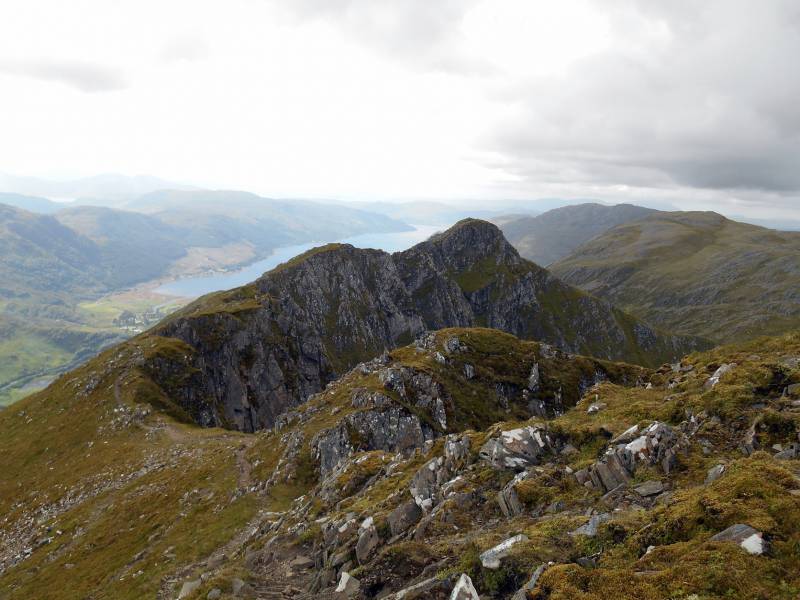 Beinn Bhuidhe and Sgúrr na Moraich from Sgúrr nan Saighead
Sgúrr na Moraich is the rounded hill to the right of the photo
{Why are these hills called the 5 sisters? According to Celtic legend, fadó fadó in Alba, a chieftain (or farmer in some versions) had 7 daughters. Two Irish brothers appeared on the scene and fell in love with and married the two youngest sisters. They headed home with their new brides to Ireland promising to send their 5 brothers over to Scotland to marry the remaining 5 unmarried sisters. The five promised brothers never arrived in Scotland, possibly because they drowned on the journey or perhaps the two brides were not a good advertisement for their sisters. Anyway, the five sisters were left awaiting their arrival and eventually asked a local sorceress to transform them into mountains so they could continue waiting patiently forever.}

NOTE: ALL information such as Ascent, Length and Creator time taken etc should be regarded as approximate. The creator's comments are opinions and may not be accurate or still correct.
Your time to complete will depend on your speed plus break time and your mode of transport. For walkers: Naismith's rule, an approximate though often inaccurate estimate, suggests a time of 5h 32m + time stopped for breaks
NOTE: It is up to you to ensure that your route is appropriate for you and your party to follow bearing in mind all factors such as safety, weather conditions, experience and access permission.