Cnoc na Toinne: Imagine a gap, it's easy if you try

Bunsen7 an hour ago
My recent visit to Cnoc Na Toinne coincided with the arrival at the top of the devil's ladder of a very large, loud group of supposedly 70 twenty-something thrillseekers, each of which was welcome...

Summit Comment High-King 7 hours ago
Parked at B* and entered the forest, (S 40812 75491 B) All nice underfoot. Followed Fergalh directions but found the mistake...it was a test.... wasn't it. Take the first turn to the LEFT not the ...

Caherbla: Views to the west.

simon3 9 hours ago
There's a fine panorama west along the Dingle Peninsul from near the top of Caherbla.

Caherbla: A walk over boggy ground with a steep ascent to finish

Collaborative entry Last edit by: simon3 10 hours ago
Start from one of the small lay-bys near Q716 052. Walk up the steep ground at the back of the lay-by heading for Caherbla.At about the 500-meter mark there is a long ridge of conglomerate rocks, ...

Coomnahorna: Watch out for the water.

simon3 a day ago
The picture shows Coomnahorna to the left and Lough Slievenashaska. You can't get round the lough on its south side shown here. You probably can't get across the lough to its north side either, th...

Collaborative entry Last edit by: simon3 a day ago
Coomnahorna is one of the summits of the Dunkerrons, the elongated mountain area that stretches down the south side of the Iveragh peninsula. It is a place of wild land with great ridges to n...

Oval route turned into a cracked egg shape by circumstance.

simon3 a day ago
The plan had been to reach Slievenashaska S (SS) from the Kerry Way to the south just west of Sneem. The Kerry Wa... walk, Len: 17.2km, Climb: 869m, Area: Coomnahorna, Dunkerron Mountains (Irelan|...

The rocky rocky road to the big hill.

simon3 a day ago
How on earth can a walk there and back to a place just over 2k away take over 3 hours?I had some forebodings about t... walk, Len: 6.3km, Climb: 301m, Area: An Bheann Mhr, Dunkerron Mountains (Irel||

Collaborative entry Last edit by: simon3 a day ago
Gorgeous to look at, An Bheann Mhór also is a superb viewpoint at the top with extensive views over Kenmare River, coast, islands, the Caha Mountains and then much of the southern Dunkerrons ...

Dereenavurrig Hill: Gorgeous colour on a hard to reach summit.

simon3 a day ago
Despite a little mist, Derrenavurrig appeared magnificent in the early morning light one September.

simon3 2 days ago
The lonely and unvisited island of Illaunleagh. The small object to the bottom left of the picture was in fact an amateur fisherman returning back to nearby Glesk Pier having caught two pollock.

simon3 2 days ago
Lamb's Island viewed from the pier to the east.
Most Recent Monthly Newsletter.
Conditions and Info
Use of MountainViews is governed by conditions and a privacy policy.
Read general information about the site.
Opinions in material here are not necessarily endorsed by MountainViews.
Hillwalking is a risk sport. Information in comments, walks or shared GPS tracks may not be accurate for example as regards safety or access permission. You are responsible for your safety and your permission to walk.
See the credits and list definitions.

I would really encourage anyone interested in walking in this valley to keep it for a clear day. The views in and from the valley and ridges are superb.
NOTE: although the route data suggest an Ascent of 1115m, this is an error and the real Ascent is closer to 730m or so. 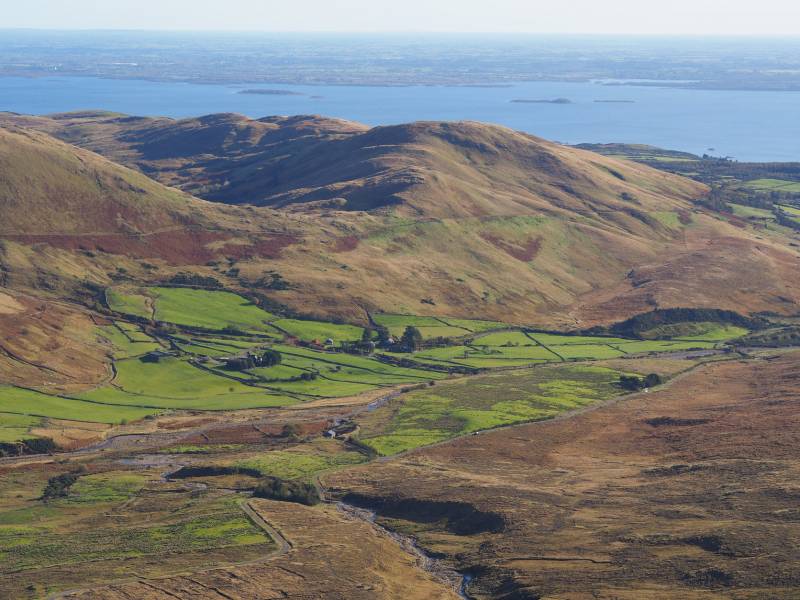 Tullymorehill and Lough Mask from Buckaun East
I found the going underfoot quite slow - lots of rocks, tussocks and rock outcrops that have to be turned or traversed. 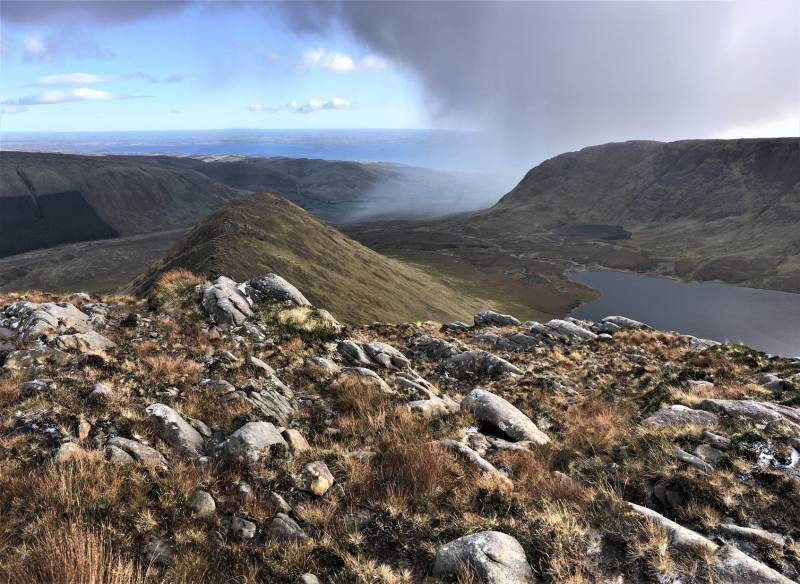 A passing shower seen from Buckaun East
I had climbed Maumtrasna a number of years ago, in mist and cloud and have always wanted to see this side of the plateau. 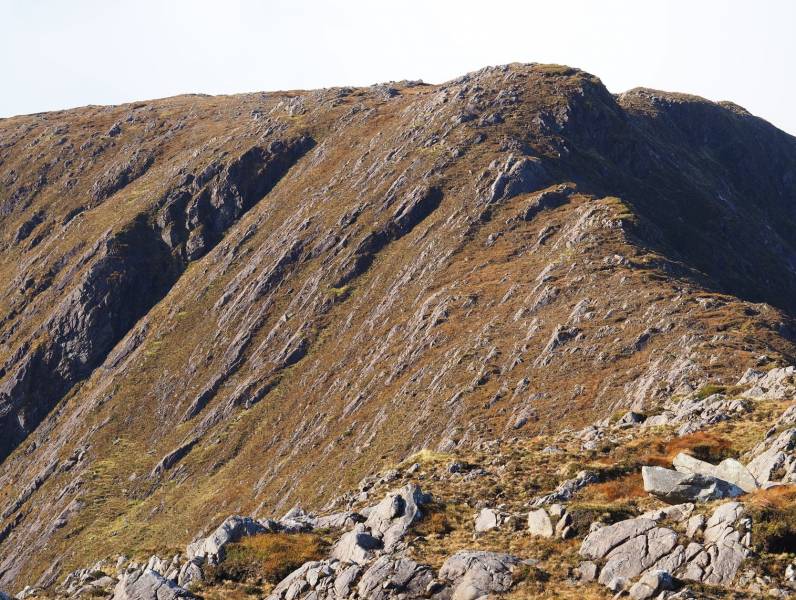 The ridge from Buckaun East to Buckaun, the reverse view of simon3's photo.
It was just about here that one of the many passing showers of the day brought my first snow of the season! 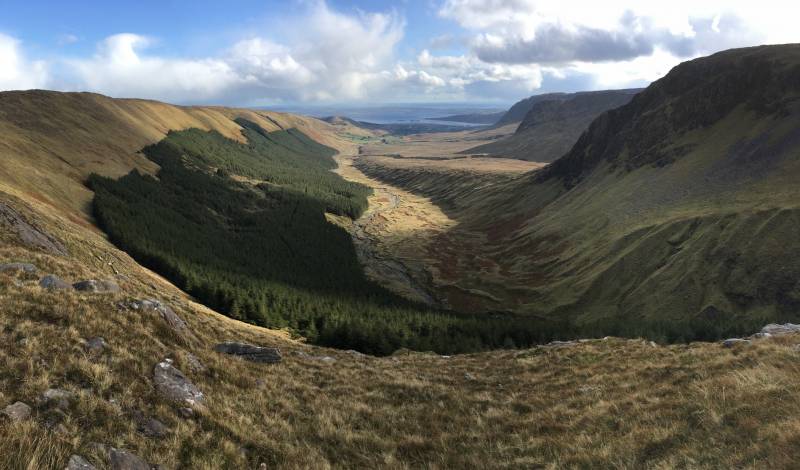 Owenbrin Valley from the ridge west of Barnahowna. The walk starts from the valley floor just before the start of the forest near the top of the picture and climbs the middle of the three ridges coming in from the right. 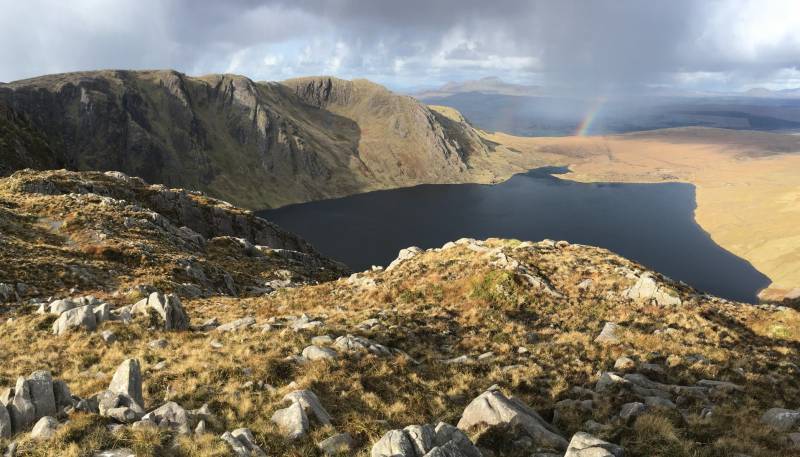 Rainbow over Lough Glenawough
The ridge from Barnahowna towards the mouth of the valley is boggy in parts though less rocky than the route so far. There are a couple of options for the descent to the valley. On meeting a fence, cross it and descend (very) steeply to the valley floor - this was the route I took and could also be used as an ascent route to the Barnahowna ridge. An alternative would be to continue along the ridge, following ilenia's track (4125). In any case, this is a wonderful area to explore!

NOTE: ALL information such as Ascent, Length and Creator time taken etc should be regarded as approximate. The creator's comments are opinions and may not be accurate or still correct.
Your time to complete will depend on your speed plus break time and your mode of transport. For walkers: Naismith's rule, an approximate though often inaccurate estimate, suggests a time of 4h 48m + time stopped for breaks
NOTE: It is up to you to ensure that your route is appropriate for you and your party to follow bearing in mind all factors such as safety, weather conditions, experience and access permission.