Collaborative entry Last edit by: markmjcampion 2 hours ago
Camenabologue is an isolated, rounded, boggy hill at the S end of the National Park. Its summit lies close to the Table Track so access is straightforward. Views are normally fairly local inc...

eamonoc 4 hours ago
Was able to park at V61182 59828 on N70 room for one car. Top just over 400mts above, a bit of a rough start to this one, followed very wet uneven ground uphill towatds the top. Clear evidenc...

Track 4796 Bob-the-juggler 5 days ago
walk, Len: 14.4km, Climb: 986m, Area: Chimney Rock Mountain, Mourne Mountains (...
Most Recent Monthly Newsletter.
Conditions and Info
Use of MountainViews is governed by conditions and a privacy policy.
Read general information about the site.
Opinions in material here are not necessarily endorsed by MountainViews.
Hillwalking is a risk sport. Information in comments, walks, shared GPS tracks or about starting places may not be accurate for example as regards safety or access permission. You are responsible for your safety and your permission to walk.
See the credits and list definitions.

Climbed Caherbarnagh using Duhallow Way for initial access. Parking is informal and limited. The Way leaves the minor road at Caherbarnagh townland to go through an obviously private field, but there are marker posts at short intervals to allay any doubts about the route. Once through the field a good track appears leading into the valley with Caherbarnagh straight ahead at the back of the valley. Caherbarnagh NW Top is to the right and closer, dominating the view.

The craggy north-east face of Caherbarnagh NW looked quite enticing from here, especially in the morning sunlight, so I headed up the left side of the face, sticking to the grassy parts. The going was somewhat steep but otherwise easy, dry and short grass underfoot, and the proximity to much exposed rock gave it a satisfyingly mountainy feel. Nearing the 600m contour I came across a surprisingly clear track going across the hillside without apparent purpose, and I briefly detoured north-west to follow it upwards before it seemed to fade out again without going near the summit or anywhere else in particular. Then the final ascent to Caherbarnagh NW top was made on heathery slopes that were harder going.
Caherbarnagh NW top from Duhallow Way: 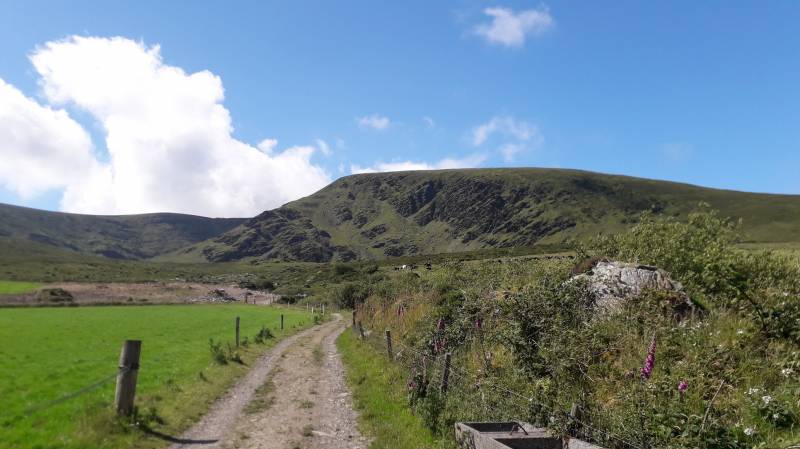 A crag on the ascent to Caherbarnagh NW: 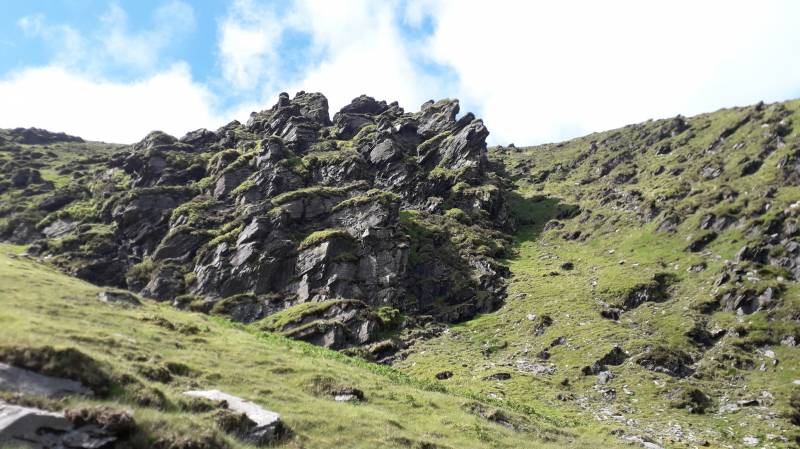 Caherbarnagh NW is a nondescript summit, but a very nice viewpoint, with a very small cairn at the highest point. Caherbarnagh main summit with its trig pillar is a short, easy walk from here. By now the sun had disappeared and it was a bit on the cold and windy side, so I didn’t hang around at the summit. I walked along the ridge north-east from Caherbarnagh for 1.5 km to a large cairn at the end of the ridge, crossing one fence on the way. Not actually an MV summit, but another nice viewpoint east over Claragh mountain and the Boggeraghs, etc. There are big cliffs just beyond this cairn, not visible from here, but which give the mountain a very impressive look when seen from the road that goes up the east flank of Claragh Mountain.

I recrossed the fence, had a rest looking down into the valley and north to the rolling hills and fertile farmland of North Cork and Kerry (and some of Limerick, I guess), then recrossed the valley to get back to the Duhallow way and down to the car. I met the landowner on the way down, and spoke to him briefly.
A very nice walk. Quiet with not a single other person on the hill this Saturday morning in June. Also, it’s one of the Irish 100 Highest Mountains, and attainable without much expenditure in terms of height gain or distance so is well worth it.

Time taken was more like 2 hours than the 1hr46 given here. The figure for descent is way off.
Lough Murtagh from high on the slopes of Caherbarnagh NW. This photo almost looks like it was taken in a steep gully, which wasn't the case: 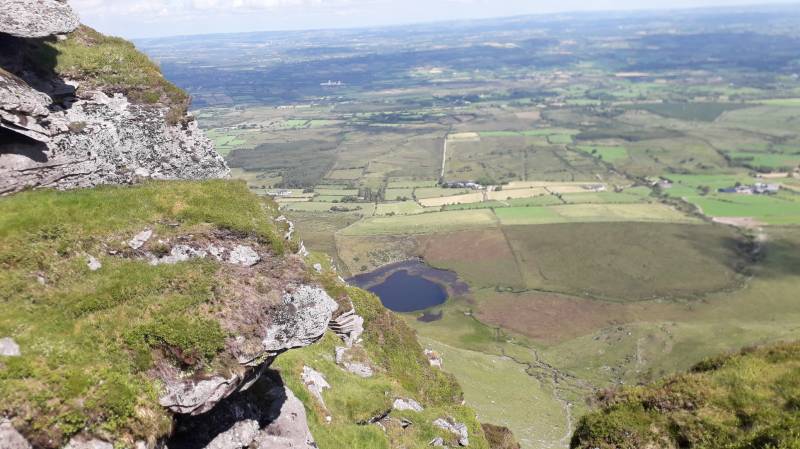 NOTE: ALL information such as Ascent, Length and Creator time taken etc should be regarded as approximate. The creator's comments are opinions and may not be accurate or still correct.
Your time to complete will depend on your speed plus break time and your mode of transport. For walkers: Naismith's rule, an approximate though often inaccurate estimate, suggests a time of 2h 8m + time stopped for breaks
NOTE: It is up to you to ensure that your route is appropriate for you and your party to follow bearing in mind all factors such as safety, weather conditions, experience and access permission.