Collaborative entry Last edit by: simon3 2 days ago
The Wicklow Way passes over the western and southern flanks of this hill and can be used to provide access to the summit from either side. It is a pleasant walk, with good views when there is a...

phonohan 3 days ago
Started from a small road almost due North of Farbreiga at G 1690 0398 (we were staying within walking distance). Only one fence to cross (easiest point is at a prominent Rowan tree), then stra...

Colin Murphy 4 days ago
Followed the obvious route up as suggested by other contributors, but returned via the forest track that runs parallel just to add some interest, which may be accessed via a stile next to the m...

markmjcampion 5 days ago
There are access issues here...the landowner will not give permission for anyone to walk or camp on his land.

Fergalh 5 days ago
Sadly this hill has not escaped the spate of gorse fires that hit Killarney and other places in May. The entire southside of the mountain has been burnt away. The grass is growing quickly on th...

Fergalh 5 days ago
Update : The track indicated by Sandman is now totally impassable by any motorised vehicle including tractors as it is overgrown with trees. In fact shortly it will be totally overgrown as in p...

Fergalh 5 days ago
Approached this from Derrynafulla SW Top by dropping down the ridge to the col between . Ground is reasonable when I did but not advisable after rain. The forest at the eastern end of the Derry...

pdtempan a week ago
We were looking for a short walk for a Saturday afternoon, and being familiar with Mullaghcarn, decided that it would be worth exploring Curraghchosaly Mountain, its lower neighbour on the west...

Carolyn105 a week ago
The summit is no longer accessible, unless you climb along edge of steep drop of quarry. Summit is disappearing

Damian120 a day ago
A good hike over the traditional Burren karst limestone. A few minor scrambles if approaching from the left. The views are astounding and offer up a picture-postcard setting that encompasses, M...

Collaborative entry Last edit by: simon3 a week ago
Black Hill is easily approached either from the well defined track starting at the car park at O04387 10862 or from the start of Lodge Lane O01999 10104. Depending on your approach, the road le...
Most Recent Monthly Newsletter.
Conditions and Info
Use of MountainViews is governed by conditions and a privacy policy.
Read general information about the site.
Opinions in material here are not necessarily endorsed by MountainViews.
Hillwalking is a risk sport. Information in comments, walks or shared GPS tracks may not be accurate for example as regards safety or access permission. You are responsible for your safety and your permission to walk.
See the credits and list definitions.

Completed this walk on 28.04.2019 after doing a looped walk of the Croagh Patrick range in the morning. Last summer I had already done a long walk of the Devil's Mother tops, on to Glennagleragh and all the way to Maumtrasna before looping back but Barnahowna seemed too far from Maumtrasna to be done that same day and I feared it would be too boggy.
Researched different possible ascents but didn't want to approach it from the north so I decided to try a route from the south-east and see how far I'd get.
I parked near a hairpin bend at M04117 63978 and followed the track in the pic below: 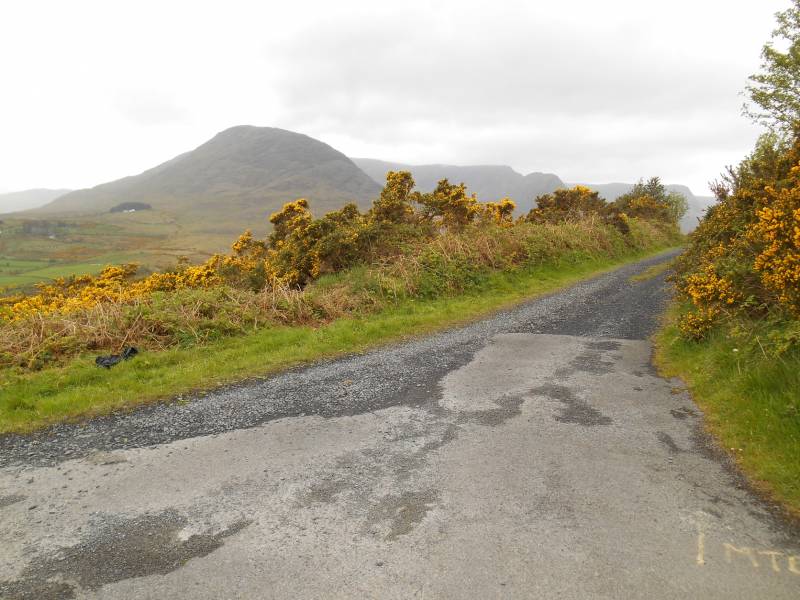 For the first few minutes it's not clear where the path will lead. If you look back you'll see Maumtrasna: 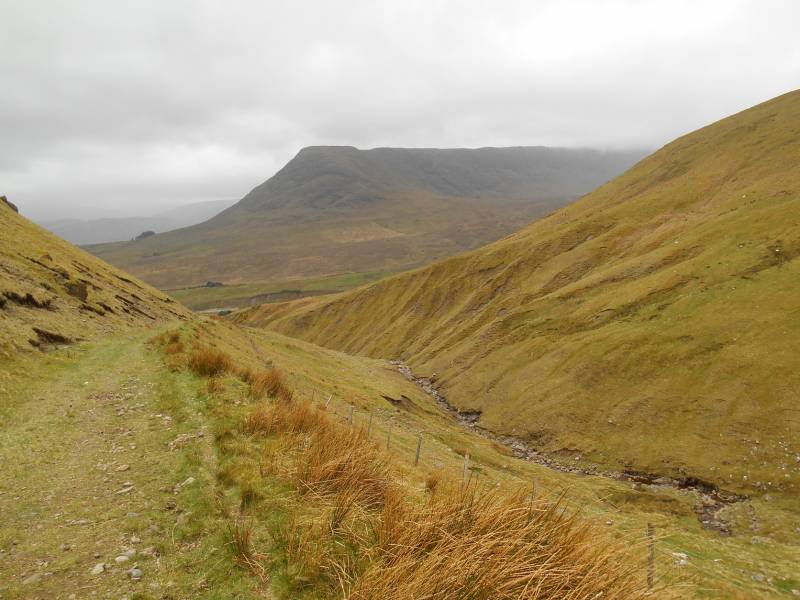 But after the first kilometre you get a glimpse of this waterfall and the path eventually swings back towards it: 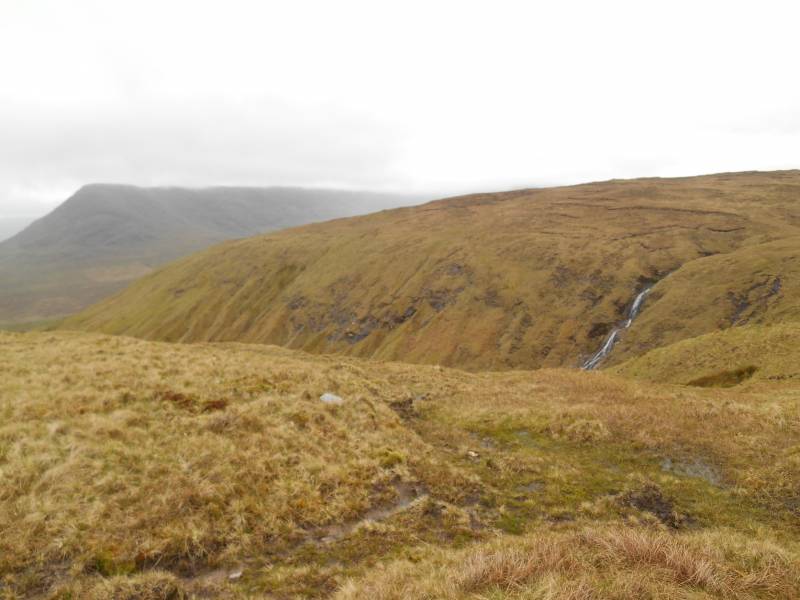 3k in your walk, around M03281 66137, leave the track and head north-west across the boggy plateau until you reach the cairn that marks the summit: 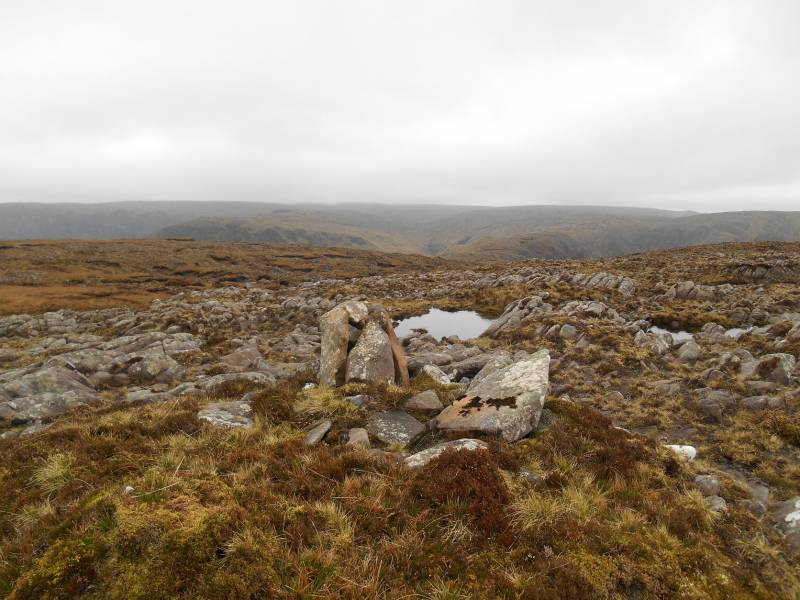 The boggy section of the walk can be monotonous and tricky to navigate after a wet spell but It was fine when I crossed it in late April. From the summit, retrace your steps back to the car/starting point.
The walk took just over 4 hours at a moderate pace, 16k round trip.

NOTE: ALL information such as Ascent, Length and Creator time taken etc should be regarded as approximate. The creator's comments are opinions and may not be accurate or still correct.
Your time to complete will depend on your speed plus break time and your mode of transport. For walkers: Naismith's rule, an approximate though often inaccurate estimate, suggests a time of 3h 44m + time stopped for breaks
NOTE: It is up to you to ensure that your route is appropriate for you and your party to follow bearing in mind all factors such as safety, weather conditions, experience and access permission.