billbaggins 6 hours ago
A’Mhaighdean and Ruadh Stac Mór are two of the more remote Munros. Their summits provide some of the best views in Sc... walk, Len: 39.5km, Climb: 1748m, Area: Loch Maree to Loch Broom (Britain) A\'||

Fergalh a day ago
Parked at 932273 and strolled over bridge to island. Turned right and at 931273 walked up a green lane past a orange house until i reached a T junction. Here i turned right and than crossed w...

Fergalh a day ago
Parked at 657638 Underneath Rinvyle Castle beside the beach. Followed track through two gates until 650641 than turn North west to the point. From here if the tide is out it is a short walk t...

Cloghercor South: Worth a visit if passing

eamonoc a day ago
Direct route up and down from R250, plenty of parking atG86210 99124, cross road to farm gate and onto open hillside for boggy trek to summit

Glengesh Hill: A boogy round trip

eamonoc a day ago
Done as part of a round trip from Glengesh gap, over Croaghavehy.

Summit Comment moggy40 5 days ago
The gate at point B now has a lock on it, so driving is out. Bike or walk is still an option

Colin Murphy a week ago
It's amazing sometimes how winter can transform an otherwise ordinary little hill into something beautiful. Slieve Rushen is a tramp through heather to a broad mound with a slightly smaller m...

Track 4793 eamonoc 2 days ago
Started this walk from Carpark at Glengesh Gap, from the start the ground was very wet and boggy and continued so ov... walk, Len: 9.0km, Climb: 463m, Area: Cruach an Bheithe, Donegal SW (Ireland) ||

Collaborative entry Last edit by: Colin Murphy a week ago
It is possible to drive up a narrow forest road to H23164 21626, (Corneen Wind Farm) where there is parking for a few cars. This will take you to about 350m ascent, however after that, depend...

Fergalh a week ago
We approached this island at low tide on a windy day hoping that the channel was narrow enough to cross. However it is around 2/3 metres across with the Atlantic swell rushing through and wit...
Most Recent Monthly Newsletter.
Conditions and Info
Use of MountainViews is governed by conditions and a privacy policy.
Read general information about the site.
Opinions in material here are not necessarily endorsed by MountainViews.
Hillwalking is a risk sport. Information in comments, walks, shared GPS tracks or about starting places may not be accurate for example as regards safety or access permission. You are responsible for your safety and your permission to walk.
See the credits and list definitions.

When we set up the club we said it was all about the economics of supply and demand - if we supplied challenging walks would there be a demand from members to do them? We get our affirmative answer in spades, once a month.
Our April sortie into the hills was in Kerry and on the menu we had some walks from Kate Kearney's to John Cronin's. You had the choice of going via Tomies/Purple or Strickeen - 2/3rds of the group headed for Tomies Rock.

It was a foggy morning but once we got above 450m it just opened up to a wondrous sight. A gentle zephyr from the south had a welcome cooling effect later in the day. These conditions decided the nature of the walk - take your time, soak it up, take loads of photos and study the route for a day when conditions are not so merciful. I'm coming up on seven years hill-walking and I hadn't been to Beenkeragh.

The first time doing a challenging route like this is always the hardest, I find. I think it's just down to not being familiar with it so it's mentally tiring, as well as the physical demands of it. Scrambling at this level, twice in the same walk, wouldn't be my cupán tae but bone dry rock has a different 'taste' to it and others are more graceful at it. 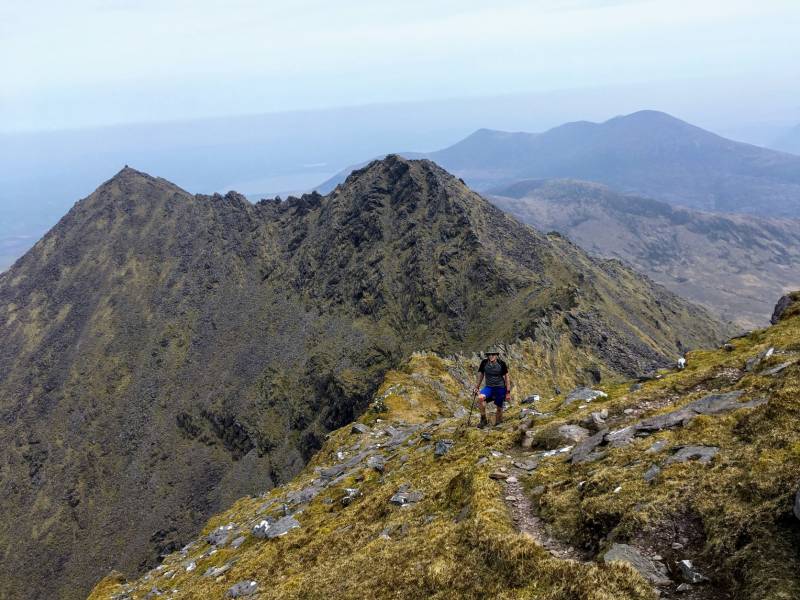 We met five walkers on Tomies/Purple, five heading to Drishana from the gap, from Drishana to Cnoc na Chuillin just three, and from there to Carauntoohil the hills were swarmed. Great to see so many young folk out though. There were a good few coming up from O'Shea's but only one person from there on, until we got back down to the track.

Make no mistake, this is a tough walk and I'd hesitate to take the full thing on of a bad day - it's just technical in places. That said, there are plenty exits down to Cronin's along the way. The only water source along the way is Glas Lough, if you're comfortable with that.

NOTE: ALL information such as Ascent, Length and Creator time taken etc should be regarded as approximate. The creator's comments are opinions and may not be accurate or still correct.
Your time to complete will depend on your speed plus break time and your mode of transport. For walkers: Naismith's rule, an approximate though often inaccurate estimate, suggests a time of 8h 20m + time stopped for breaks
NOTE: It is up to you to ensure that your route is appropriate for you and your party to follow bearing in mind all factors such as safety, weather conditions, experience and access permission.