cha 2 hours ago
Early morning start on Friday 27th May. I followed the route described in Adrian Hendroff's The Dingle, Iveragh & Beara Peninsulas Book. A bit of a trudge up to Lough Cummeenapeasta but from there...

simon3 3 hours ago
View of the summit from Benlevy, across Lough Corrib.

simon3 3 hours ago
This is a view of Knocknagussy from Mount Gable to the east. Behind the summit in this view is the Maamturks ridge, with Binn Mhairg just to the right of the top of the highest point of Knocknagus...

simon3 4 hours ago
On a summery day in 2022 our party looked down on Lough Coolin to the NE of the Benlevy ridge. To the top of the picture is part of Lough Mask and to the top right some of the village of Clonbur.

Summit Summary Collaborative entry Last edit by: simon3 4 hours ago
An obvious place to start is from Ballard, reached on a single track road at M072539 where there is parking for around 5 cars.. Proceed over the ladder style and follow the track uphill, grassy th...

InTheFade 5 days ago
A nice hike up Gleann na gCapall up to Lough Erhogh ascending up the back to saddle between Mangerton and Mangerton Nort walk, Len: 11.6km, Climb: 733m, Area: Mangerton (Ireland) ||

Collaborative entry Last edit by: simon3 4 days ago
Binn Mhairg or ‘Peak of Woe’ has a slightly off-line location. Situated as it is at the end of a ridge extending 500 metres north from Binn Chaonaigh, it is just that bit too isolated to attr...

Track 4671 Onzy 6 days ago
walk, Len: 8.3km, Climb: 471m, Area: Spain () ||
Most Recent Monthly Newsletter.
Conditions and Info
Use of MountainViews is governed by conditions and a privacy policy.
Read general information about the site.
Opinions in material here are not necessarily endorsed by MountainViews.
Hillwalking is a risk sport. Information in comments, walks or shared GPS tracks may not be accurate for example as regards safety or access permission. You are responsible for your safety and your permission to walk.
See the credits and list definitions.

This walk uses the Western Way and the Maam Turk pass to ascend Binn Bhán. Given that this hill is only 488m high, it’s a long way to go for a modest bag. On the other hand, this is one of only 3 sub-500m peaks in the MV highest rated 100, so it’s got something going for it.

Take the Western Way north-west from Ilion. There is a particularly strongly worded no dogs allowed sign here. This section of the Way is currently in good condition, with new bridges, etc. After a little over 3km of Western Way (as its surface starts to deteriorate), take an initially faint track away to the right. This track is shown on OSI 37, but is easily missable on the ground. However, it’s immediately after an enclosure with an old ruin and a small bright green aluminium cabin on the right. The track is saturated in parts, but improves further in and meanders over the ridge. Then, at around L842567, the track crosses the river that flows down from the pass at Maam Turk. Here, rather than crossing the river, I left the track and ascended. If you didn’t want to visit the pass on the ascent, it might be easier to follow the path over the over the river and find an ascent point on the slightly less rugged ground a little further north.

The Twelve Bens from the Western Way: 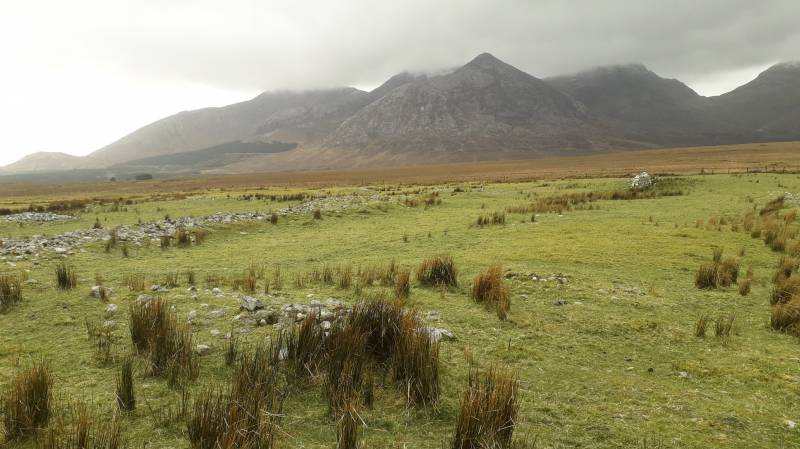 Ascending to Maam Turk, I kept the river on my left. Going was made easier by staying further up from the banks, and some faint trails were visible. A few minutes after, the pass finally becomes visible, and a short, steep, grassy climb follows.

A fence runs through the pass and up towards Binn Bhán. There’s no need to cross the fence, but if you do there’s a holy well a few feet away, marked on OSI 37 on the east side of the pass. It’s a small hole in the ground with water in it, a stream flowing down east from it, and a ring of stones around it.

From the pass it’s another short, steep climb to the summit area where a small cairn on an outcrop marks the top. The formidable rocky bulk of Letterbreckaun dominates the view to the south and the grassy, sprawling Leenane Hill to the east. Also in view are the Twelve Bens and Lough Inagh, Kylemore Lough, Mweelrea, a bit of Killary Harbour. I headed along the summit area north for about 200m to another small cairn and descended from there. Staying as far north as possible eases the angle of descent and the terrain encountered. I met up with the track again at the river crossing and followed it to the Western Way.

Possibly a good option on a day when higher summits are in cloud. As the Maam Turk pass and Binn Bhán are out of sight for much of the walk, there is no visible objective, so some navigational knowledge is needed. The most tricky section would be descending from Binn Bhán. Going south or west from the summit look from above like the most direct routes down, but the ground is uncomfortably steep. Therefore it’s better to head north first. Heading back to the pass is also possible, but again is quite steep and also adds time. There are probably easier ways up Binn Bhán from the east (Glenglosh Valley), though they would probably require asking permission, crossing fences, etc. The main advantage of this route is that access via the Western Way is good, and the only need to cross a fence is if you want to visit the well.

A dry section of the rough track off the Western Way, with Letterbreckaun in the background: 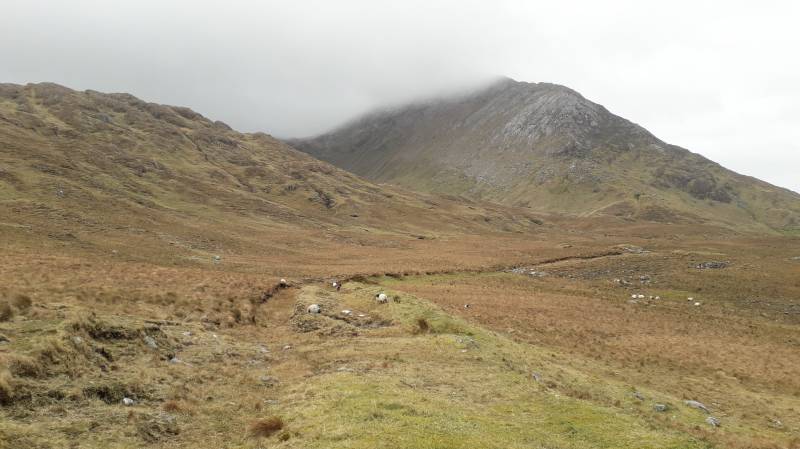 Some sheep heading for Maam Turk: 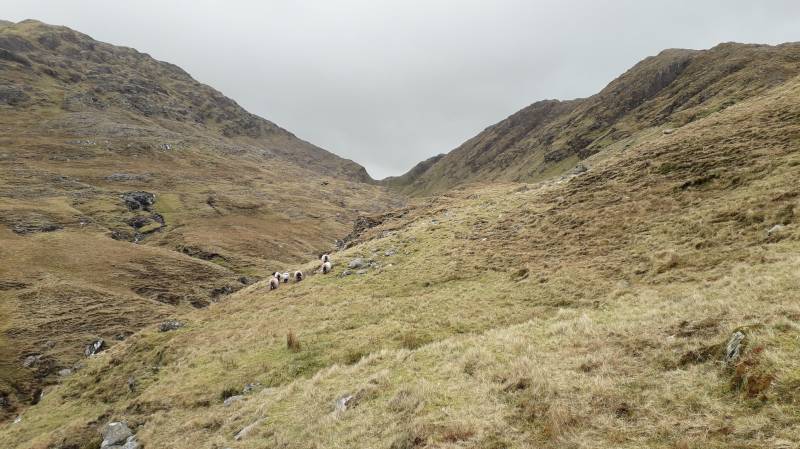 NOTE: ALL information such as Ascent, Length and Creator time taken etc should be regarded as approximate. The creator's comments are opinions and may not be accurate or still correct.
Your time to complete will depend on your speed plus break time and your mode of transport. For walkers: Naismith's rule, an approximate though often inaccurate estimate, suggests a time of 3h 30m + time stopped for breaks
NOTE: It is up to you to ensure that your route is appropriate for you and your party to follow bearing in mind all factors such as safety, weather conditions, experience and access permission.