Bunsen7 a day ago
There are fantastic views from this top of the Coum and the Nire Valley. It is also relatively easy to reach. There is a farmer's track which leads all the way up from the Nire Valley, and include...

Collaborative entry Last edit by: simon3 2 days ago
Corriebracks is an extremely flat summit with no particular feature on the top. It has reasonably good long range views from the top, including the Silsean and Moanbane area. It could be cons...

dino 5 days ago
I followed Track 2065 by Peter Walker to keep me right as I followed the many windfarm tracks and didn't want to get lost. I found this a dreadfully dull approach as the track often dips below the...

dino 5 days ago
Really enjoyed this walk and followed Track 2094 by Garmin. Plenty of parking at the start, easy navigation along a farm track and then grazed grass and heather with good ground underfoot. Th...

Geo a week ago
Continuing the route of track 3323 having already done the North East Top.This is another hill adorned like everywhere else on this part of the Ox mountains, with peat hags of all sizes and s...
Most Recent Monthly Newsletter.
Conditions and Info
Use of MountainViews is governed by conditions and a privacy policy.
Read general information about the site.
Opinions in material here are not necessarily endorsed by MountainViews.
Hillwalking is a risk sport. Information in comments, walks or shared GPS tracks may not be accurate for example as regards safety or access permission. You are responsible for your safety and your permission to walk.
See the credits and list definitions.

This is a short route up Doughruagh and Doughruagh South Top from the shores of Kylemore Lake. On the n59 about 2km East of the Abbey entrace there is a small gate at the roadside giving on to a small clearing with trees beyond. Head to the right edge of the clearing and follow the line of least resistance through the trees. It looks unappetizing but after 2 or 3 minutes of twisting, turning and fighting with branches you will exit the trees under a small exposed rock face and from here it’s all open hillside.

Heading for the col between Doughruagh and Garraun SW Top would give the most gentle ascent. This route heads further west first to come out at a nice viewing point at the 200m contour, looking down on the Kylemore valley, the Abbey, and some coastline. The ascent north-west to the summit from here is convoluted, some boggy ground and also round and over a succession of crags of blackish gabbro. Some short, minor scrambles can be attempted or avoided. 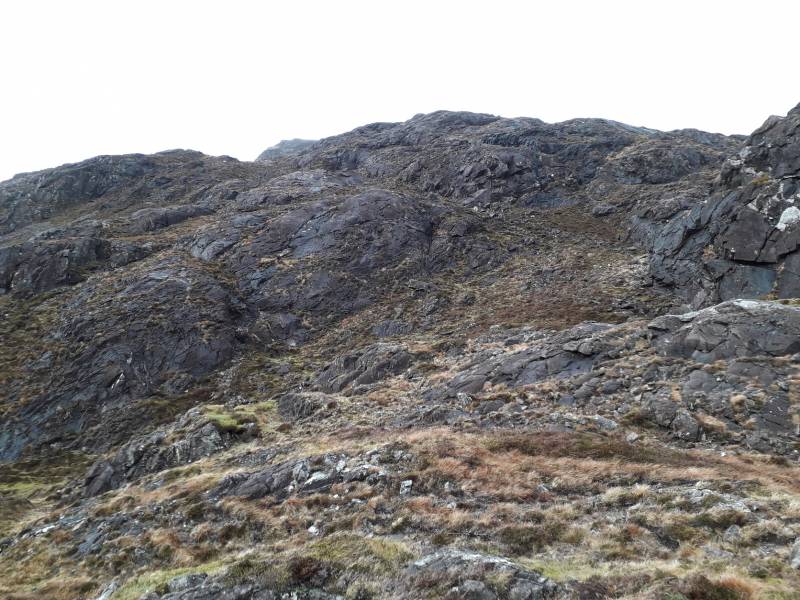 For the descent I ended up heading more or less straight for the col, as descending on the steeper slopes further south was, after the near incessant rain of recent days, slippery and uncomfortable. From the col there was a detour to a conspicuous crag at L 766 590. This crag has a small cairn at the top.

Water streaming down a rock outcrop. It didn't rain during the walk, and I don't think it had rained that day at all, so this was the legacy of a very wet month: 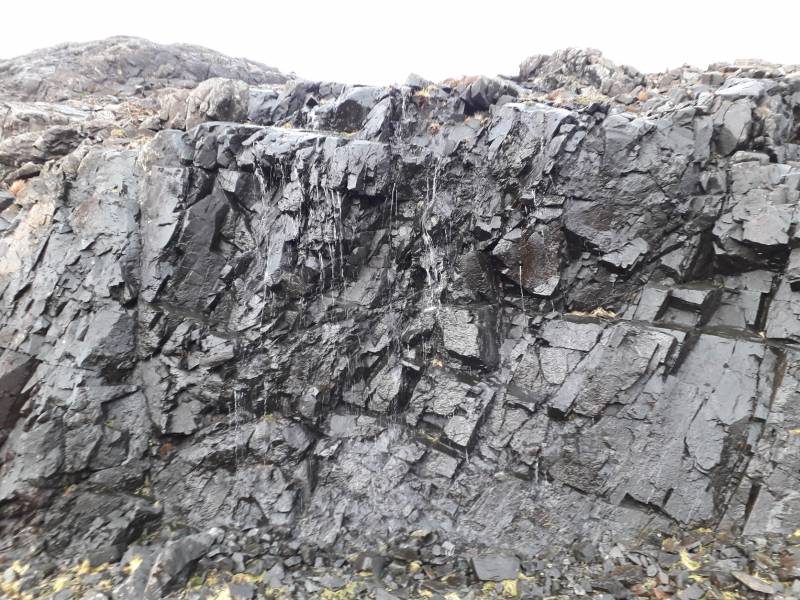 The most important part of the descent is to have an idea of where to enter the trees at the bottom. The aforementioned conspicuous crag is a good marker from the higher slopes – keep it well to your left – or visit it then turn sharp right (west), as I did. Descending the hill to the right of the crag, and easily visible from it, is a narrow stream with sometimes steep banks. You have to cross this stream at an appropriate point and aim to enter the trees a little to the right of the stream. Another 2-3 minutes pushing through the trees will see you back at the clearing. 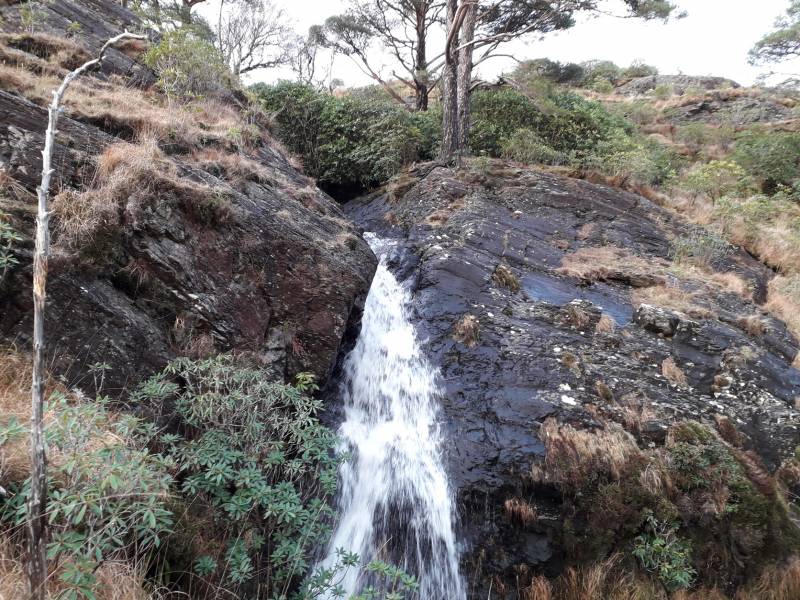 This route took 1hr 43min rather than the 1hr 28min given here. Descent was about 480m. And distance according to Garmin was 5.48km rather than the 7km that appears here!

NOTE: ALL information such as Ascent, Length and Creator time taken etc should be regarded as approximate. The creator's comments are opinions and may not be accurate or still correct.
Your time to complete will depend on your speed plus break time and your mode of transport. For walkers: Naismith's rule, an approximate though often inaccurate estimate, suggests a time of 2h 14m + time stopped for breaks
NOTE: It is up to you to ensure that your route is appropriate for you and your party to follow bearing in mind all factors such as safety, weather conditions, experience and access permission.