Forum: General simon3 5 hours ago
Is this Caher in the Reeks?

Colin Murphy 7 hours ago
I did this as part of a three-top loop taking in Long, Laghtnafrankee and Laghtnafrankee SW, returning via the valley to the N to rejoin the track at roughly point S21520. Long Hill itself is aptl...

jop68 9 hours ago
hi what is this structure on top of caher ? too small for a person ,just a cairn ?

pdtempan a week ago
We were looking for a short walk for a Saturday afternoon, and being familiar with Mullaghcarn, decided that it would be worth exploring Curraghchosaly Mountain, its lower neighbour on the west si...

Damian120 4 days ago
A good hike over the traditional Burren karst limestone. A few minor scrambles if approaching from the left. The views are astounding and offer up a picture-postcard setting that encompasses, M...

Collaborative entry Last edit by: simon3 5 days ago
The Wicklow Way passes over the western and southern flanks of this hill and can be used to provide access to the summit from either side. It is a pleasant walk, with good views when there is a...

phonohan 6 days ago
Started from a small road almost due North of Farbreiga at G 1690 0398 (we were staying within walking distance). Only one fence to cross (easiest point is at a prominent Rowan tree), then stra...

Colin Murphy a week ago
Followed the obvious route up as suggested by other contributors, but returned via the forest track that runs parallel just to add some interest, which may be accessed via a stile next to the m...

markmjcampion a week ago
There are access issues here...the landowner will not give permission for anyone to walk or camp on his land.

Fergalh a week ago
Sadly this hill has not escaped the spate of gorse fires that hit Killarney and other places in May. The entire southside of the mountain has been burnt away. The grass is growing quickly on th...

Fergalh a week ago
Update : The track indicated by Sandman is now totally impassable by any motorised vehicle including tractors as it is overgrown with trees. In fact shortly it will be totally overgrown as in p...

Track 4499 TheDutchman 2 days ago
walk, Len: 17.0km, Climb: 397m, Area: Fahane, Mizen/Sheeps Head (Ireland) Fahan...
Most Recent Monthly Newsletter.
Conditions and Info
Use of MountainViews is governed by conditions and a privacy policy.
Read general information about the site.
Opinions in material here are not necessarily endorsed by MountainViews.
Hillwalking is a risk sport. Information in comments, walks or shared GPS tracks may not be accurate for example as regards safety or access permission. You are responsible for your safety and your permission to walk.
See the credits and list definitions.

I was drawn back by the lure of completing the 2002 - 12 Bens Challenge route. I got the details from John J. Cotter who completed it that day - one of just a handful. No GPS or ViewRanger back then and no option to pick a good day. I was spoiled really.

I did a recce of the start the evening before. It was going to be dark when I was starting so best find a parking space and look at that dyke, about 10m in where you leave the road, and can get wet to the waist very easily. 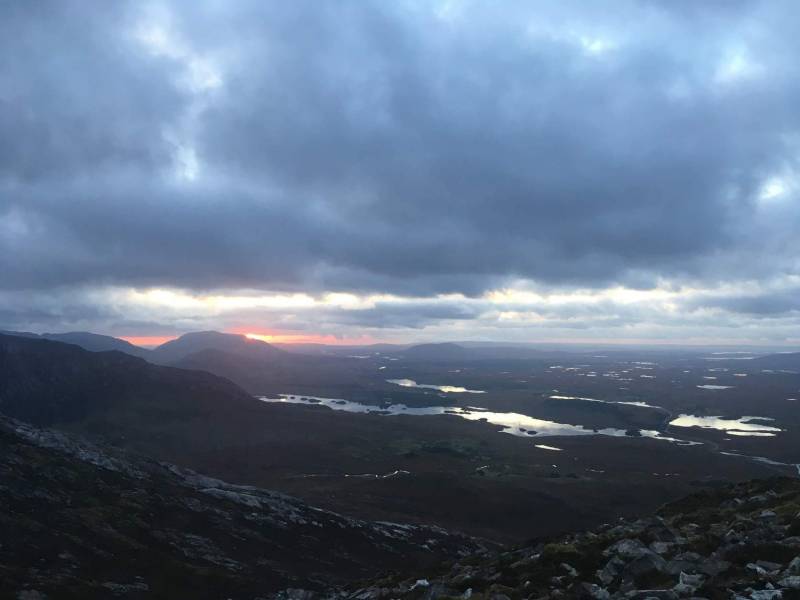 The sunrise was good but not spectacular. But, I knew from early on that it was a day for the photos and adding time for taking them.

I think it’s fair to say that one ‘picks’ their way along the quartzite terrain as opposed to walking it. You think you’ve a bit of momentum going and you stall to have a look at what might be the least troublesome way up or down these mountains. 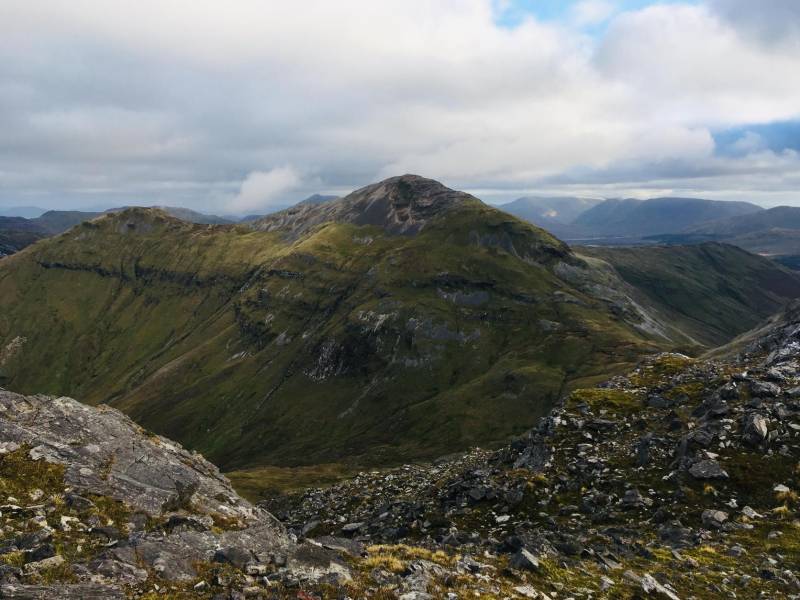 Everything is going swimmingly as I arrive on Bencullagh; but between here and Benbrack the terrain is new to me. There may be an easier way to get between these two and I suppose in time I’ll figure it out. The above route down is steep and rough. A bit more gradual descending/contouring along the NE side of Maumonght might work.

There are lots of holes to step into as you approach the Polladirk and the the SW side of Benbrack looks intimidating. But, you’ll slowly pick your way up with a bit of zig-zagging. You can also look forward to a bit of a rest between Benbrack and Mám Eidhneach - a descent and relative ‘flat’ for 4.4km. There’s not much point in contouring high SW of Benfree and Benbaun. I was forced down 50m as the river channels were tricky to traverse. 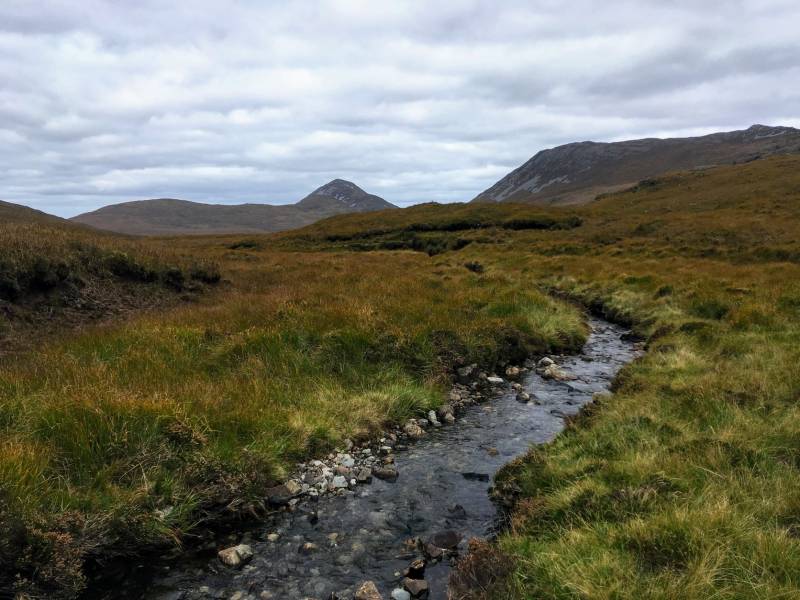 I underestimated the climbing and distance from Bencollaghduff to Derryclare. Maybe it was just that I hadn’t done it in that direction before and I was full of beans, early, on those other walks. In any event, after a struggle to get purchase on the scree slopes of Bencorr and leaving Derryclare, the job was done. The legs were totally confused when they hit the boreen - ‘What’s with this flat, even ground?. Do you want to run?’. I jest. 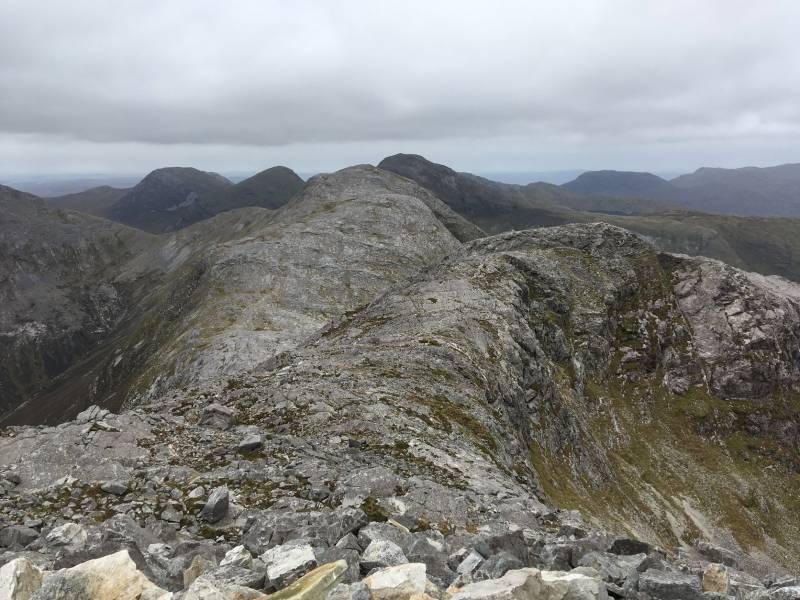 It’s 7.2km from where the track ends, back to the start, so a handy bit of road walking to curse close and fast oncoming traffic. You’re safer on the mountain.

NOTE: ALL information such as Ascent, Length and Creator time taken etc should be regarded as approximate. The creator's comments are opinions and may not be accurate or still correct.
Your time to complete will depend on your speed plus break time and your mode of transport. For walkers: Naismith's rule, an approximate though often inaccurate estimate, suggests a time of 10h 8m + time stopped for breaks
NOTE: It is up to you to ensure that your route is appropriate for you and your party to follow bearing in mind all factors such as safety, weather conditions, experience and access permission.