Benlettery: Most southerly Ben is a beautiful, rugged summit

Collaborative entry Last edit by: simon3, aidand, Colin Murphy a day ago
Taking the N59 to Clifden, there are two places to start from. Near L75873 48578 there is a car parking and a stile to start you off. It is then possible to go up a prominent ridge extending NE to...

strangeweaver 12 hours ago
On a day when storm Daniel scuppered my plans to ascend Masatiompa Binn na mBan offered some solace and magnificent views off to the west. It is easily taken in by a slight detour from the Dingle ...

mcrtchly a day ago
Tried to put this into comments but always fails to upload. Works OK in Motley Views. Any ideas why? I'm uploading via 3 Ireland mobile network

The three SW tops of the Twelve Bens on a Winter day.

simon3 a day ago
The walk starts to the west of Benglenisky. There used to be a forest here however it has been removed after a bog r... walk, Len: 8.0km, Climb: 616m, Area: Benglenisky, Twelve Bens (Ireland) Bengl||

Binn Gabhar: Fine peak can be completed in isolation.

Collaborative entry Last edit by: simon3 a day ago
Bengower may be approached via Benlettery or Benglenisky. For these starting points, parking, routes etc consult relevant entry. Alternatively it may be completed in its own right. Turn off N59 at...

simon3 a week ago
This walk is somewhat similar to another that has been uploaded, however it has a longer and more interesting ret... walk, Len: 17.1km, Climb: 655m, Area: Scarr North-West Top, Dublin/Wicklow (Ir|...

IT’S NOT TOO LATE!

Forum: General liz50 a week ago
Latest MountainViews walk is on Saturday 8th February (postponed from January due to adverse weather). A traverse of the main Knockmealdowns ridge. Followed by dinner and refreshments in Clonmel. ...

Collaborative entry Last edit by: simon3 a day ago
Driving towards Clifden along the N59, go 2km past the Benlettery Hostel and take the minor road on the right. I.5km along this, at point L750 499, there is a large space for parking on the right,...

Forum: Suggestions simon3 2 months ago
MountainViews has been describing "Coastal Hills" for the island of Ireland. They are places which typically overlook the sea and may form part of coastal walks. They are defined as being within ...
Most Recent Monthly Newsletter.
Conditions and Info
Use of MountainViews is governed by conditions and a privacy policy.
Read general information about the site.
Opinions in material here are not necessarily endorsed by MountainViews.
Hillwalking is a risk sport. Information in comments, walks or shared GPS tracks may not be accurate for example as regards safety or access permission. You are responsible for your safety and your permission to walk.
See the credits and list definitions.

Starts at the west end of Lough Muck. There are a couple of laybys around here to park. Route starts with a bog track that leads through a fence with a makeshift gate to a bridge over the Culfin river. This river is quite wide and not otherwise crossable. Benchoona looks quite formidable from here, with a line of black cliffs protecting the summit. 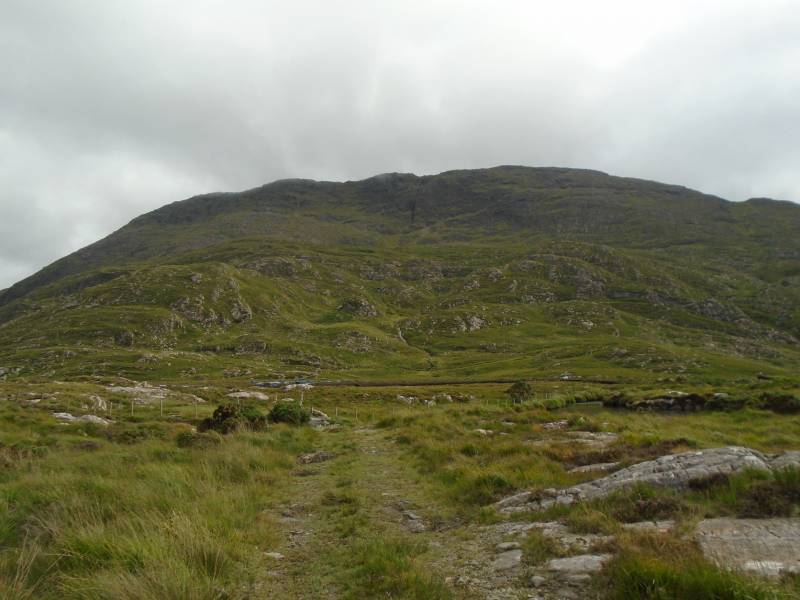 The track peters out soon after the bridge, at a working bog. The first half of the ascent is over rough but not overly steep ground. I stayed close to the stream that comes down the face of the mountain. At about the 250m contour, there is a slight drop into a lovely mini-valley with a stream running west along it. From below, I had thought the best bet from here would be a somewhat grassy patch among the cliffs to the left of the deep gully in the centre of the photo, and from here this still looked the best - or perhaps only - possible ascent. 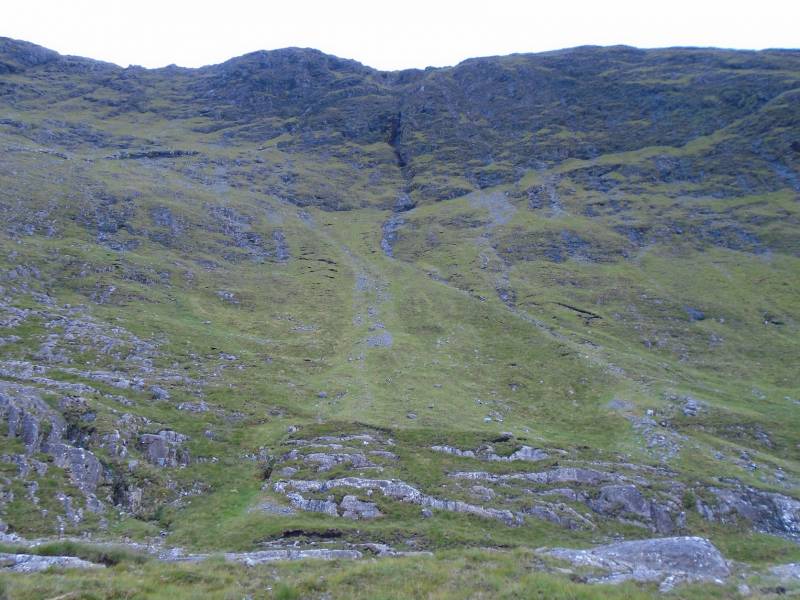 The final ascent route is on almost the extreme left of the photo above. This comes out at the summit area between Benchoona and Benchoona East Top. One thing that struck me while scrambling on the steep upper slopes is the difference between Benchoona and its neighbours in the Bens and Maamturks. The rock in the Bens/Turks tends to stay much drier than the surrounding grass/bog, and free from vegetation. The rock on Benchoona is wet, slippy and slimy, with wet grass and moss sprouting from every crevice. The mountainside also appears to be home to a very large and well-hydrated slug population, which didn't really add to the pleasure of the ascent, from my point of view. 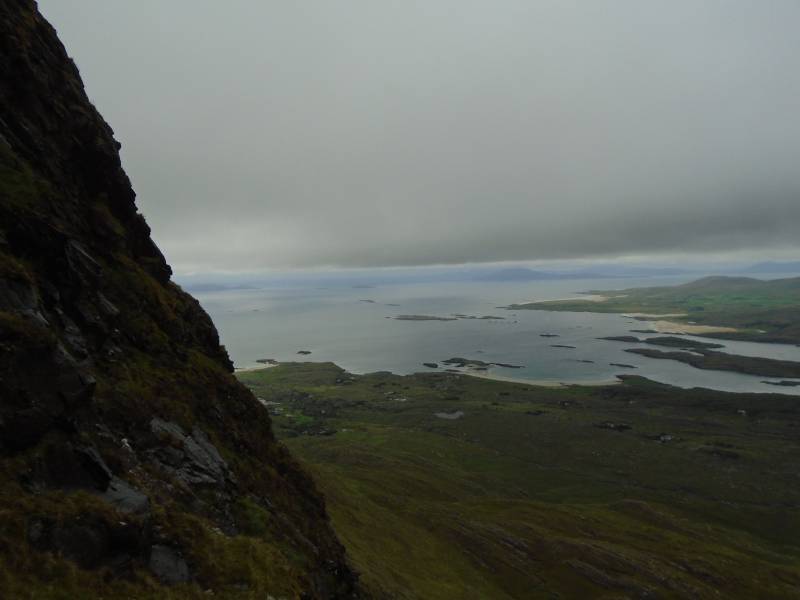 The slope I was on wasn't quite as steep as the neighbouring slope that's on the left in this picture. But it gives an idea of the steepess of the ground in the area. It was slow work, searching for the most feasible route over slippy, sometimes near vertical rock and ground so soft that bits of it became detached under my feet a couple of times. There was always a fairly straightforward option in the end. I'm not sure I'd do it again, unless maybe after a really dry spell. But it was quite rewarding to do it once.

I wandered around the top - now in mist - a bit, taking in the two listed summits. I had decided to definitely not take the same route down as I had used to get up. Earlier I surmised that if initially I took the more popular route north-west from the summit towards Lettergesh, I could turn north/north-east once I was below about the 400m contour, and miss all the cliffy parts. I did this, and it worked quite nicely for a comfortable and pleasant descent, except at the very end where the dogleg in the route results from me heading for a working bog that wasn't the one I had passed on the way in. There was some unpleasantly swampy ground around here, even after the drier than normal summer. This aside, a similar line to this might be a decent option for ascent as well. 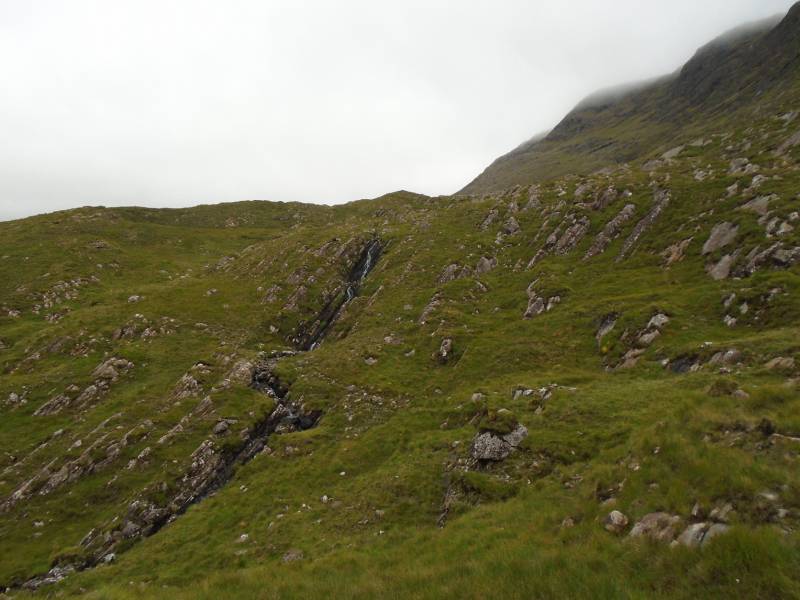 Note: ALL information such as Ascent, Length and Creator time taken etc should be regarded as approximate. The creator's comments are opinions and may not be accurate or still correct.
Your time to complete will depend on your speed plus break time and your mode of transport. For walkers: Naismith's rule, a rough and often inaccurate estimate, suggests a time of 2h 3m + time stopped for breaks
Note: It is up to you to ensure that your route is appropriate for you and your party to follow bearing in mind all factors such as safety, weather conditions, experience and access permission.