BrianKennan a day ago
This walk starts from the Scout Centre at Lough Dan with a 3km hike (1 hr) up to the peak of Scarr.The route follows... walk, Len: 19.2km, Climb: 725m, Area: Scarr, Wicklow (Ireland) Scarr, Scarr N||

Knockmulanane: Airy ridge with sea and upland views. Cliffs to the east.

Collaborative entry Last edit by: simon3 3 days ago
From the east: start from the car park beside Lough Annascaul Q58253 05092 and ascend directly up the steep eastern slope. This becomes tricky around 400m elevation when you must ascend throu...

Ben Crom: To the heart of Mourne

pdtempan 2 days ago
Ben Crom has a very central, and therefore quite remote position in the Mourne Mountains, which probably explains why I hadn't ticked it off on my Local 100 till now. If the range has a centr...

Collaborative entry Last edit by: simon3 3 days ago
From the west: Start from the car park at the Connor pass Q49054 05587 .Cross the main road and head due east uphill following a distinct track for 200 meters, then keep east and had for An C...

Collaborative entry Last edit by: simon3 3 days ago
Glance at the map and you will see that Killary Fjord bends around this summit. From near the top you can see water for 180 degrees. Seven major Connemara or south Mayo ranges are visible fro...

Crockastoller: No Crock of gold on this one

eamonoc 4 days ago
Up for a few days walking in Donegal, visited Moylenanav and took a look at Crockastoller away in the distance and decided to take the long trek out to it, headed towards west shoulder of Cro...

pdtempan 4 days ago
Last week (13/01/22) I did a walk connecting three of these four peaks. I was lucky enough to be joined by author and archaeologist Pádraig Meehan, who has researched and written about the wh...

pdtempan 4 days ago
I've been a frequent visitor at the Carrowmore Megalithic Cemetery for quite a few years now, sometimes bringing tour groups, sometimes visiting on my own account. I've travelled down a coupl...

There's close, and there's too close

Forum: General pdtempan 6 days ago
Thanks for that information about the stag that gored the ESB worker, bunsen7. It was an extremely serious incident. North Tipperary is not an area I would associate with deer, but once they...

Bibliography Peter Walker 2 months ago
There is something about hill walkers and our need to complete lists. Few of us are ever likely to get near the Seven Summits; that is the highest points on every continent. A much more manag...
Most Recent Monthly Newsletter.
Conditions and Info
Use of MountainViews is governed by conditions and a privacy policy.
Read general information about the site.
Opinions in material here are not necessarily endorsed by MountainViews.
Hillwalking is a risk sport. Information in comments, walks or shared GPS tracks may not be accurate for example as regards safety or access permission. You are responsible for your safety and your permission to walk.
See the credits and list definitions.

Park at layby at bridge 100m south-west of old school at Derryvoreada. No fences, straight onto open hillside from here. Keeping school to the left, head straight up the steep hillside for an increasingly rocky ascent to the top. Several short scrambles on the route up. Coming out onto summit area, the track shows I mistakenly headed immediately right (north-east) to the fake summit with cairn, rather than bearing slightly left (north) to the actual summit with bigger cairn further back. Navigation in mist would be an issue. 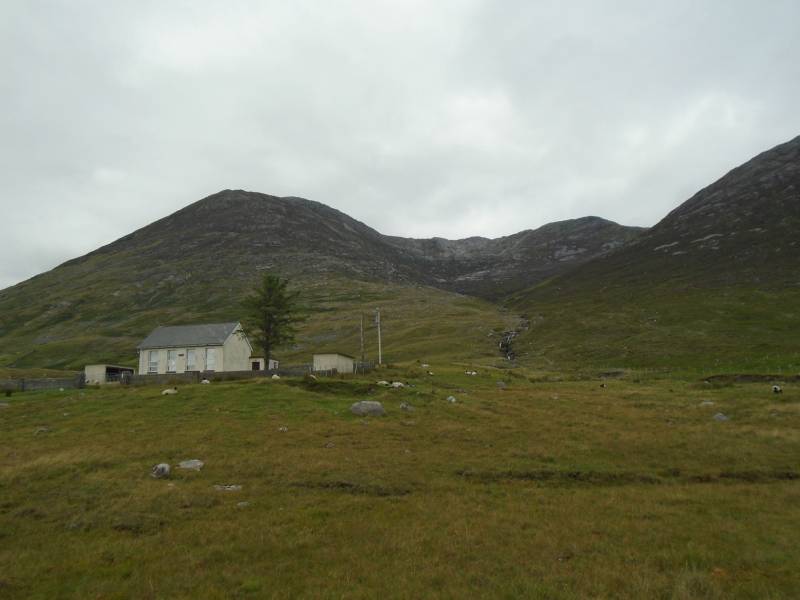 Route down involved heading south at the first opportunity to avoid down-scrambling. So after the beginning the descent is all on heathery and grassy slopes, initially steep to very steep, but then moderating. Finally a gentle descent alongside the river, all the way to the bridge to meet the car. 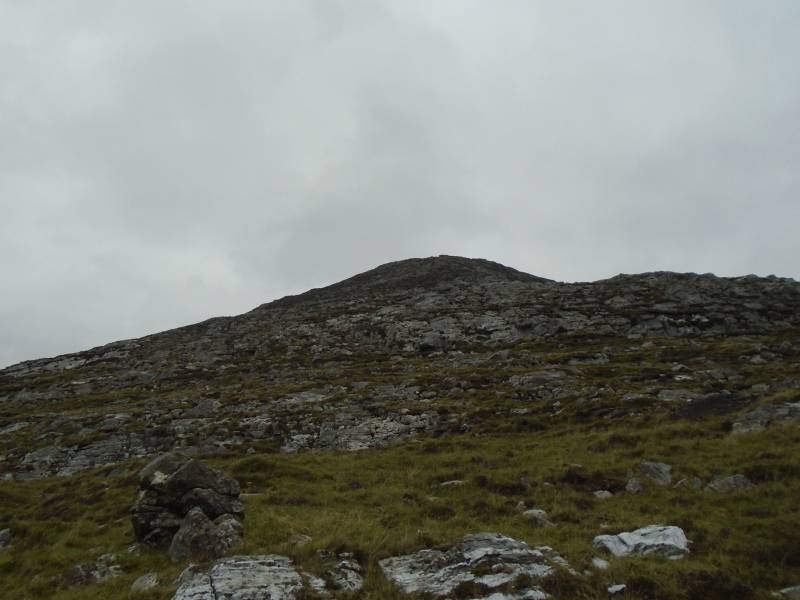 Experimental route, not established or described anywhere, that I know of. Challenging despite the short length because of the continuously steep ground and need to scramble. Very accessible and handily reached from the roadside. Relentless ascent makes it a good test of fitness and ability on particularly rough, steep ground.

Stats slightly garbled as I turned off GPS too early. Descent should match ascent. Distance 5.34km. Actual time was about 1h 37m, rather than 1h 29m. 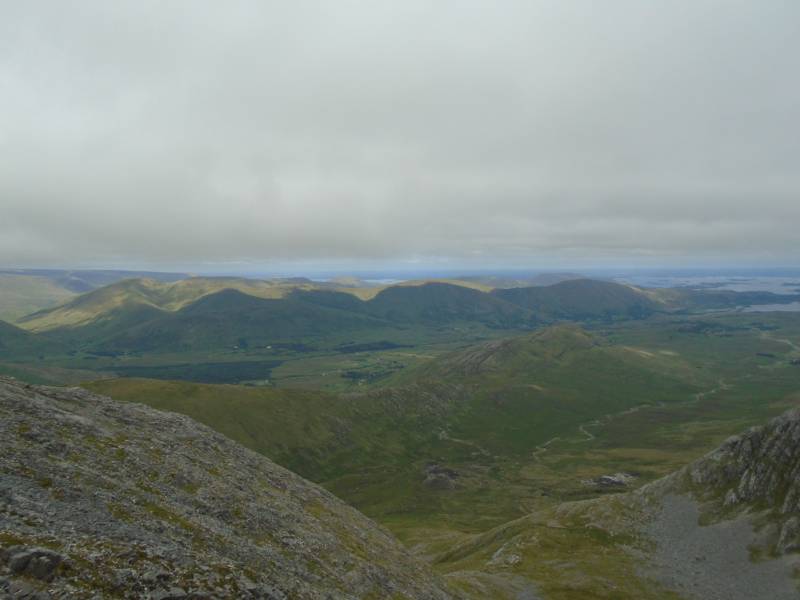 NOTE: ALL information such as Ascent, Length and Creator time taken etc should be regarded as approximate. The creator's comments are opinions and may not be accurate or still correct.
Your time to complete will depend on your speed plus break time and your mode of transport. For walkers: Naismith's rule, an approximate though often inaccurate estimate, suggests a time of 1h 58m + time stopped for breaks
NOTE: It is up to you to ensure that your route is appropriate for you and your party to follow bearing in mind all factors such as safety, weather conditions, experience and access permission.