Track 4271 David-Guenot a week ago
An exploration of a beautiful ridge along the Ariège/Haute-Garonne border, starting from the Col du Portet-d'Aspet walk, Len: 17.7km, Climb: 1135m, Area: France, Occitanie () ||

Cruagh Island: View of the island

Cruagh Island: View of the island

Forum: General liz50 2 weeks ago
Mountainviews members (and friends) meetup walk will now take place on Saturday 8th February along the Knockmealdowns ridge.If you are interested and would like further details please contact Liz ...

Maumfin: View of the summit

simon3 a day ago
A record of how Maumfin looks.

Knockaunbaun: view of the summit.

simon3 a day ago
This is a picture of Knockaunbaun from the south.

Collaborative entry Last edit by: simon3 a day ago
Visiting this summit would usually be an extension of a trip to Tully Mountain.

doogleman 3 days ago
Climbed 26-04-18 as part of 32 County High Point Challenge in aid of SLMRT.This was the fifth & sixth counties of my challenge and a I had never been there before. After finishing a days work in P...
Most Recent Monthly Newsletter.
Conditions and Info
Use of MountainViews is governed by conditions and a privacy policy.
Read general information about the site.
Opinions in material here are not necessarily endorsed by MountainViews.
Hillwalking is a risk sport. Information in comments, walks or shared GPS tracks may not be accurate for example as regards safety or access permission. You are responsible for your safety and your permission to walk.
See the credits and list definitions.

Conigar is certainly wild and has reasonable views but would not be described as particularly dramatic to look at.The summit area had a pond with, as of a warm May day, an abundance of insect and tadpole life. The curious and unusual red colour in this picture was apparently caused by the colour of the water and coating on rocks in it.
Moving towards Foilastakeen there are a series of small lakes surrounded by wild, untracked land.
The Beara-Breifne way crosses the ridge and there is a stile with signs. 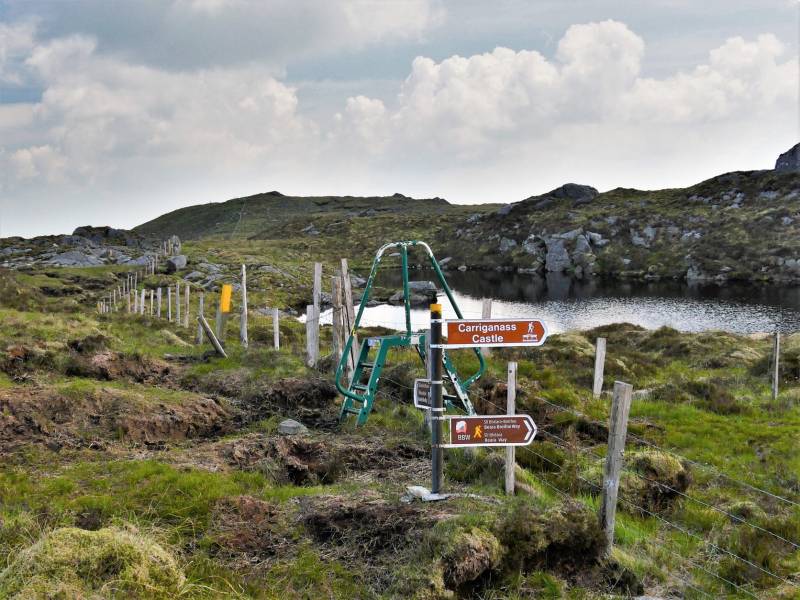 The summit of Foilastakeen is even less exciting than that of Conigar however there are good views of Gougane Barra.
For variation the return went nearer to the edge of Gougane Barra. The land here becomes very rough and also there a number of fences. Look out for occasional stiles which are sometimes available.
.

Note: ALL information such as Ascent, Length and Creator time taken etc should be regarded as approximate. The creator's comments are opinions and may not be accurate or still correct.
Your time to complete will depend on your speed plus break time and your mode of transport. For walkers: Naismith's rule, a rough and often inaccurate estimate, suggests a time of 2h 24m + time stopped for breaks
Note: It is up to you to ensure that your route is appropriate for you and your party to follow bearing in mind all factors such as safety, weather conditions, experience and access permission.