pdtempan 5 hours ago
Last week (13/01/22) I did a walk connecting three of these four peaks. I was lucky enough to be joined by author and archaeologist Pdraig Meehan, who has researched and written about the whole Ca...

pdtempan 5 hours ago
I've been a frequent visitor at the Carrowmore Megalithic Cemetery for quite a few years now, sometimes bringing tour groups, sometimes visiting on my own account. I've travelled down a couple of ...

Errigal from the North

Track 2223 gerrym 9 hours ago
An approach to Errigal from the north, starting at little Procklis Lough, near to the Salmon farm. The start point i... walk, Len: 15.6km, Climb: 871m, Area: Errigal, Donegal NW (Ireland) An Earaga||

Onzy 3 days ago
Purple range over a misty Muckross Lake...

Onzy 3 days ago
Torc Mountain over a misty Muckross Lake

There's close, and there's too close

Forum: General pdtempan a day ago
Thanks for that information about the stag that gored the ESB worker, bunsen7. It was an extremely serious incident. North Tipperary is not an area I would associate with deer, but once they...

Maumturkmore: A very rugged hill, distant from everything.

markwallace 4 days ago
Maamturkmore, called Binn Bhán on the Harvey map, is a minor but very rugged and not easy to get to peak that I wanted to add to my climbs in the Maamturks. I had also failed to reach the nea...

Collaborative entry Last edit by: simon3 4 days ago
Beendarrig is a straightforward climb. The Kerry Way passes close to the summit. Follow the 'yellow man' signs from either the Bridia Valley or from near Lough Acoose. There are wonderful vie...

Track 4595 simon3 a week ago
This is yet another variation on routes from the entrance to Cloon Wood car park.It has been included because it has... walk, Len: 7.2km, Climb: 345m, Area: Prince William's Seat, Dublin (Ireland) ||

Baunreaghcong: Snow and frost combine to paint the landscape

Colin Murphy 4 days ago
Approached this hill from Capard, and was fortunate to do it in snow and frost, as it rendered the normally so-so landscape very pretty indeed. Just as well really, as the hill has little els...

Collaborative entry Last edit by: simon3 4 days ago
To the north: It is possible to start from around V76112 83996, which is on a road going past Lough Acoose. From the south, start at around V77919 81491 in the Bridia Valley using the Kerry W...
Most Recent Monthly Newsletter.
Conditions and Info
Use of MountainViews is governed by conditions and a privacy policy.
Read general information about the site.
Opinions in material here are not necessarily endorsed by MountainViews.
Hillwalking is a risk sport. Information in comments, walks or shared GPS tracks may not be accurate for example as regards safety or access permission. You are responsible for your safety and your permission to walk.
See the credits and list definitions.

The April Na Sléibhte Club walk was deferred so as not to clash with the Knockmealdown Crossing and Maamturks Challenge. The third Saturday in April turned out to be a smashing day. Brilliant sunshine but with a nice cool breeze.

Firstly, the start of this walk could be improved. Sometimes taking a direct line isn’t a great idea. So to avoid the very wet ground, multiple gates and many fences I’d suggest following the main track that goes out to the West and then turns back in. If you're doing a linear, ring the pub before hand and ask if you can leave a car or two outside. There's no issue but just out of courtesy.

The Country Boundary line has a fence for 80%/85% of this route, and where it’s missing it’s pretty featureless. We didn’t summit Bealick as we just wanted to have a look down on Guagán Barra. Ulsterpooka was on a bagging mission so his 3763 track is slightly different. No need to go South of Coomroe either, I just wanted to have a peek down the glen.

Lakes galore along the route but no real flow out of them. This isn’t easy walking. There are no real visible tracks and the rough wet ground will sap the energy from you. Last time I was here, in 2014, I had very little visibility so it was good to see the surrounding area from Knockboy. 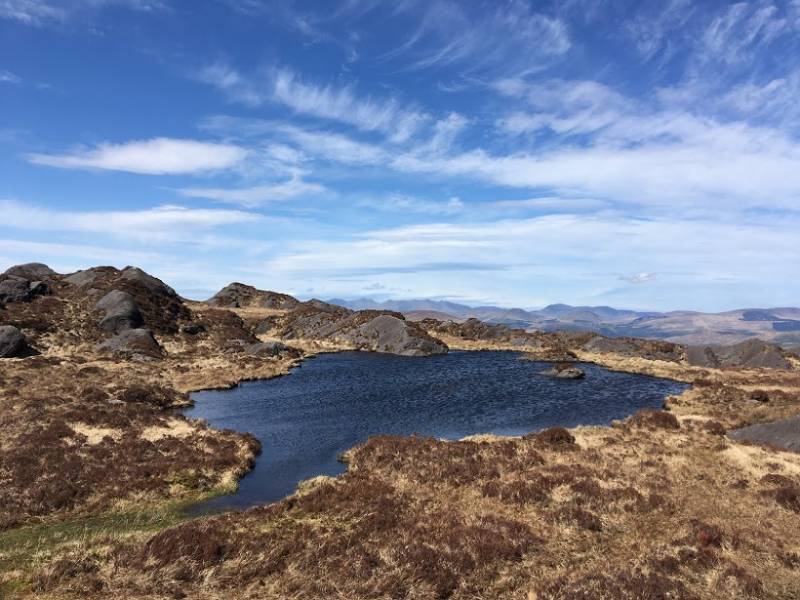 The name ‘Priests Leap’ got the better of my curiosity so I had to look it up when I got home. It’s the highest pass road in Munster, at 463m. The place name comes from an old local legend and the full details are on Wikipedia. 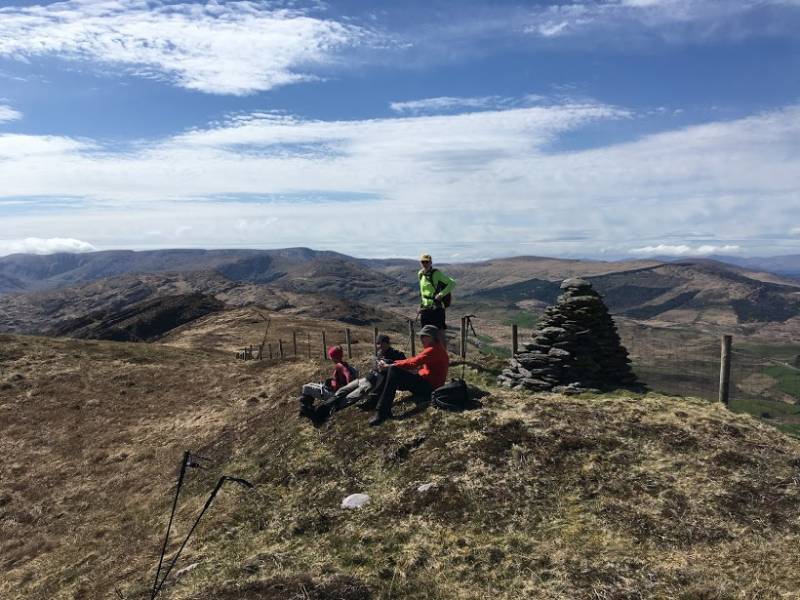 Nine and a half hours on the mountain, on a beautiful day, and we met no one. It’s not walked that much and I don’t know why.

NOTE: ALL information such as Ascent, Length and Creator time taken etc should be regarded as approximate. The creator's comments are opinions and may not be accurate or still correct.
Your time to complete will depend on your speed plus break time and your mode of transport. For walkers: Naismith's rule, an approximate though often inaccurate estimate, suggests a time of 9h 52m + time stopped for breaks
NOTE: It is up to you to ensure that your route is appropriate for you and your party to follow bearing in mind all factors such as safety, weather conditions, experience and access permission.